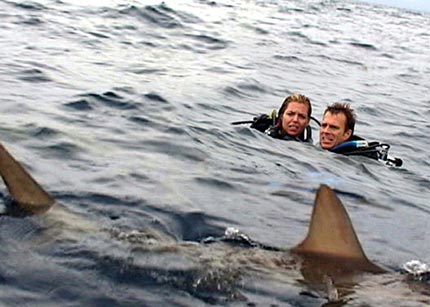 It has been hailed as the new Blair Witch Project, a low-budget horror film that delivers some of the most terrifying scenes ever put on film.

Open Water, an independent movie using little-known actors, has earned rave reviews and is expected to draw big crowds when it opens in America next month.

The film is about two scuba divers, a husband and wife called Daniel and Susan, who are accidentally abandoned in the middle of the ocean when their tourist dive boat leaves without them. Needless to say, the sea is also full of hungry sharks. The movie is shot on grainy film to give it the 'realistic' semi-documentary look that worked so well for Blair Witch .

The movie trade bible Variety called the film 'harrowing' and a 'tour-de-force'. A host of publications as diverse as the Wall Street Journal and Rolling Stone have dubbed it 'The Blair Witch Project meets Jaws'. The movie was a hit at the prestigious Sundance film festival earlier this year.

Although Open Water does use Susan and Daniel's struggle with the sharks to dramatic effect, the film's real primal horror comes from the idea of two people abandoned at sea, miles from help and desperately alone. Long, painful sequences feature the couple contemplating their terrible fate as hunger, cold and fear begin to consume them. They start to blame each other for their horrific predicament. The film's promotional posters don't feature the sharks. Instead they show the tiny figures of two divers floating on an endless black ocean, beneath huge cloud-filled skies.

The film is devoid of special effects. Even the sharks are real. Writer/director Chris Kentis put his two stars, relative newcomers Blanchard Ryan and Daniel Travis, right in the sea with the wild animals. The sharks were manipulated by a local shark expert using chunks of bloody fish to get them to move in the right direction. 'Once too many pieces [of bait] are in the water, the sharks get worked up, and then the actors would have to get out of the water,' Kentis said.

The most horrifying aspect of Open Water is perhaps that it is based on real events. In 1998 American divers Tom and Eileen Lonergan disappeared off the Great Barrier Reef. Tom, 34, and his wife Eileen, 28, had moved away from the rest of their group. But they were left behind by their boat after its crew failed to take a proper headcount and headed back to port.

It was not until two days later, with the discovery of their belongings on the boat, that it was realised what had happened. Despite a massive sea and air search their bodies were never found. In the coming months, however, several pieces of equipment belonging to the Lonergans were discovered. They included Eileen's wetsuit, which had bite marks in it.