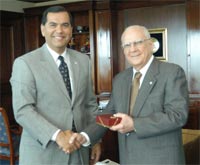 During his visit, Director Vasquez had an opportunity to meet and speak to 68 volunteers, including a group of 18 small business development trainees who will be sworn-in on July 23.

“As your training comes to a close, and your Peace Corps service begins, I encourage you to reflect on what you have learned and the excitement and challenges ahead. You have the tools to facilitate change and continue to build on the legacy of the volunteers who have served Nicaragua well for 24 years,” said Director Vasquez.

The Director’s visit included a trip to the island of Ometepe, where the Ometepe marathon had just concluded. Forty-two volunteers who helped make the marathon a success met with Director Vasquez and discussed their involvement and the planning of the event. Later, Director Vasquez met with volunteer Kurt Krahn, who was the principal organizer of the marathon. Krahn expressed the sense of accomplishment he felt after helping to arrange such a large-scale marathon, but he also credited much of the achievement to the youth group he works with, El Grupo de Jovenes Emprendedores de Ometepe (Ometepe Youth Entrepreneur Group).

The Ometepe marathon is well known and popular in the area, attracting runners and spectators from all over Nicaragua and other Central American countries. The event serves as an income generator for the island, especially for hotels and restaurants who rely on tourism. Peace Corps volunteers who contribute to the event encourage youth participation, which involves the volunteer pairing with a youth for months of training prior to the marathon. The pairing, which also includes having the youth help organize the marathon, promotes leadership and an interest in sports.

Since 1961, more than 171,000 volunteers have served in the Peace Corps, working in such diverse fields as education, health, HIV/AIDS education and prevention, information technology, business development, the environment, and agriculture. Peace Corps volunteers must be U.S. citizens and at least 18 years of age. Peace Corps service is a two-year commitment.

This story has been posted in the following forums: : Headlines; COS- Nicaragua; Peace Corps Directors - Vasquez