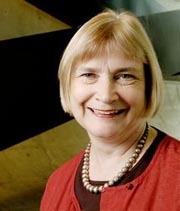 A colorful life, steeped in art
'Everything about this move seems right,' says the Contemporary Arts Center's new director

She's driving cross-country next week with her 27-year-old son and his pet boa constrictor, Princess.

While this may seem unusual, for Linda Shearer, the new director of the Contemporary Arts Center, it's just another step in the colorful, circuitous path that has led her to Cincinnati.

This is, after all, the same woman whose brother runs a boutique circus featuring his pet elephant, Flora.

Shearer, 58, grew up on a Long Island, N.Y., estate with the children of one of America's wealthiest families and gave up the stage only after classmate Jill Clayburgh outperformed her in a college play.

There's something about her.

She has a nobility of spirit yet welcomes alternative views, an asset she plans to put to good use in running one of the country's premier venues for contemporary art.

She moves into the job formerly held by Charles Desmarais, the museum's director for nine years.

Desmarias left last year, seven months after the move from the CAC's former home on Fifth Street to its stunning new building at Sixth and Walnut streets, downtown.

The Contemporary Arts Center has generated controversy throughout its 65-year history, peaking when objections to a 1990 show of Robert Mapplethorpe photographs evolved into a courtroom spectacle. Hamilton County prosecuted the center and its then director, Dennis Barrie, on charges of "pandering obscenity." Both were acquitted.

One of the first showcases for contemporary art in the nation, the CAC is dedicated to showing the newest, latest and - some suggest - most confounding works of art by 21st-century artists. This is not new ground for Shearer, who has worked with contemporary art all her life. With her generous nature, flexible psyche and approachability, one suspects Shearer could bring patrons along willingly on the wildest of rides.

"When I was (director) at Williams (the college's art museum in Williamstown, Mass.), the undergraduates worked as docents," she says. "They were wonderful. ... The girls would have black fingernails and the boys would be in skirts. People would say, 'How can you have them represent the museum.' But that's what we were, a college museum."

Shearer's been on the job in Cincinnati for a week, although her belongings, including her personal collection of art - an Eva Hesse drawing, Tom Otterness plaster relief, Cindy Sherman photo, Tibetan thanka, three Joseph Beuys prints and her photographic portrait by Mapplethorpe - are still in Williamstown.

Fittingly, Shearer's new home, which she will share with her son, is a condominium that was previously the home of the late Harriet Frank Rauh, one of the founders of the Modern Art Society, precursor to the CAC.

"Everything about this move seems right," she says, looking up at the CAC's box tower while seated at an outdoor table across Sixth Street at the restaurant Bella. "It reminds me of my first real job in 1969 at the Guggenheim (in New York). I had this feeling of exhilaration when I walked in. You can get that from architecture."

It's that combination of vision and joy that made Shearer the ideal candidate for the CAC job, according to Joe Hale, the center's chairman of the board. "She has a very strong curatorial vision (and) she is warm and engaging," Hale says. "She approaches the job with a sense of adventure."

In her Carol Channing-like voice, Shearer refers to London-based architect Zaha Hadid's prize-winning building design as a "major piece of art." The building has been criticized about its suitability for showing art, but Shearer sees compatibility in the building and its contemporary art contents.

"The core audience has really put its all into creating this new building," Shearer maintains. "Much of what will go on inside will be a response to the building. This will provide Cincinnati with stimulation and excitement and provocative exhibitions that cover historical background, then bring things up-to-date. There is a certain responsibility to provide background in combination and balance with new art."

Life with the Whitneys

Shearer's first step into the art world came early. Her father, a former polo player from England, trained horses for Cornelius Vanderbilt Whitney, living with his wife and five children on the Whitney estate.

"Flora Whitney Miller (Whitney's sister) also lived on the estate," says Shearer. "It was their mother, Gertrude Vanderbilt Whitney, who founded New York's Whitney Museum of American Art. Flora really took up a torch for the museum. It was largely due to her influence that I had my first exposure to art," Shearer says.

Listening to Shearer tell her story, it is easy to see the teenage girl who went to work at New York's Museum of Modern Art and who was so moved by working "in a place where art and people came together" that she learned the museum's entire collection by refilling the postcard stands in the gift shop.

"I was 17 that summer," she remembers. "I fell in love with museum work and with the dynamic of people interacting with art."

You can see the girl - the same short, straight blond hair, the same earnest concentration, the enthusiasm - in the adult, who is fast to flash a smile accompanied by a devilish twinkle in her light green eyes.

Shearer is anything but pretentious. Where some directors hide behind their Armani suits or too-cool-for-school armor of expensive haircuts and all-black ensembles, Shearer is a breath of fresh air in a cherry-red linen blouse fluttering over an ecru T-shirt and black slacks.

She's real in a way that's rare in the rarified circles of the art world.

First, a stab at theater

Theater came before art, Shearer says. Her older brother, five-time Obie Award-winner Ivor David Balding, was an off-Broadway producer in the '60s and brought home actors who talked up the world of theater to the teenage Shearer.

Balding became the executive producer of the Big Apple Circus in the early 1980s, then left to start his own one-ring European-style circus named after the elephant he had rescued after its mother was killed by poachers. But despite her early exposure to show biz, Shearer did not follow in her brother's footsteps.

After her theatrical epiphany onstage with Clayburgh, Shearer circled back to the other passion that defined her childhood. She began taking art courses. One took students on tours of artists' studios.

"That was a real turning point," Shearer says. "It was inspiring. I realized ... even if they were famous, they were just like you and me. That contact was enormously exciting and provided real insight into the artists' process."

Still a student in 1966, she married Hartley Shearer, a video artist and volunteer counselor for at-risk kids. "It was love at first sight," she says. After a stint in India with the Peace Corps ("It was the '60s") and a return to working at the MoMA gift shop, a chance meeting with a former professor propelled Shearer into a curator's assistant job at the Guggenheim Museum.

"Even as a young assistant she was extremely competent," says former Guggenheim curator Diane Waldman, who became Shearer's mentor.

"She helped me with everything from loans to catalogs to working with the artists and collectors directly. Her success came from her personality. I found her very energetic and enthusiastic about art."

Waldman was working on a new talent series, so the two women made the rounds of artists' studios. "I really developed an interest in artists who were not well-known and who were either young or on-the-edge," Shearer says. "That became the focus of my work."

Her first show under Waldman's tutelage was for Minimalist painter and sculptor Eva Hesse in 1972. "An amazing experience," she says of the show, which was the first memorial exhibition and retrospective of Hesse's work after her 1970 death.

"It was a measure for me on how you could make an exhibition, how it's installed and how the works relate to each other."

After 11 "fabulous" years at the Guggenheim, she moved on in 1980 to become director of the experimental Artists Space.

"It was a time when art itself was changing," Shearer says. "I loved working with artists at the beginning of their careers or artists that were not established yet. That's the closest parallel to the CAC, as a noncollecting institution."

At the CAC, Shearer sees her role as a teacher and overseer working closely with curators and staff to capitalize on the momentum generated by the building.

"It is the best we could have hoped for," says former CAC acting director Andree Bober. "She balances administrative (and) curatorial experience. ... I think she is the type of person who can bring together all the great resources the CAC has, and bring it to its highest potential."

From Artists Space, Shearer returned to MoMA in 1985 to run its interdisciplinary PROJECTS series. Four years later she would move to Williams.

"We had lived in New York for 20 years," she says. "It's a tough place but a great place, but we were ready for a change. As much as I loved the Modern (MoMA), I missed what I had at Artists Space - being in charge and having a more agile organization. I wanted to be involved in the teaching of art and the learning of art. I really wanted to go to a college museum."

In her 15 years at Williams, she directed the development of critically acclaimed multimedia exhibitions, many of which traveled to other institutions.

"It was a rough couple of years," she says. "The town really rallied. I spent the happiest days of my life at Williams, and the saddest. After my husband died, I knew I had to stabilize. The CAC came along and it made enormous sense."

While talking, Shearer has made her way to the top floor of the CAC building. She's been sharing her vision for the future as she walked through five floors of galleries.

"People need just the smallest amount of encouragement and information to unlock the key to a work of art," Shearer says. "Art plays a thousand roles in our lives: It can be a catalyst for social change, spiritual, conceptual or truly physical. Art affects our heads and our hearts. When those chords are struck, you have changed another human being.

"That's what's so exciting about art today - there are so many ways of making ... (and) interpreting art. You don't want to dumb down an exhibition by overexplaining it. It's the experience that is at the heart of it."

An exhibition by students from an Uptown Arts summer school program catches Shearer's eye. As she strolls over to a collection of architectural plans for dream houses the kids have made, she greets workers and colleagues as they pass.

She looks closely at the work, especially delighted by a home designed by a 10-year-old who has included an amusement park, butler's quarters, VIP club and star-gazing room.

"Kids really get architecture," she says, winding her way back to the subject of the CAC's building.

"One of the things I found exciting here was the space. And there's so much excitement and enthusiasm on the part of the city leaders. I was really knocked over by the support for the arts in this community."

Shearer can't help but break out in a big smile.

This story has been posted in the following forums: : Headlines; COS - India; Art; Museums

Hello- This message is to say hello to Linda Shearer if she remembers me from her contemporary art and film class at Williams College in 1994. I will never forget the wonderful learning experience and unforgettable nature of Linda and Hartley's enthusiasm for art. I am currently an artist and teacher in Colorado and would love to hear from Linda. 9970)819-0372 Thank you!!!!

She got fired as quickly as she showed up. LOL