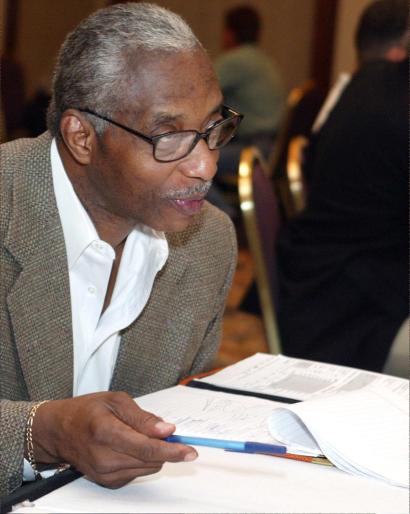 By BILL HENDRICK
The Atlanta Journal-Constitution
Published on: 07/28/04

Halliburton Co., which has a $4.5 billion contract with the Pentagon for work in Iraq, said Tuesday that Atlanta proved its best city for recruiting workers, with the company snapping up 112 "high-quality" employees after a recent two-day job fair downtown.

Among those hired is Ken Cobb, a 59-year-old unemployed former professor with a master's degree in business administration. Cobb, who holds a graduate degree in banking from Rutgers University in New Jersey and an MBA from Northern Illinois University, will get $80,000 a year to refuel jets.

"I've been out of work a long time because your age just knocks you out of consideration. But not with KBR and Halliburton," he said. "I've applied for a million jobs, but I'm too qualified for most, and those I'm qualified for don't want people my age."

Economists said they weren't surprised that so many highly qualified middle-agers were recruited here.

"Manufacturing is dominated by middle-age people, and that's what's been hit hardest in the Atlanta area," said Jeff Humphries, director of the Selig Center for Economic Growth at the University of Georgia. "Compared to other major metro areas, we lost an awful lot of jobs. And people in Atlanta may be willing to take more risks because many are recent to the area and don't have roots."

Rajeev Dhawan, director of the Economic Forecasting Center at Georgia State University, said, "When you are 45 or above it's very hard to get a job. KBR knows there's a very dedicated labor pool here of people who are having trouble finding work. The recession is over, but it's not going to get much better as far as hiring goes. In fact, a lot of companies are still in a cost-cutting mode."

"It's very favorable for us, and we'll be back, probably in September," he said.

Cobb was hired on the spot at the Atlanta job fair. On Tuesday, he said he is "excited" and getting his financial affairs in order, notifying family and friends, making a will and ensuring that his 82-year-old mother will be well cared for. Cobb, who lost all his savings when a business venture failed a few years ago, said he hopes to work in Iraq for four years or more. He hopes to move up the job ladder while he's in Iraq, which Ward said is possible.

Cobb, who is divorced, said his adult daughters, Kerri Cobb, a teacher in Houston, and Stephanie Williams, a Maryland attorney, have mixed feelings about what he sees as "a great adventure."

"Kerri's adventurous, like me. She's all excited. Stephanie, she said, 'Daddy, you know they cut heads off over there.' But I'm not worried. I'll be on a military base."

He said he isn't concerned about being taken as a hostage or working in a combat zone. At least 42 Americans have died while working for KBR in Iraq. Among them is Georgia native James Gregory Wingate, 36, of Monticello, who died June 5 when a mine exploded under his truck.

Ward said candidates are told bluntly at the job fairs and in post-hire training sessions in Houston about the dangers, and some drop out. In Atlanta, 12 originally hired changed their minds within a few days.

Once he's in Iraq, Cobb doesn't plan to take much time off, although KBR offers paid furloughs. Workers who don't spend at least 330 days of their first year in Iraq lose a tax exemption available on the first $80,000 of income.

Cobb is shopping for steel-toed boots and long-sleeved, light cotton shirts and trousers. He will be issued a Kevlar helmet and shrapnel vest in Houston as he boards the plane headed to Iraq.

"These jobs aren't for everyone," Cobb said. "But mine's for me. I'm excited. I can't wait to leave."

He said he had no qualms about signing the required "cremation" waiver, which KBR demands in case workers are killed by chemical, biological or nuclear weapons or diseases that could be transmitted by a corpse.

His only fear is one he can avoid: "I do not plan on riding or getting close to any camels."

This story has been posted in the following forums: : Headlines; COS - Liberia; Iraq