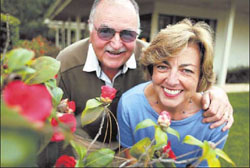 "Death? It isn’t really something I’m thinking much about."

Dave Musante isn’t thrilled with this topic. He’s a big guy, a bit sweaty from yard work, and when he gives you a grumpy stare it’s not pleasant.

This isn’t his usual tone. The Fullerton, Calif., retiree is chatty, eager to swap ideas about everything from politics to milking a cow. He was a longtime mayor of a mediumsized town in Massachusetts. He’s run for office many times, and won more than he’s lost. He’s had adult beverages with people you’ve heard of. He’s got stories.

But he is 72. A year back, he had an artery unclogged. And, while he feels good these days, he’s also a practical sort. Musante — ex-mayor, exbaseball umpire, ex-business consultant, a guy who can’t 100 percent rule out being ambassador to Kyrgyzstan — admits to being at one of those awkward stages of life.

He can study until he drops in the classes he loves at California State-Fullerton. He can organize an ushering program for the school’s vaunted baseball team, another passion. But Musante can’t prevent death from being a pain in his rear.

"You do shorter-range planning at my age," he says. "That’s the difference."
And writing his own obituary? Has he planned for that?

"OK, I’ll do it," he says, finally, after gentle prodding.

"Known as Northampton’s ‘Walking Mayor,’ for his daily two-mile strides around the city . . . he is generally credited for the renaissance of the city’s historic downtown."

That’s the truth. Musante was asked to participate in a story about writing your own obituary.

See, the trend of people self- penning their obits is valid enough. A lot of people have done it, and many more figure to do so in the future.

And, on its own, the rise of self-written obits is a fairly interesting commentary about our culture.

Maybe we’re finally comfortable with death. Maybe we don’t trust reporters or funeral directors to summarize our life tales. Maybe we’re just too darn special, each and every one of us, and we all deserve a full-blown obituary with tears and laughter and possibly (if written online) a harp soundtrack.

Or, cynically, maybe we don’t care if our last public statement is fact, fiction or some mixture of the two.

But none of it is as interesting as the trenches. When one sits at a laptop to tap out the message about yourself that will, in fact, be the last, last word, what goes through your mind?

"Still attracted to opportunities for service, Musante and his wife, Janet McNeill, joined the first group of U.S. Peace Corps volunteers to serve in Russia."

It’s been a week, and Musante has completed his obituary assignment.

It’s on the long side for a publishable obituary, roughly 2 1 /2 typewritten pages. But Musante was a politician, so he gets some slack. It’s dry in spots; clearly no bologna about the political career or the other careers as a state trooper and a 1960s-era computer guy, among other things.

There are parents and children (six) and wives (two).

The word "service " is huge. There is humor (a swimming facility he helped get built while mayor is known as "Musante Beach"), and a no-holds barred wince or two ("I was hurt when I lost my first campaign for mayor in 1969 . . .")

There is even a plug for Sen. John Kerry for president. All in Musante’s obit written by Musante.

So was it worth it?

He switches gears, telling, instead, about a self-obituary program he wanted to start in Northampton, which never got off the ground.

"I wanted to have a place at the library where, for a fee, any resident could come in and write a couple pages and have it bound and stored in the library. It would be something the ordinary citizen would have, in writing, to prove they were here and to be remembered."

Would he write another obit, perhaps at some time closer to actually needing it?

"Maybe for the papers around here. I’ve only been here awhile. But back in my hometown, when I die it’ll be front-page news.

"Somebody else will write my obituary."

This story has been posted in the following forums: : Headlines; COS - Russia; Obituaries