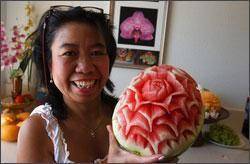 A cut above: Thai culinary art elevates any presentation

Some artists use a canvas and paintbrush. For Jankaew Loring of Escondido, a watermelon and meat cleaver will do the job. Loring teaches the Thai art of fruit and vegetable carving, which she learned herself two years ago at the Thai temple in Escondido. She will be teaching others in a class offered Aug. 19 by the city of Escondido (see box).

Carving fruits and vegetables is a prerequisite for any working cook in her home country, Loring said.

"If they are not carving, they do not have a job," she said.

Thai culture prides itself on presentation of foods. Often, large fruits such as melons, gourds or pineapples become serving platters for salads, fruits or cooked dishes. And the table will be set with floral arrangements that, on closer inspection, reveal themselves to be turnips, carrots, radishes or other produce.

Loring can turn a turnip into a flower in about 20 minutes and etch a delicate pattern into a radish in even less time.

The detailing is done with short, curved carving knives she buys from Chai Oriental Foods on East Valley Parkway in Escondido, a store that specializes in Asian food and kitchen items.

Not just any food can be carved into art, Loring said. An apple will discolor too quickly after being cut, and a banana is just too soft.

To carve a watermelon as an example, Loring begins with a cleaver to cut away the rind. Next she pulls out a carving knife and cuts a circle into the top.

A common mistake is to cut too deep or at an angle, and she often has students learn using smaller knives to avoid problems, she said.

With the first circle cut into the top, Loring precisely slices away slivers, working her way down the watermelon, and flower petals began to emerge.

"The Thais have a real reverence for food," said Loring's husband, Dave, looking on.

The couple met when Dave served in Thailand as a Peace Corps soil and water conservation agent from 1984 to 1987. With Dave unable to eat the hot, spicy food the others at the camp consumed, a co-worker took pity and hired his sister as a cook. Dave fell in love with more than the woman's cooking, and the two married and moved to Escondido.

Dave explained that ornamental fruit-carving began as a way of adorning food for the king, but now is so prevalent in the culture that almost all hotels have at least one fruit-carver on staff.

Korea, Japan and China also employ fruit and vegetable carving to heighten a table presentation, but the skill is most often associated with Thailand, where it has evolved into a culinary art.

According to Internet sources on Thai culture, the tradition dates to 1364. Thao Sichulalak, also known as Lady Nang Nopphamat, decorated a floating lamp (known as a krathong) with fruits and vegetables carved into flowers, birds, rabbits and other animals.

The floating lamps are used in ceremonies held each November on a full-moon night in villages near rivers and waterways. The lamps are placed in the water as an offering to bring good luck.

Lady Nang Nopphamat was the principal consort of King Phra Ruang. After the king saw her work, he decreed that fruit and vegetable carving would be an art heritage of Thailand. The country has held annual carving competitions since then. Loring said royal palaces in Thailand were like universities, and young women would compete for entry with their carvings.

While women still make up the bulk of the classes she teaches, Loring said each class attracts at least one man, whom she thinks sometimes are better students.

This story has been posted in the following forums: : Headlines; COS - Thailand; Cooking; Fruit Carving