It came out that Thorste had been a member of the Peace Corps, in Nepal. He had thoroughly enjoyed that experience. While in Nepal he had come to embrace the Buddhist religion. 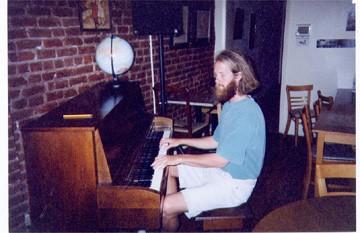 It came out that Thorste had been a member of the Peace Corps, in Nepal. He had thoroughly enjoyed that experience. While in Nepal he had come to embrace the Buddhist religion.

Thorste, the man of mystery

Years and years ago, a small brotherhood of free spirited musicians and entertainers walked through the countryside, carrying a lute or juggling equipment, ready to put on a show for the citizens of the village they happened to be passing through. We see the modem descendants of those entertainers still today. They stop in McCook for the Live At The Bieroc series. Still free spirited, but instead of lutes and walking, they carry guitars and travel in station wagons. But, believe it. That former type still exists.

Late on Friday afternoon of the 2004 Buffalo Commons Storytelling Festival, a fellow wandered into our bakery in McCook. While waiting for a free clerk he cast a glance into the adjoining Bieroc Cafe, saw the piano, and without saying anything to anyone, sat down and began to play. He played beautifully -- easy listening songs, in a manner that would be received favorably in the lounge of a fancy hotel. Bakery patrons and clerks, alike, were drawn to see who was playing such wonderful music. He played in a strange, stiffly upright position, eyes closed, as if he were receiving a signal from afar. When he stopped, the small group of listeners gave him a long round of applause.

By that time my son. Matt, and I had arrived and we engaged the fellow in conversation. He certainly had an interesting tale to relate. He said his name was Thorste (just one name). He lived in Portland, Oregon, but had been in St. Louis to visit his brother. When his visit was over he decided to make his way back home -- by walking.

He had been on the road for several weeks, and had no definite time for arriving home.

His hair was long and blond, and he had a beard, but did not look especially scruffy. He was quiet, but smiled easily, and when he smiled he conveyed a great feeling of calm friendliness. He carried quite a large plastic water bag, and a small back-pack -- that was all. He said that before he started out he made two lists; one for the things he'd like to have, the second, the things he had to have. He threw away the first list and packed the second--and it was minimal--a toothbrush, a bar of soap, a towel, a hat for the sun, one change of clothing. His sleeping bag was made of some space age material, so small that it packed into a bundle smaller than a loaf of bread. No tent.

He slept in parks, or barns, or abandoned buildings. He kept a bit of money for food, and emergencies, and enough for a train ticket, in case his walk ceased to be fun.

Though he liked walking he said he was not a fanatic about it, and would accept a ride from time to time. For instance, one couple had picked him up in Missouri and taken him on his way for several miles, to where they turned off for their farm home. They soon returned with a proposition. They said they were leaving for a few days and wondered if he would be willing to stay in their house, water the lawn, feed the dog, and generally look after things. He had no special agenda, so stayed the three days until they returned.

He said that he was able to do his laundry, and do a little housecleaning while he rested.

Matt had an extra ticket for the Friday night show at the Fox, and asked if Thorste would like to stay over, attend the show, stay in Matt's camper for the night, and play the piano over lunchtime at the Bieroc on Saturday. He was very agreeable to everything.

He seemed most willing to answer questions, but volunteered little or no information about himself, his family, his background, or his future plans.

Saturday noon Thorste played his "supper-club" type music, alternating with other entertainment at the Bieroc, much to the delight of the diners. He played a broad spectrum of musical numbers, light classics, show tunes, and pop favorites, and played them with different, interesting arrangements. Someone asked him how he knew which

song to play next, since he had no play list written down. He smiled and said that he just played until it seemed right to stop, and the next song just appeared in his mind's eye.

When somebody in the audience called out a request Thorste just sat for a long moment with his eyes closed, then began to play the requested tune -- perfectly. When he finished playing a number, people would clap enthusiastically. Then Thorste would turn slightly on the bench, give a little smile and a nod of his head in acknowledgement. He almost seemed to be surprised that there were other people in the room.

By and by the time came for Thorste to have his own lunch. Then it came out that he had been a member of the Peace Corps, in Nepal. He had thoroughly enjoyed that experience. While in Nepal he had come to embrace the Buddhist religion. Before he began his vegetarian meal at the Bieroc he bowed his head, and with closed eyes, and with arms outstretched, thumbs touching middle fingers, he offered up a silent prayer that lasted for a full minute.

Thorste had participated in the dance lessons Saturday morning, and took in all the activities at Norris Park in the afternoon. Afterwards, he volunteered to help with the bakery catering at Memorial Auditorium in the evening. When his catering duties were finished we urged him to bring over his food and join us at our table, but he would not eat until everyone had been through the food line.

When the dancing began it was easy to see that he felt the beat of the music.

Though several young ladies invited him to dance, he declined. Halfway through the evening Thorste made his way to the dance-floor. He did not dance with anyone else, but using dance moves like nobody else had that night, he seemed to go into a kind of trance (like when he played the piano), and moved around the fringes of the dance floor, in his own little world-- a man of mystery to everyone in the auditorium. Later, for a small group, he performed a seemingly impossible card trick--befitting a man of mystery.

Somehow it came to the attention of a couple attending the celebration that Thorste's route headed through Fort Collins, Colo., where he planned to visit a friend.

Before the evening was out, these people, who lived in Fort Collins, invited him to join them in their van for the trip to Colorado. And so, Sunday morning Thorste left McCook, having made a number of friends, but no less a mystery than the fellow who had arrived Friday evening. The family from Fort Collins very much enjoyed his company on the ride to Colorado, especially the children, and by the time they delivered Thorste to his destination, they felt as if they had made a good friend.

Thorste is home in Portland now. We wonder if he'll ever pass this way again.

We hope so. We liked him and very much appreciated his talent. The family from Fort Collins has heard from him. He shared the information that he plans to pursue an advanced degree in psychology in the fall. Matt, too, had a post card from him, thanking him for the fun weekend he had in McCook. He said that he had been undecided whether he should accept the ride to Fort Collins, but something had compelled him to do so, and he was happy that he did. The friend, whom he wanted to see, was leaving on a trip the next day, and had he made the walk to Fort Collins he would have missed seeing his friend all together.

During the weekend someone remarked that Thorste, with his smile, his kindness, his good health, and free spirit, danced to the beat of "different drummer."

That seems to be true, and it also seems that his "different drummer" takes good care of Thorste.

This story has been posted in the following forums: : Headlines; COS - Nepal; Buddhism; Music