Judy Henry moved from New York City to Rowe, New Mexico in 1970 on the advice of her friend, Helen Thompson, with whom she had been in the Peace Corps in Ecuador 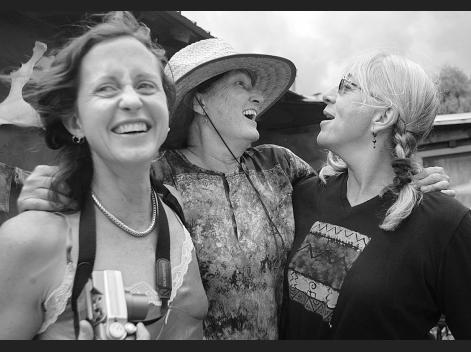 Judy Henry moved from New York City to Rowe, New Mexico in 1970 on the advice of her friend, Helen Thompson, with whom she had been in the Peace Corps in Ecuador

Caption: Judy Henry sings with friends Kate Moses, right, of Santa Fe, and Bee Zollo, left, of Eldorado on Saturday at a hippie reunion at Henry’s home in Rowe. The event marked the 34th anniversary of the arrival of hippies in the community southeast of Santa Fe. - y

Judy Henry moved from New York City to Rowe, New Mexico in 1970 on the advice of her friend, Helen Thompson, with whom she had been in the Peace Corps.

“She said, ‘Come to Rowe. It’s just like Ecuador but there is running water in the house,’ ” Henry remembered.

So she came, driving a mail truck across the country with her then husband, getting hassled by the cops in every state along the way. She was 25 years old.

“They called us hippies, but I never called myself a hippie,” Henry said. “We were just trying to get away from a crazy world. I was sick of what was going on. Like I am now, but I’m older now.”

She’s since learned to embrace the term.

Saturday — on her 60th birthday — she threw a party. The flier said: “celebrating 34 years of hippies in Rowe.”

It had all the markings of a hippie celebration.

Peace, love and hot tubbing with your friends? Check.

Many of the women wore their “hippie costumes:” denim cutoffs, braids, flowers in their hair.

“I saved this body since 1976 and I’m still wearing it,” joked another. “My breasts too, nothing added, nothing taken away.”

The guests lived up to their reputations as wild and crazy hippies by performing an elaborate entrada in a sunflower-filled meadow. It told the story of each person in the core group of about 20 hippies that settled in Rowe in the ’70s.

The stories were of candle making, adobe making and Volkswagon buses getting stuck in the mud.

Joe Breza, 52, a painter who came to Rowe in 1974 but now lives in Santa Fe, talked about trying to interface with the local culture.

“The hippies were met with resistance at first, but then embraced, Breza said. “A lot of people saw you just wanted to live in peace.”

Breza said one day he was painting a field of sunflowers when a local man yelled at him across the clearing.

There was talk of organic gardening, natural childbirth and breast feeding.

People talked about the “force” that pulled them to Rowe, and how it became their “spirit” home.

It could have been the 70’s. But the cars where much newer. And the beautiful young daughters who had been born in teepees now had French manicures. And the cake was made from sugar and white flour.

It also could have been any other family reunion.

So what is different about the hippies? What does it mean to be a hippie? It depends on who you ask:

“I think in order to really have been a hippie it was about peace, love and psychedelic substances,” said Kate Cook, a Santa Fe teacher and psychotherapist who said she was a “satellite Rowian” back in the day.

“Back then it was about being anti-establishment,” said Columbine Rivera.

“We wanted to change things, we didn’t like the war, the electoral process, the government. We thought we could change things by always looking for peaceful solutions.”

Since then Rivera said she’s learned that changing the world starts with changing yourself and living with integrity.

She’s proud that she raised her daughters on healthy food.

Henry’s daughter Amanda Perez, 25, said growing up with the extended family of the hippies made her a happy person.

“It’s given me a wonderful foundation to go out into the world and be an expressive person,” she said.

“People may think I’m crazy, but I know I have this backbone of people saying, ‘no, you aren’t crazy.’ ”

But she does get bugged by the stereotype people have of hippies and of the way hippie culture has been co-opted.

“It was hard when I moved to Boston. There was a whole hippie fad and it was all based on what you where wearing,” she said. “I used to get really aggravated because I knew being a hippie was about living on the land and living simply, not jumping out of your Range Rover with your handmade clothes and your patchouli.”

Henry is a Hospice nurse. She lives part time in Santa Fe, but still cooks on her wood stove when in Rowe. She doesn’t have any regrets about being a New Mexico hippie.

“If I was the same age now as I was then, I would do the same thing,” she said. “ I would drop out. Take myself away from the mainstream. I don’t like it. I don’t approve of it. I don’t want to be part of a war machine.”

“I would love to have a shirt that says “I’m tired of being an outlaw,” she said. “I wish I wasn’t out of the mainstream. I wish my thoughts and my beliefs where in the mainstream.”

This story has been posted in the following forums: : Headlines; COS - Ecuador; Hippies