With his third Allen Choice novel, Jamaica RPCV Leonard Chang has established himself as one of a cadre of Asian American writers who march to a different drummer in a publishing world that, for the most part, still hankers for "the next Amy Tan." 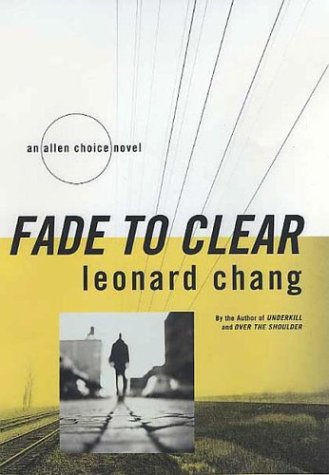 With his third Allen Choice novel, Jamaica RPCV Leonard Chang has established himself as one of a cadre of Asian American writers who march to a different drummer in a publishing world that, for the most part, still hankers for "the next Amy Tan."

When he's not dodging bullets or fending off low-lifes in a dark alley, Private Eye Allen Choice -- a.k.a. the Block -- loves to read Kierkegaard, sip lattes and run 5 miles a day in the Berkeley hills.

Unless he's brooding about his girlfriend's parents:

"The Block doesn't work well under pressure, and can already imagine himself screwing up. He will say the wrong thing or underwhelm them in some way. And he will be overtly self-conscious of his lack of ethnic ties. He can't speak Korean, and knows very little about Korean culture. Serena says he is a gyupo, an Americanized Korean. Serena, however, speaks the language and actually studied in Seoul for two summers, and this mere fact puts Allen at a disadvantage with her parents. He is starting in negative territory. He is an ethnic dunce."

Choice, the philosopher/PI protagonist of Leonard Chang's mystery series, is at it again in the Oakland writer's latest mystery, "Fade to Clear." With his third Allen Choice novel, Chang has established himself as one of a cadre of Asian American writers who march to a different drummer in a publishing world that, for the most part, still hankers for "the next Amy Tan."

"Leonard's such a talent and he's doing something very new," said Sally Kim, an editor at Crown Publishing Group's Shaye Areheart Books, who worked with Chang at St. Martin's Minotaur. "He's creating a space for Asian Americans in genre fiction. It's a slow growth, but these authors are widening the market."

Chang has already drawn praise from mystery titan Michael Connelly, who says Chang "works like a painter" to render his protagonist.

Fans might already know that Choice is an Americanized version of Choi, a common Korean name. Chang got the idea from a guy he met in Seoul 15 years ago who had Americanized his name to Choice.

"I thought that was really fascinating," Chang says. "When I wanted to come up with a Korean character who was very Americanized, I remembered the name and thought, how emblematic!"

Chang, a New York transplant, via Dartmouth, Harvard and a Peace Corps stint in Jamaica, lives near Lake Merritt with his girlfriend. One steamy afternoon, he was cooling off under a patio umbrella at the Café Di Bartolo on Grand Avenue.

"I have no idea if that guy I met in Korea ever read any of my books," Chang says, laughing.

He has a striking face, long and elegant, with high cheekbones and dark, shoulder-length hair. Unlike the hulking Block, Chang is compact and lean.

At 35, he has published five books, not bad for a philosophy major whose immigrant parents worried about his survival as a writer.

Chang's first novels, "The Fruit 'N' Food" and "Dispatches From the Cold, " published in 1996 and 1998, were about race and ethnic conflicts. The first Choice mystery, "Over the Shoulder" debuted in 2001 and its sequel, "Underkill, " followed last year.

Though still under the radar screen of some hard-core mystery fans, Chang appeals to others as a genre-shifting writer whose novels aren't just about crime, sex and violence. Choice, a philosopher trapped in a PI's body, is a neurotic anti-hero who contemplates race, family, relationships and life, all with a noir sensibility:

"Perhaps in the future the Block will point to this particular moment in time as the Recognition. He knows the ephemeral nature of relationships, the quickness with which lovers can split up; he knows the bonds of family are illusory, that just because you are related to someone doesn't mean you are really connected."

So Americanized he feels alienated from his Korean roots, he's nevertheless confronted by race all the time.

Like the time he's trapped in a warehouse and held at gunpoint by a thug who takes to calling him "Chin."

"What the hell you say?" the thug responds.

Or when he shows up to case a party in Los Altos Hills and hesitates when he realizes that "everyone at the party is white. I wonder if I'll be noticed."

Not that Chang intended to create an Asian American character.

"But how many mysteries have an Asian American protagonist?" Chang asks. "Not many. Maybe the racist portrayal of Charlie Chan. So why not? What better way to normalize the Asian American male than to have him deal with everyday life?"

It took a while for publishers to catch on.

"A lot of them had trouble characterizing it," he recalls. "They'd ask, 'Why didn't I play up the ethnic angle more?' So it was tough at first. It helped that it was a mystery. But we had to fight not having an Asian motif on the cover, to exoticize it."

It isn't just publishers who have trouble with the concept, according to Lee, who lives in Cambridge, Mass., and is the longtime editor of the literary journal Ploughshares.

"When I was on tour for my first book, 'Yellow,' there were reporters who seemed amazed that Asian Americans could be regular people," he recalls.

"Yellow," a story collection of eclectic characters that was honored by the American Academy of Arts and Letters, was the first release of a two-book deal with W.W. Norton & Company. The second was "Country of Origin," his first novel.

Despite being an editor for 16 years, Lee found writing a novel arduous, especially since its concept, he now says, was "born out of stupidity."

The son of a career State Department officer, Lee, 44, spent the majority of his childhood in Tokyo and Seoul. Like many embassy kids, he went to the American School in Japan. He left for America at 18. But the world of FSOs -- foreign service officers -- ex-pats and spooks stayed with him.

When he began brainstorming for a novel, he recalls, "I said, I know this world -- I won't have to do much research.''

Lee ate his words. For two years, he buried himself in research, studying dozens of books and writings by numerous Japan experts such as celebrated journalist Ian Buruma, a specialist on Asia, and was inspired by Anne Allison's "Nightwork" and "Permitted and Prohibited Desires" and Lisa Louis' "Butterflies of the Night." The result: a dark thriller about an American woman, half African American and half Asian, who comes to Tokyo in search of her roots and goes missing. There's also a shallow, career-driven, half-Korean FSO assigned to find her, a neurotic Japanese cop in charge of the investigation and a motley crew of denizens of Tokyo's sex industry and hostess clubs.

At lunch following a recent reading at Stacey's bookstore in San Francisco, Lee said he hoped no one mistakes the novel for the real Japan.

"I didn't intend for it to be a comprehensive view of Japan," he says. "I just created the context for my characters to live in. Sort of like 'West Wing. ' "

But he's acutely aware of the danger.

Recalling a conversation with a Japanese distributor about his novel, Lee says he was told, "I hope it's not like 'Lost in Translation.' "

Sofia Coppola's film about two alienated Americans in Tokyo has been criticized for its ham-handed humor at the expense of the Japanese in an otherwise remarkably subtle work. "I can understand the Japanese's objections to it in the same way I fear a backlash to my book," Lee says.

He's aware as well that his ethnicity -- he's a third-generation Korean American -- might be viewed in a political way, given the discrimination that still exists in Japan against Koreans.

Lee disputes any such motive.

"I loved my time there," says Lee, who said the only prejudice he experienced in Japan was as a gaijin (foreigner) American. "So I hope people see it as a novel and not a political indictment."

In fact, Lee, like the rest of the world in this era of trendy "Japan Cool," greatly admires the Japanese.

"In some way, I felt weirdly conflicted -- I wanted to be as Japanese as I was Korean," he recalls. "I thought they were pretty cool and fascinating. I imagine that would be sacrilegious for a Korean to hear that from me."

This conflicted identity was made even more complex by being a TCK -- Third Culture Kid, as many military brats call themselves -- who have to negotiate not just the Army culture, but those of America and their foreign host country.

"So I've always viewed myself as an outsider," Lee says. "For me, that worked."

"One came up to me after a reading and asked me, 'Do I have to write about Asian Americans?'