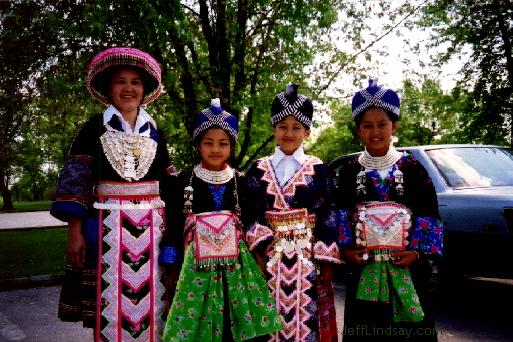 As they leave behind dead-end poverty and squalor, she only wants to stay.

However unlikely the place, dreams are coming true for both — U.S.-bound Hmong refugees departing Thailand and the St. Paul-raised, college-educated daughter of former refugees helping them.

She previews their new life — doctor's offices, flush toilets, schoolhouses and Uncle Sam. They embody the history she hopes to absorb. She is the future they seek. They are the past May yer Ly needs.

That's because she has no memory of the experience that defined their lives and hers — the war that caused her family and thousands of others to flee communist insurgents in Laos. Her family was one of the first to get out as the country fell to communists in 1975.

Born in California, she moved here with her family when she was 2. She did not ride out jungle firefights on a parent's back. She did not see others die crossing the Mekong. She did not spend years running a foot-powered sewing machine in a dusty sweltering refugee camp, like many women she now meets as a cultural orientation trainer.

For that, May yer Ly, 27, feels fortunate and obligated. To get an education, to help her people, to learn the past she missed out on, to weave that together with what she is witnessing of what probably is the last great wave of Hmong resettlement to this country. Of the 15,000 Hmong expected to arrive, an estimated 5,000 will join relatives in the St. Paul area.

"It's amazing to feel like you're part of this personal journey as well as this moment that's going on in Hmong history," May yer Ly said from Thailand. "I always have to remind myself this is such a unique opportunity that I have, to remember every little thing that happens here for history's sake."

In a few days, May yer Ly will have been in Thailand for a year. She graduated from the University of Minnesota in 2000 with a degree in American studies and worked at the U's Asian Pacific American Learning Resources Center until July 2003, when she left to enter the Peace Corps.

Before she joined the Peace Corps, she had never heard of the camp where she now works for the International Organization for Migration, which handles resettlement logistics. She had no idea thousands of refugees were squatting on the grounds of Wat Tham Krabok, a Buddhist temple north of Bangkok. She just wanted to get as close to her roots as possible.

"I wanted to come to Southeast Asia to take a journey back to where my family grew up, where they were raised," May yer Ly said. "I wanted to get a glimpse of what my parents may have gone through when they were in refugee camps in Thailand."

It's a feeling shared by other Hmong of the same age who also avoided the horrors of war but feel compelled to learn and retell the history, said KaShia Moua, a close friend of May yer Ly.

"Our parents and grandparents passed on all these experiences and stories based on everything they lived," KaShia Moua said. "If we don't have that to pass down, it's up to us to research, to understand to the best of our ability, to pass it down to the younger generations."

As eager as most refugees appear to be to leave the compound for good, May yer Ly had to make a concerted effort during several months just to set foot inside.

She was in Peace Corps training last October when she visited another volunteer in Lop Buri, just minutes from the camp. A short time later, the bus stopped near the temple, unseen from the road. Three young girls sat down behind her. She soon realized they were speaking Hmong, which she had not heard or spoken since she had gotten to Thailand.

"I had no idea there were Hmong people in central Thailand," May yer Ly said. "They were like, 'There's a lot of us.' "

She agreed to visit sometime and continued on to her work site five hours away. Visiting took on greater urgency in December, when the State Department announced it would resettle every eligible resident of the temple compound. May yer Ly returned to Lop Buri during the last weekend of December but couldn't get in the camp; instead, she spent 45 minutes talking to Hmong on the road outside.

She finally got inside in May, serving as a State Department interpreter for two weeks. She was nearly done with that when IOM offered her a position as one of four cultural orientation trainers.

"I just fell in love with the camp," said May yer Ly, who left the Peace Corps to take the IOM job. "I felt like this is where I belonged. There were so many things that kept pulling me to the wat. … I really felt like it was a calling."

Today, she teaches twice a day, two hours at a time, up to 50 refugees in each class. The curriculum, developed by the IOM, covers major points of American history and stresses self-sufficiency. She also fields questions, most often about how to survive without speaking English.

"It's a wonderful opportunity to connect with them. Being Hmong from America, we are able to give them a side of it that they can culturally relate to," she said.

Since late June, several times a week, a bus pulls away from the camp to take 20 to 30 refugees to the airport.

"It's in the air, even though there are still tons of people here," May yer Ly said. "It's kind of bittersweet. They're leaving, but they're still leaving some family members behind who haven't had their names listed to go."

Seeing how people live at the camp does not get easier.

"The first day I got there, as the van pulled into the wat, it was really emotional," May yer Ly said. "I was starting to tear up, feeling like, 'How have they been able to live like this for so long?' You still feel that emotion every day."

At the start of each class, she has students introduce themselves and asks what their dream is for life in the United States.

"I ask them, if you don't think about the language barrier or financial issues, what is your dream, what do you want to become," she said. "They'll say, 'If I can, I want to be a doctor or a lawyer.' It's awesome to hear that."

For her part, May yer Ly wants to continue her work until the teeming camp is empty. Then she might go back to law school, possibly in California.

"I'll be excited to talk to some of these kids once they've lived in the United States for a few years."
Todd Nelson can be reached at toddnelson@pioneerpress.com or 651-228-5575.

This story has been posted in the following forums: : Headlines; COS - Thailand; Refugees; Asian-American Issues

This is amazing. This story motivates me to wanting to volunteer for Peace Corps after I graduated from college. Thank you very much for sharing this wonderful story!