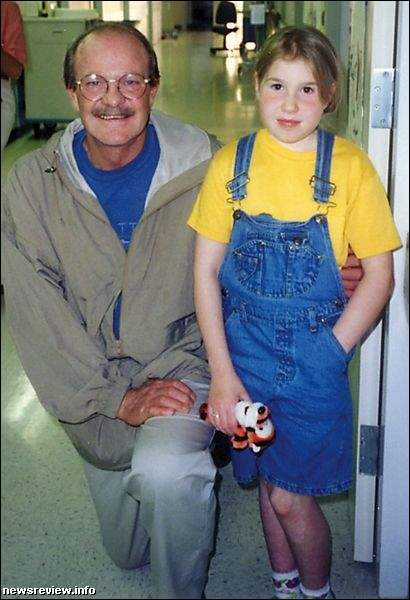 Always the teacher, Bob Heaton did things his way

Caption: Bob Heaton and Dorothy Smith celebrated the fifth anniversary of their bone marrow transplants in this 1996 photograph where they were patients together at the 'Hutch'

Fourteen years ago, my family had nervously taken seats in a small room in the Fred Hutchinson Cancer Research Center in Seattle to watch a video explaining the rigors we were to face with my daughter's bone marrow transplant.

There was a knock on the door and we were asked if we would mind if another family joined us.

Bob and Katie Heaton, along with daughters Laura and Jane, squeezed in with us and we were taken by how much we were alike. Father and mother about the same age as us, with two cute little girls, just like ours.

The families, one from Roseburg and one from Coeur d'Alene, Idaho, spent the next four months together at the "Hutch" before heading home. Leukemia victims Bob, 45, and my daughter Dorothy, just 4, were among the 60 percent who survived the procedure. Fortunately, they were strong enough to weather the devastating radiation and chemotherapy regimen to wipe out all sign of cancer cells. Infused donated bone marrow is supposed to then generate new, cancer-free cells.

Just a few doors apart on the transplant floor, the families saw each other daily, sharing the ups and downs, the tears and sleepless nights, and the occasional loss of a newfound acquaintance. When Dorothy had troubles she couldn't get through to me, I'd wander down the floor and ask Bob to explain. We all looked after each other.

When Bob and Dorothy were allowed to go home, we had a rare bond that's born of weathering challenges together.

The Heatons headed back to Roseburg, which they described as this great little town in Oregon. We returned to Idaho.

Three years later, I was invited to interview for the editor's job of a daily newspaper in of all places, Roseburg. It was an easy move with the Heatons scouting out houses in advance and arranging a welcoming party of teenagers to unload the moving truck. We lived walking distance apart.

We learned that bodies react in differing ways to bone marrow transplants. While Dorothy suffered some aftereffects of chemo and radiation, she experienced little rejection syndrome. Bob wasn't so lucky.

The procedure gave him extra years with his family and allowed him to continue the teaching he loved, but he was never free from drug therapy. As that took a toll on his organs, Bob's once-vital energy drained and he gradually had to withdraw from active life.

But no matter the prognosis, Bob appreciated the time he had been given. Even following setbacks, Bob's attitude was enviable.

"I woke up breathing this morning," he laughed one day, dismissing his ailments, after I asked him how he was doing. Despite his troubles, he was glad to be alive.

This past Monday morning, Bob took his last, peaceful breath, in the company of his cherished family, in his home on Main Street. While his garden that had been his therapy all these years had faded, it still gave him comfort in his final days.

Bob's death probably came a little sooner than it could have, but understandably, he had his fill of hospitals. Coming off recent surgeries and needing kidney dialysis, he was in and out of three hospitals before deciding he had enough.

He shared with a few of his friends that he was determined to die at home, not in some hospital bed. His insistence got him back home a week ago. He affixed a large notice to his refrigerator that he was not to be transported to a hospital under any circumstances.

Before he left Oregon Health & Science University in Portland for the last time, he lectured a gathering of doctors on the importance of the quality of life. The room grew quiet as Bob explained why he would rather have a shorter life at home than continue to suffer the attempts to halt his decline in the cold confines of a hospital room.

It was a teachable moment that the former Joseph Lane Middle School instructor couldn't pass up.

He did the same thing 14 years earlier, when he used his diagnosis of having a fatal disease to teach his students about living and dying.

Bob crammed what life he could into his final years. Even though needing dialysis, he returned to a remote town in Brazil a few years ago to rekindle friendships where he had served in the Peace Corps in the late '60s.

For as long as he could, he kept up his daily forays to his favorite North Umpqua River swimming hole. After his dips, he would sit on the shore and lose himself in a newspaper or a book, sometimes puffing a cigar and enjoying one of Oregon's microbrews.

In his retirement, he became active politically and led a movement to return a statue of the goddess Hebe to downtown Roseburg.

Through the ups and downs, the good and bad, what stood out about Bob Heaton was his indefatigable spirit. Even in his final days, he would break into an engaging grin and laugh over a story, warming visitors more than they warmed him.

He had the incredible support of his wife, Katie, and daughters Laura and Jane Heaton. Daughter Maggie Matteucci also came from Idaho to help him toward the end.

Bob taught me a thing or two. The most important was to take what life gives you and relish what you have. Whenever things seem bad, I take a lesson from Bob and appreciate what really counts in life.

I smile and can hear him say with a laugh, "I woke up breathing this morning."

Bart Smith is editor of The News-Review. He can be reached at 957-4203 or e-mail: bsmith@newsreview.info.

This story has been posted in the following forums: : Headlines; COS - Brazil; Cancer; Obituaries