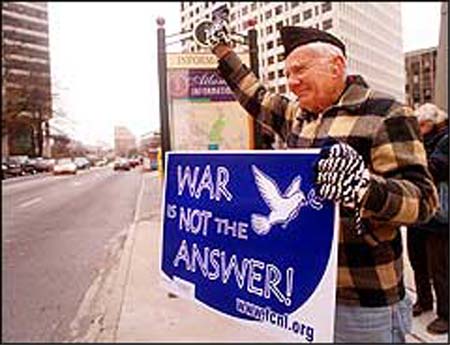 The spirit of the '60s, it seems, is alive and well. On Nov. 5, five war protesters were quietly hauled off to the slammer for staging a sit-in protest at U.S. Sen. Zell Miller's offices in Colony Square.

The protesters, who immediately dubbed themselves the Atlanta Five, had phoned, e-mailed and written Miller's offices several times over the past two months. They were looking for a face-to-face with the senator so they could ask him 20 questions about the resolution -- backed by Miller -- that authorizes President Bush to use military action against Iraq.

Some of the questions they sent were tame; others were not. Among the more provocative questions posed by activists Joe Parko, Carol Bass and Beth Lavoie:

"Won't such a war increase the probability of terrorist attacks on the U.S.?"

"What are the long-term consequences of a U.S. 'go-it alone' approach?"

"How many would be killed or maimed in such a war?"

All are questions yet to be addressed by the mainstream media, much less Democrats in Congress. And they're certainly not questions that Miller, an ardent backer of Bush's foreign policy, wants to field from a bunch of peaceniks -- even if those questions are perplexing many Americans. In a letter, Miller declined the protesters' request to meet.

Last Tuesday, the three letter writers, joined by Randy Aronov and 80-year-old Quaker activist Courtney Siceloff, headed to Miller's Colony Square office. They informed the senator's staff that they wouldn't leave until Miller scheduled a face-to-face meeting with them. Miller's staff told the protesters he wasn't in the office that day, and that they had no way of getting in touch with him to schedule a meeting.

Sensing a blow-off, the protesters didn't budge. They stayed in the office until that evening, when Miller's staff tried to close down the office. Security guards and Atlanta police officers carted them off to jail.

"We tried for months to get Zell Miller to listen to our concerns about war on Iraq. His response was, 'I have no desire to listen to people who disagree with me,'" Parko told the Atlanta Municipal Court at his arraignment. "Zell Miller is acting more like our ruler than our representative. This is supposed to be a government of, by and for the people, and we intend to see that it stays that way."

Meanwhile, all five protesters were charged with criminal trespass and face a trial in about six months -- about the time the country could be knee-deep in a war with Iraq, or ramping up still, or cleaning up.

Last Saturday, the protesters -- now calling themselves the Atlanta Five -- were cheered by 2,500 anti-war demonstrators at a march from the Martin Luther King Center to a rally at Centennial Olympic Park.

Few could resist comparing the day's events to the anti-Vietnam protests of the late 1960s and 1970s. Among the speakers were legendary civil rights activists Rep. John Lewis and Joseph Lowery, who co-founded with King the Southern Christian Leadership Conference.

When Parko hit the stage, he told the crowd about Miller's refusal to meet with them, the sit-in and the arrest. But he was adamant:

"We will have peace. We want to ask you this question: Are you willing to do everything you can to stop this war? Only we the people can stop this war."

This story has been posted in the following forums: : Headlines; COS - Afghanistan; Peace Builders; War with Iraq