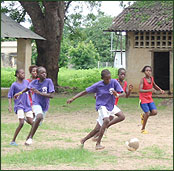 Caption: Senegalese boys participate in an 'international' tournament wearing jerseys donated by American towns, including Lincoln. Above, girls and boys arrive at the elementary school in Kounkane for the tournament. (Courtesy photo)

Imagine five rickety minivans pulling up to an elementary school located in Kounkane, a small town in southern Senegal, West Africa. Imagine the shouts of laughter and excitement belting out of these minivans as 100 children, 10 coaches, and five Peace Corps volunteers exit. The energy and noise permeating from this small area could be felt and heard miles away.

The day was July 30, 2004. Five villages came together to compete in a soccer tournament and fight for the Kounkane Cup. Throughout the year, Thomas Coyne of Philadelphi,; Paul Menard of New Bedford,; Patricia Owen of St. Paul,Minn.; Allison Youart of East Lansing, Mich; Michael Comer of Wellesley,; and Deborah Comer of Hong Kong, all Peace Corps volunteers in the region of Kounkane, organized and held village boys and girls soccer games.

Thanks to family, friends, and schools back home, our children wore American soccer jerseys with pride. Each village represented and wore jerseys from their volunteer's hometown. The children and residents of Dialicounda, the village of Peace Corps volunteers Michael and Deborah Comer, would like to thank Wellesley High School and teacher/coach Caroline Nesbit for donating uniforms.

And Kabendou, the village of Peace Corps Volunteer Allison Youart, would like to thank Lincoln Youth Soccer and the Hicks family of Lincoln for donating uniforms.

The day started with a brief explanation by Michael Comer of the rules and regulations of the tournament. He and Tom Coyne had devised a schedule where all the teams played each other in 20-minute matches. A win was worth 3 points, a tie 1 point, and a loss 0 points. The teams who acquired the most points at the end of the day went on to the finals.

After a rocky start of getting the teams where they were supposed to be, the games began. With the help of Senegalese coaches and Peace Corps volunteers, the matches went smoothly, and the children quickly fell into a routine. The excitement was contagious. In the midst of keeping track of game time, making sure the children had enough water, and cheering for my teams, I took a breather once in a while, looked around, and soaked in the excitement. My husband and I were in a small town in Africa watching 100 children participating in their first soccer tournament. What an amazing experience.

Kabendou, wearing Lincoln Youth Soccer uniforms, played extremely well, however, neither boys nor girls reached the finals. Despite these outcomes, Michael, Allison, and I were very proud of our teams' effort. They gave it their all and took the losses as adults.

At 2 p.m. we all took a much-needed lunch break. Our exhausted, sweaty, but still smiling children devoured lunch, relaxed, and hung out with each other. The Peace Corps volunteers organized a deejay for some music entertainment, a welcomed surprise for the children. At four p.m. the finals began.

The Peace Corps volunteers, coaches, and children had a fun-filled day. It felt great to provide this event for our children. We were proud of the great sportsmanship they displayed, even those who did not make it to the finals.

Thank you again to Lincoln and Wellesley for your generous support of sports in rural southern Senegal, West Africa.

This story has been posted in the following forums: : Headlines; COS - Senegal; Sports; Soccer