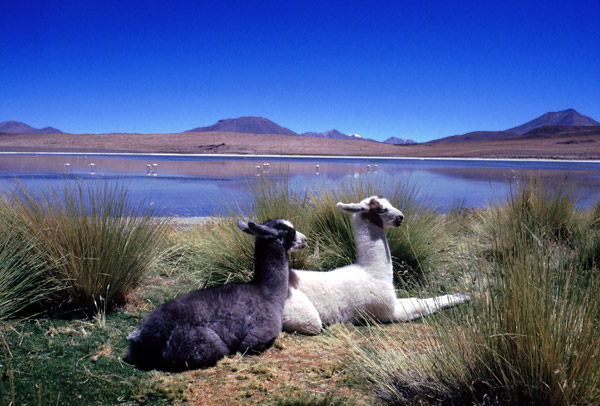 Matta, who is working on her master's at OU in international development, is staffing a "Spotlight on Africa" Peace Corps information table on Wednesday, Feb. 26, from 10 a.m. to noon in Baker Center.

Danielle Matta said she was prepared for the rural setting of Ingre, which is a six-hour bus ride from the nearest town. What she did not expect to find was a sense of contentment among the underprivileged Guarani with whom she worked.

"The thing that struck me was that, despite the fact that they are so poor, they are also very happy," Matta recalled. "Their family's very important to them. They were always joking around, getting together and having parties."

Matta spent just over two years in the Peace Corps, volunteering in four Guarani villages in southern Bolivia. She worked within the small-business group, helping out in Guarani community stores and assembling a library in the non-Guarani village of Ingre.

Since the Guarani are largely subsistence farmers who share and barter goods among themselves, they were adjusting to the use of money, Matta said. Each village had a small community shop that sold basic goods. They set up the community stores in 1995 when they gained liberation from the patron system -- a form of indentured servitude under which the Guarani worked for white upper-class farmers in exchange for food, shelter and clothing. According to Matta, the Guarani began banding together to secure their rights in the '80s, and in the early '90s they held a series of marches on Le Paz, the capital of Bolivia.

"The agency that I was assigned to worked for the Guarani. They helped them to get rights to their land and helped them find funding to form these community stores," Matta said. "Because they were so far isolated, they couldn't really buy products or goods. Everything was really expensive because they had to bring it six hours from town."

The Guarani in these small villages of 100-200 people sold their main crops, corn and peanuts, once a year, and spent all of their money right away, according to Matta. "The problem was that they never used money under the patron system, because the patron always provided for them," she said. "So they didn't know how to manage money at all."

"So, I would try to give them different incentives to pay back their credit, like giving them a bag of sugar or knocking off some of their debt if they paid back a certain percentage," she said. "I charged interest rates and helped keep inventory in the stores. I also worked with families to help them plan budgets."

Matta found spare time to launch a library project in Ingre. She went door to door, asking the community what they thought they needed. The consensus was textbooks. "Most kids didn't have access to textbooks. Only one or two kids in the class could afford a textbook," she said. "So the teachers would have to assign group homework, so they could all share."

Matta obtained a $5,000 grant through the Peace Corps to start the library. The community already had a building for it, so she set out to buy books. "I ended up doing a three-week book-buying tour of Bolivia. I went to all the major cities and bought books," she said.

She returned to Ingre and organized the library, shelving books according to subject matter. She helped form a library committee, composed of parents and teachers. "We opened the library and I was working in it, because we didn't have a salary for a librarian," Matta said. "So I talked a lot with the mayor from the other town, and we finally got a salary for a librarian. Someone was going to start that job after I was gone. The library was turned over to the committee when I left."

Matta discovered that, although the Guarani communities got along with one another, tension existed between the Guarani and non-Guarani communities. "When I was working on the library project in Ingre, which is non-Guarani, the Guarani would ask me why I was helping them," she said. "The people in Ingre would ask me why I was helping the Guarani, saying they're lazy and won't pay back their debts. Like in many Latin American countries, there is definitely racism toward the indigenous groups."

Although the Guarani villages are relatively egalitarian, bearing a consensus-approved leader, Matta said the society is still patriarchal. "Women don't have much say at all, but they pretty much do everything," she said. "They work sunup to sundown, sometimes even helping their husbands in the fields. They seem OK with it because this is how it's always been, and they don't have much to compare it to. They have women's groups and sometimes get together and do different things, but they're generally very subservient."

The Guarani welcomed Matta, graciously inviting her into their adobe huts for dinner. "They were always giving me the best piece of meat or the biggest piece of cake, or they were getting up to give me their seat," she said. "Another volunteer had been with them in the past, and they had a really good experience with him. So, they were excited to have another one."

The Guarani often drank boxed white wine with soda, mixed or unmixed pure alcohol and chicha--a beer made from corn that is consumed in both fermented and unfermented forms. "During the winter, some of them would drink rubbing alcohol straight out of the bottle, or they would mix it with cinnamon tea or boiled milk with cinnamon and sugar," she said. "They were both really good, actually."

MATTA SAID SHE HOPES TO LAND A summer internship in the Dominican Republic, working with a micro-credit institution.

"There's something called the Women's World Banking, based out of New York City, and they have affiliates in different countries," she said. "They focus on making small loans to women so they can go out and start a business. So, I'm looking at one in the Dominican Republic."

Matta expressed enthusiasm about the number of Peace Corps applicants from OU. According to a previous article in The Athens NEWS, the number of OU graduates applying jumped from 12, from October 2000 to October 2001, to 31 the following year. "OU has the highest rate of improvement in the region," Matta said.

Applicants must hold a bachelor's degree when they enter the Peace Corps, Matta said. Previous volunteer work and a second language are preferred, but not necessarily required. "Right now, the Peace Corps is really pushing for French speakers for the francophone countries in Africa," she said.

For more information about the Peace Corps, contact campus representative Matta at 593-0290 or peacecorps@ohio.edu.

This story has been posted in the following forums: : Headlines; COS - Bolivia; Small Business