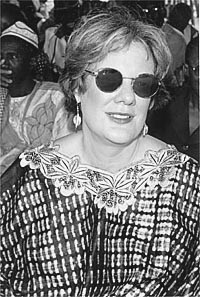 By Sara Watson Arthurs The Times-Standard

Melching is executive director of Tostan, a Senegal-based organization that works to end the practice of female genital cutting and educate African villages on health and human rights efforts.

An Arcata couple, Dave Orphal and Sharona Thompson, spent the last year in Senegal helping with that education. Thompson, who served in the Peace Corps in Senegal from 1998 to 2000, wanted to return.

Orphal, a social science teacher at Zoe Barnum High School, wanted to develop an internationally themed curriculum. He brought a laptop computer and digital camera to Africa, planning to make some films for his students.

Instead, he and Thompson, who had no experience as filmmakers, found themselves making documentaries on Tostan's efforts that may be shown to a wide international audience.

Tostan, which means "breakthrough" in the Wolof language, is a nonprofit organization aiming to empower African communities to take charge of their own development through learning about human rights, hygiene, literacy and democracy.

For example, Tostan teachers provide communities with health information on female genital cutting, a traditional practice in some African societies which is now being abandoned because of the health hazards. Since 1997, more than 1,300 Senegalese villages with about 600,000 people have publicly declared to end female genital cutting and early and forced marriage.

Thompson and Orphal interviewed residents of several villages about why this was important to them.

A woman named Jari Bah said she had been performing the cutting since before Senegal gained its independence in 1960, a tradition passed on from her ancestors for centuries. But, after discussing the consequences of the practice and talking with her fellow villagers, she decided giving it up was the right thing to do.

Traditionally, cutting has been seen as a way to make a girl "marriageable," so villages as a whole rather than individual families must make the decision, Orphal said.

Thompson recalled one nurse who spoke of the devastating health consequences, including infections and increased maternal mortality.

Health education is so limited that some villagers had trouble understanding that viruses and bacteria could spread disease even though they can't be seen, Orphal said. A Tostan lesson demonstrated the concept using perfume -- invisible, but when someone wearing it shook hands with another person the scent could spread.

"The vaccination rates have improved by 90 percent," Thompson added.

Other Tostan lessons focused on human rights and health issues like sanitation. American-style garbage collection doesn't exist in Senegal, but individual villages are creating systems to clean up plastic and debris. Thompson and Orphal filmed a group of villagers cleaning their marketplace in this fashion for the first time.

Such movement toward taking pride in one's community is also inspiring people to be sure to get "identity cards" -- like a Social Security card or driver's license -- to allow them to vote in elections and their children to attend school, Orphal said.

Some of their footage will be shown at Monday's event. It's sponsored by the American Association of University Women, Six Rivers Planned Parenthood and the Humboldt State University women's studies and anthropology departments.

The event is free, although donations are being collected for Tostan. It starts at 7 p.m. Monday at the Arcata Community Center.