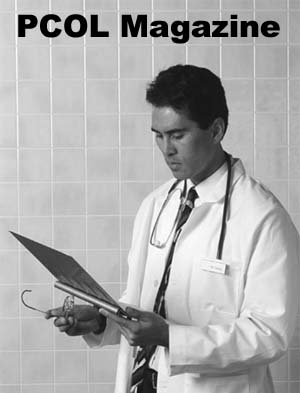 Epidemic diphtheria has reemerged in 14 of the 15 New Independent States (NIS) of the former Soviet Union (1); during 1994, a provisional total of 47,802 cases and 1746 deaths from diphtheria were reported throughout the NIS. This report describes one confirmed and one probable case of diphtheria acquired in countries where the disease is epidemic (Russian Federation and Ukraine) by U.S. citizens during November and December 1994.

Patient 1. A 42-year-old woman, born in Russia but living in the United States for several years, arrived in Moscow on November 22. She had onset of fever and sore throat on December 6 and was hospitalized on December 7 with a provisional diagnosis of diphtheria. Her vaccination history was unknown, and she was not aware of contact with diphtheria patients or carriers. She was treated with 9000 international units (IU) of equine diphtheria antitoxin, antibiotics, and prednisone. On December 8, she was transferred to a referral hospital in Helsinki; findings on examination included a pharyngeal membrane. Treatment included administration of 40,000 IU of antitoxin, penicillin G (for 6 days), and several days of roxithromycin. Toxigenic C. diphtheriae, biotype gravis, was isolated from a pharyngeal culture obtained December 9. Follow-up cultures on December 12 and 15 were negative. Her antitoxin level was measured in Helsinki by Vero cell neutralization assay and was greater than 5 IU/mL; however, the level measured by an enzyme immunoassay that is specific for human antibodies was less than 0.03 IU/mL, indicating that the Vero cell assay was detecting recently administered equine antitoxin. She recovered fully without complications.

Patient 2. On November 28, a 22-year-old woman from New Jersey working in Kherson in southern Ukraine since June 1994 had onset of a sore throat; she was hospitalized on November 29 with a provisional diagnosis of diphtheria. She had received five doses of diphtheria and tetanus toxoids and pertussis vaccine (DTP) during childhood and an adult formulation tetanus and diphtheria toxoids (Td) booster in August 1991. She had no recognized contact with a known diphtheria patient or carrier. Findings on examination included a tonsillar and posterior pharyngeal membrane. The patient had treated herself with ciprofloxacin for 1 day and had had at least one dose of oral penicillin before a throat culture was obtained (the culture was negative). Treatment comprised 80,000 IU of diphtheria antitoxin and a course of parenteral penicillin. A diphtheria antitoxin level of 0.2 IU/mL by Vero cell neutralization assay was detected in both a blood specimen obtained at the time of her arrival in Ukraine in June 1994 and a convalescent sample. She recovered fully without complications. Reported by: J Vuopio-Varkila, MD, R-M Olander, MSc, National Public Health Institute; V Valtonen, MD, Helsinki Univ Central Hospital, Helsinki, Finland. R Crooks, MD, C Stewart, Office of Medical Svcs, Peace Corps, Washington, DC. Childhood and Respiratory Diseases Br, Div of Bacterial and Mycotic Diseases, National Center for Infectious Diseases; Child Vaccine Preventable Diseases Br, Div of Epidemiology and Surveillance, National Immunization Program, CDC.
Editorial Note

Editorial Note: Diphtheria is a potentially severe illness; among persons who are unvaccinated, the case-fatality rate ranges from 5% to 10%. The disease is rare in the United States: since 1980, five or fewer cases have been reported each year, and since 1988, all reported culture-confirmed cases have been imported. However, based on serologic studies, 20%-60% of U.S. adults aged greater than 20 years are susceptible to diphtheria (2,3). The two cases described in this report are the first known to have occurred among U.S. citizens from exposure during the current epidemic in the NIS and emphasize the risk for persons who travel to countries with epidemic diphtheria. In addition, these cases suggest the potential for importation of toxigenic strains of C. diphtheriae to the United States by persons who arrive from affected areas. Although importation of diphtheria from the NIS to the United States has not been reported, at least 20 imported cases related to this epidemic have been reported in European countries (4-6).

The diagnosis of diphtheria was confirmed by culture in the first case in this report. Although diphtheria was not laboratory-confirmed in the second patient, the clinical diagnosis was made by physicians experienced in diagnosing and treating diphtheria, and the CDC case definition for a probable case was met (7). Her negative throat culture does not exclude the diagnosis because she had begun antibiotic therapy before the culture specimen was taken. In addition, levels of antitoxin greater than or equal to 0.1 IU, as those present in this patient, are considered to confer a relative degree of protection against disease (8); although no level of antitoxin provides absolute protection (8), this patient appeared to have relatively mild disease and did not develop toxic complications. Because clinical diphtheria may not induce protective immunity, the lack of an increase in postdisease antitoxin level would not exclude the diagnosis; booster vaccination with an age-appropriate diphtheria toxoid-containing vaccine is recommended during convalescence (8).

To minimize the risk for diphtheria, all U.S. residents should be up-to-date for diphtheria vaccination, regardless of whether they plan international travel. The Advisory Committee on Immunization Practices recommends that all children receive a routine series of five doses of DTP (or diphtheria and tetanus toxoids for pediatric use {DT} if pertussis vaccine is contraindicated) with doses at ages 2, 4, 6, and 12-15 months, and 4-6 years; Td boosters should be given at age 11-16 years, and every 10 years thereafter (9,10). For persons aged greater than or equal to 7 years who have not been previously vaccinated against diphtheria, the primary series consists of three doses of Td, with intervals of 1-2 months between the first two doses and 6-12 months between the second and third doses; Td boosters should be given every 10 years thereafter. To improve diphtheria-specific levels of immunity within the population, active vaccination against tetanus given as part of wound management should involve use of a vaccine containing both diphtheria and tetanus toxoids rather than single antigen tetanus toxoid (i.e., DTP {or DT if pertussis vaccine is contraindicated} for children aged less than 7 years and Td for persons aged greater than or equal to 7 years). Travelers to areas with endemic diphtheria or outbreaks should consult their medical providers to ensure they are adequately vaccinated. Travelers should have completed a primary series of at least three doses of diphtheria toxoid and should have received the most recent dose of vaccine (either primary series or booster) within the previous 10 years. In addition, travelers to affected countries should be advised to contact a health-care provider promptly if they develop a sore throat during either travel or the 2-week period after return from travel.

ACIP. Diphtheria, tetanus, and pertussis: recommendations for vaccine use and other preventive measures -- recommendations of the Immunization Practices Advisory Committee (ACIP). MMWR 1991;40(no. RR-10).
10.


Disclaimer All MMWR HTML versions of articles are electronic conversions from ASCII text into HTML. This conversion may have resulted in character translation or format errors in the HTML version. Users should not rely on this HTML document, but are referred to the electronic PDF version and/or the original MMWR paper copy for the official text, figures, and tables. An original paper copy of this issue can be obtained from the Superintendent of Documents, U.S. Government Printing Office (GPO), Washington, DC 20402-9371; telephone: (202) 512-1800. Contact GPO for current prices.
**Questions or messages regarding errors in formatting should be addressed to mmwrq@cdc.gov.

This story has been posted in the following forums: : Headlines; COS - Ukraine; COS - Russia; Infectious Diseases; Safety and Security of Volunteers; Special Interests - Diptheria