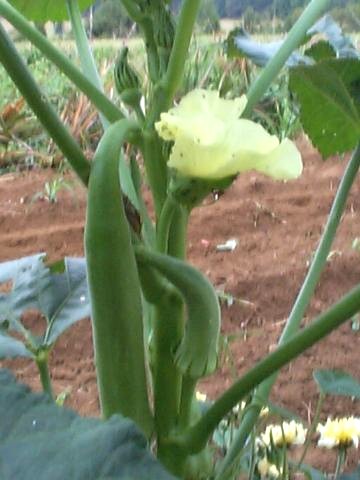 Good Enough To Eat: Okra and black-eyed peas? Give it a try, y'all

By CHRIS SMITH
SPECIAL TO THE POST-INTELLIGENCER

If it's been a while since you've been adventurous in your garden, it's time to lighten up and try something new. To help you sort out the promising from the far-fetched, I'll share my experiences trying to cajole some less common vegetables into production.

Even though I don't come from the American South, I like okra. It's fuzzy exterior and gelatinous interior don't trip my gag reflex. I got familiar with this vegetable while in Turkey with the Peace Corps and decided to grow it in my Port Orchard garden when an early variety, Annie Oakley, was first introduced.

My experience with Annie wasn't altogether successful. As I recall, germination of the seed was spotty, and I wound up with only a few plants. Maybe my ground was too cold; okra is a heat-loving crop. The survivors though, were handsome, healthy specimens that duly flowered and produced little pointed pods.

I should have picked the pods when they were 2 to 3inches long instead of waiting for them to get 5 to 6inches long, at which point they're woody. Earlier picking would have stimulated more production too.

I'm ready to give okra another try, this time with Cajun Delight, an All-America Silver Award winner that ripens 10 days ahead of Annie Oakley. In mid-April I'll soak the seeds for an hour to soften their coats. Then I'll start them indoors in paper pots over my heated propagation mat. To further increase the odds of having enough plants, I'll sow three seeds per pot and thin to the best seedling.

Once I've hardened them off, I'll set the seedlings outdoors 9 to 12 inches apart through silver plastic mulch. I'll probably use a floating row cover as well. The mulch and row cover deter pests and capture extra heat around the plants.

Cajun and Middle Eastern cookbooks have good recipes for the crop. It cooks especially well with tomatoes.

Until I grew them myself, I regarded sweet potatoes, including yams, as a Southern vegetable unsuited for Northern gardens. One spring Al McHenry, Master Gardener coordinator for Whatcom County, bent my ear about the fun he'd had growing several kinds of sweet potatoes in his garden. I figured if Al could grow them in the Bellingham area, I could bring in a crop in Port Orchard.

That same spring I ordered a dozen Georgia Jet slips (roots) from Burpee. By the time the slips arrived, I had made a raised bed about 15 feet long by 4 feet wide, hoed a furrow down the middle and covered it with black plastic sheeting. It remained to cut holes in the plastic to set the slips.

The slips soon turned into vigorous, vining plants. I fertilized them lightly through the holes cut in the plastic and they got their water via those holes as well, with the furrow down the center of the bed helping to distribute it.

At harvest time I had yams. To be honest, there was about one good-size yam per plant, several medium-size ones and a passel of scrawnies. All tasted good, though. And while I didn't feel like a son of the South, I took a certain pleasure in being able to grow one of its crops.

For me, eggplant has been an "iffy" crop. When summers have been long and hot, varieties like Dusky, which produces 7- to 8-inch-long fruit, Short Tom, with 3- to 4-inch, slim, Japanese-style fruit and Bambino, which bears walnut-size purple fruit, have ripened. In less clement years, my plants have been attractive, purple-veined, purple-blossomed ornamentals.

If you'd like to try your hand, start with early varieties like those I've mentioned. Buy starts or grow them indoors in early April for planting out in early June. I've not grown my eggplants on silver plastic mulch or used a floating row cover. According to Territorial Seed Co., whose cultural advice is sound, mulch and row cover speed growth, encourage flowering and increase yield.

Chris Smith, who lives in Port Orchard, is a Master Gardener and is retired from the WSU Cooperative Extension. His columns appear in the P-I garden pages on Thursday. Send questions to P.O. Box 4426, South Colby, WA 98384-0426.

This story has been posted in the following forums: : Headlines; COS - Turkey; Cooking; Okra