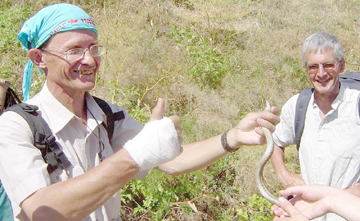 European tourists handle a snake captured while hiking in the Tien Shan Mountains. The group also observed petraglyphs of ibex.

Author and tour guide Jim Glendinning of Alpine is living in Kazakhstan and teaching English and business skills as a Peace Corps volunteer. His reports from the central Asian country appear periodically in The Desert-Mountain Times. He can be reached at jimglen2@hotmail.com.

“Would you like to see ancient petraglyphs in Tien Shan Mountains?” asked Vladimir Shakula. I knew the Aksu Zhabagly Natural Reserve in the western Tien Shan range of Kazakhstan possessed exotic wildlife, abundant flora, 49 glaciers and snowbound mountains over 4,000 meters. But I didn’t know about the petraglyphs. So this is why I found myself recently with a group of Scottish nature lovers on a hike into the northern part of the reserve, guided by Vladimir Shakula, co-founder of Wild Nature ecotourism agency and a trained wildlife biologist

By 8:30 a.m. our group of five persons left the village of Zhabagly, our jumping off point, and an hour later crossed a barrier marking the entrance to the park. The jeep road we followed led us steadily upward, and soon Zhabagly was far below on the plain. The mountain slopes were well covered with grass, a profusion of flowers and various shrubs, particularly juniper. By noon, we reached our first hut, Kishiekayende. We were joined almost immediately by our guide Vladimir, leading the horse that carried our packs, our lunch and his son Igor. We ate our picnic lunch under a tree outside the hut, looking across to a waterfall. Higher, snow patches still covered the north-facing slopes, even in mid-August.
After lunch, we continued – Vladimir leading. Trained as biologist, employed in the 1990s as senior scientist in the reserve, Vladimir soon started pointing out what we would otherwise have missed. Pointing to a paw imprint in a mud patch, he said, “Wolf!” Shortly after, his eagle-eyed son Igor spotted a two-foot-long snake, which Vladimir instantly scooped up, showing us its markings and explaining its diet.
We balanced precariously on rocks to cross a succession of fast-flowing streams, then emerged into upland pasture, a riot of blue, yellow, pink and purple flowers. Our group, all nature lovers, exulted in this surprise feast: grasses blowing in the light wind, fragrant scents from the pinks, the bright colors of delphiniums, allium and amaryllis. They started a flower count, reached 40 and gave up, estimating that there were up to 100 species.
Energized by the beauty and aroma of the flowers, we pressed on, disturbing partridge resting by the trail. Later, above a lake we dubbed “Dead Girl Lake,” we watched a kestrel hovering, as Vladimir told the tragic tale of love and death from which the lake got its name. From time to time, he stopped, pointing out the evidence of wildlife. Once, picking up some dried, white wolf scat in his hands, he pointed to what remained of the wolf’s last meal – fur and the vertebrae of some small animal.
By early evening we reached the second hut, Ulkenayende, clean but bare of much furniture except some beds with springs, a table and benches, and an old stove. The doughty Scots were little troubled by this and set about making tea. Alas, the tea had been forgotten. No problem for Vladimir, who gathered peppermint leaves and rose hips from bushes near the hut. After a simple meal of sausage, noodles, bread and cheese, we scattered ourselves around the hut and turned in after a day of bright, breezy weather, several surprises and 12 miles covered.

We are up and away at 8:30 a.m. after tea and a snack. We have a five-hour climb to reach the petraglyphs. Again, Vladimir serves as our eyes, pointing out a disturbed patch of ground where wild pigs have rooted for food, a flattening of grasses where a bear has rested. After two hours, we leave the trail, heading steeply uphill under darkening skies. The vegetation thins as we climb higher; the rocks get larger. We puff and pant, stumbling across the trackless terrain.
Just as the going gets easier, Vladimir finds an ibex skull and two rounded horns and one of our group gives a shout. She has found the first petraglyph, a rough image of some ibex carved into the side of a large freestanding boulder. We are almost at 10,000 feet, a rock-strewn basin surrounded on three sides by mountain peaks. It’s our destination.
As we stop for lunch, rain threatens. This is nothing to the Scots, whose ironic banter thrives at times of possible discomfort. We separate to wander across the jumbled landscape, every so often a cry going up when a new, or different carving is found. The subject matter is mainly ibex, a goat-like mammal with long curving horns that lives in the Asian uplands. Some carvings were of horses, or wolves, even camels, occasionally a man, and on one of them a cross. These simple carvings have not much grace but a crude vigor.
They were carved, any time from 800 to 2,000 years ago, by cow and goat herders who had driven their animals in high summer to this upland grazing. Suddenly, we hear falling rocks, and Vladimir grabs his binoculars. After scanning the mountain ridges, he grunts with satisfaction, hands the binoculars to us. With difficulty, we can see, high above us on a ridge just below the clouds, eight or nine fawn-colored ibex, motionless sentinels.
The wild terrain, the rough art, the imminent rain, the distant ibex, this is enough – it’s time to go. We head downhill and back to our hut, which we reach three hours later after a 10-hour day on the mountain.

Heading downhill after finishing most of the remaining food, we take an alternative route, passing through a small juniper forest. This versatile bush, here growing to 30 feet as a substantial tree, elsewhere in the range flourishes as a berry bush, a favorite for bears, or in its reduced size at higher altitudes as a mattress for park personnel to sleep on. We stop for lunch again at Kishiekayende hut and contentedly continue to the park’s boundary. We take a taxi for the last two miles, feeling we have earned it after an energetic and uplifting trip into wild nature in the Tien Shan range.

This story has been posted in the following forums: : Headlines; COS - Kazakhstan; Hiking