Alisa Woofter to join the Peace Corps and move to Bolivia 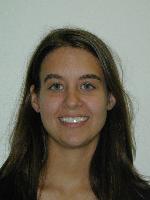 Alisa Woofter to join the Peace Corps and move to Bolivia

She loves to travel, wants to live abroad, and speaks Spanish. It seemed natural to Alisa Woofter to join the Peace Corps and move to Bolivia.

Woofter left Sunday for orientation in Miami. She was scheduled to fly, with other Peace Corps volunteers, to Bolivia Tuesday for three months of in-country orientation in Cochabamba.

After becoming acclimated to the area, the volunteers will be placed around the country. Woofter will be teaching micro-enterprise development, and maybe business classes.

"They make you think you'll be living in a small town, but with business I could be placed in a small area or a city," she observed.

"I'm not sure what I want. I like my running water," the 2000 Chase County High School graduate laughed.

Bolivia is one of the poorest countries in South America, Woofter said. It is trying to develop tourism, especially hiking and outdoor activities.

So, Woofter could be working with individuals, non-profit organizations or companies interested in expanding tourism. "How to make money and just not sustain their lifestyle" is how she put it.

Woofter obtained a B.S. in Management in International Business, with a minor in Spanish, this spring from Iowa State University. She became interested in the Peace Corps initially while attending a career fair during her first years in college.

"I wanted to travel and live abroad," she recalled, so began researching the Peace Corps.

After filling out a 16-page application and providing references, Woofter survived a medical clearance and a legal background check to qualify as a volunteer.

She was able to specify the region in which she wished to be placed, and found out several months ago that Bolivia would be her home for two years and three months.

Her interest in the area was piqued not only by her knowledge of Spanish, but by college studies in Costa Rica for three months and a two-week study in Peru her freshman year.

She's fascinated by the Inca culture, and plans to take several trips pertaining to that history. She may also return to the States for a vacation during her two-year commitment.

Last Thursday, Woofter was contemplating her packing. She was allowed to take 100 pounds of luggage. Her books will be supplied there, but she was packing a sleeping bag and had just purchased a solar shower.

The 22-year-old also had to buy business clothes, as all professionals in Bolivia dress for business every day.

She's taking her laptop computer, and can be e-mailed at awoofter@aol.com.

The enormity of leaving the United States hadn't hit her yet, Woofter said. She was still trying to get over leaving friends in Ames, Iowa.

She's ready for her new challenge, though. She's looking at the Peace Corps as part of her future plans.

"Ideally I'll go to grad school, then find a job in international business like a non-profit organization. I don't think I've been introduced to all of my options yet, and this is one of the steps for that."

She's also looking forward to meeting the people she'll be helping in Bolivia. Sixty-five percent of the population is indigenous, speaking Quechua, the official language of the Inca empire, as well as Spanish.

There's so much to learn about the Incas, as well as so much to give to them. Woofter is ready.