My sister Erin My sister Erin is a Peace Corps volunteer in the Islamic Republic of Mauritania; that made this remote country my destination 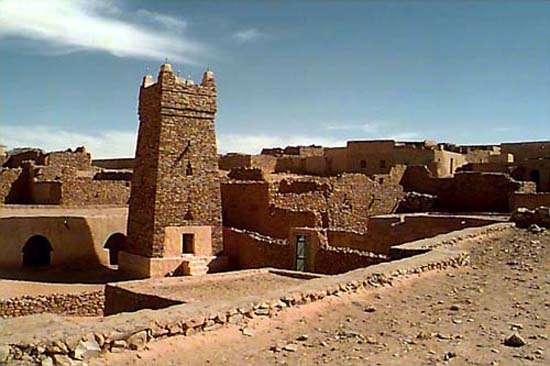 My sister Erin My sister Erin is a Peace Corps volunteer in the Islamic Republic of Mauritania; that made this remote country my destination

Mauritanian generosity unsullied by globalization
By Jessica A. Pettigrew

Jessica Pettigrew grew up in Rapid City and graduated from Central High school in 2001. She is a student at McGill University in Montreal, completing an Honours degree in International Development.

As a student in Montreal, the -30 degree winters tax me. Growing up in Rapid City, I thought that I understood cold winters. I was wrong. I needed heat and a break from the books. I needed an adventure. My sister Erin is a Peace Corps volunteer in the Islamic Republic of Mauritania; that made this remote country my destination. While there I could also engage in research for my undergraduate thesis, which loomed on the horizon.

Mauritania, on the northwestern coast of Africa, is Africa's South Dakota. It is the most sparsely populated country in the world. The terrain is mostly desert. Pale sand blowing across roads reminded me of snow blowing across the South Dakota plains. While we have cowboys who ride horses, they have nomads who ride camels. Not that different, right?

Wrong! My sense of isolation grew from the moment I eyed the ticket counter at the airport in Montreal. Most of the women in line were veiled, in the company of their husbands, and cradled dark-haired babies in their arms. I am blonde, wearing a long skirt and a T-shirt, and holding the hand of my boyfriend, who was staying behind. The connecting flight from Casablanca to Nouakchott (Mauritania's capital) increased that isolation. I was one of four women on the plane, the only one traveling alone, and the only woman not covered head to toe in a mulafa - brightly colored fabric worn by women that wrap around the head and extend to the ground.

Seeing Erin's uncovered head and bright smile at the Nouakchott airport was a relief. As we made our way into the city amidst donkey carts, camels, and goats, I said, "You really live in no man's land." She chuckled, "Oh Jessie. This is the capital city, you just wait."

The next day we began the two-day journey to Erin's village, Chinguetti. As our bush-taxi approached the village in the silent night, I thought to myself, "This is it, the place where cell phones don't ring and TV sets don't illuminate homes at night. This is where globalization has yet to take over."

I discovered that although Mauritania is among the world's poorest countries, cell phones do exist, TV sets light up many homes for the four-hour period each night that there is electricity and globalization has played an interesting role in sustaining Islam's 7th Holiest city.

From a stray backpacker to herds of grey-haired Europeans in bermuda shorts and fanny-packs, tourism is the dominant force behind Chinguetti's opening to the world. Tourists purchase nick-knacks, snacks, and sodas from the sparse shelves of closet-sized shops; they pay camel guides for sejours en camel into the Sahara. To respond to foreigner demands, the city's phone services - which arrived last year - have been put to use with telephone boutiques popping up where tourists may phone for a fee.

In the realm of transportation, a paved road was constructed between the regional capital, Atar, and Chinguetti. This 60-mile stretch reduces a previously one-day journey to a two-hour one, although each time it rains, large chunks of asphalt tumble off the cliff. The road has facilitated the movement of tourists and other goods to and from the otherwise isolated village.

These "other goods" are a byproduct of globalization. Canned pineapples from China, canned meats from Peru, and milk from Germany are sold in stores. Unfortunately, waste-management systems don't accompany these and the ever-shifting sands of the Sahara make construction of city dumps a nonviable option. The result? Streets covered with tin cans, boxes, diapers, and everything else people throw away.

This raises the question of the utility of goods purchased through the "global village." Globalization results in inappropriate consumption patterns. A glance at a Mauritanian's phone bill confirms this. Many Mauritanians spend at least half of their meager monthly income on their phone bill while lacking sufficient resources to provide nutritious foods or medical care for their children. This phenomenon is also seen among America's poor.

Globalization is inevitable and has allowed Chinguetti to flourish through tourism revenue. Mauritanian culture has not been lost but syncretized rather, combining indigenous and western elements to produce something unique. Levis jeans and Chicago Bulls T-shirts peek out from men's long blue and white bubus - the long robes worn by Moor men since the beginning of time. Life in the 110-degree heat maintains a pleasant lethargy.

Erin and I went to a young girl's house for lunch. In spite of the family's severe poverty, huge platters of food were served, followed by shot-sized cups of sweet mint tea. After that, the girls applied henna to our hands and feet, which turned our fingers and nails red-orange. They dressed us in their finest clothes; one girl took off the beautiful mulafa she was wearing and gave it to Erin.

Before I knew it I was well fed, had orange phalanges, was clad in a mulafa under a tent in the Sahara dancing to - you guessed it - Michael Jackson.

This story has been posted in the following forums: : Headlines; COS - Mauritania; Globalization