Togo RPCV Evan Wolfson has been pushing for gay couples to gain the legal right to marry since 1983, when he wrote his law school thesis at Harvard on the subject. 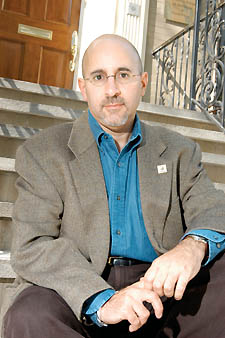 Togo RPCV Evan Wolfson has been pushing for gay couples to gain the legal right to marry since 1983, when he wrote his law school thesis at Harvard on the subject.

Then he patiently answered questions from the crowd gathered that included high school friends, Peace Corps colleagues and people from “the movement.”

The 242-page book includes 10 chapters answering key questions that Wolfson says seem to crop up the most often. It also includes four short sections at the end and a detailed list of local and national resources for people, he says, “who want to go out and do something.”
In a conversation with the Houston Voice the following day, he shared more.

HOUSTON VOICE: Why do you consider the term “gay marriage” or “same-sex marriage” inaccurate?

EVAN WOLFSON: I say in the book, on Page 17, that we’re not asking for “gay marriage” or “same-sex marriage,” which implies something lesser or different or other. Nor are we trying to “redefine” marriage, as our opponents like to put it. Rather, we are asking for an end to discrimination in marriage. We are seeking to participate in the same institution — with the same rules, same responsibilities and same respect. So the right term is “marriage.”

VOICE: You say you wrote the book for supporters of gay civil rights and for the “reachable, but not yet reached.” What does that mean?

WOLFSON: People in the middle who are right now wrestling with their position and who, on the one hand, may be somewhat uncomfortable talking and thinking about gay people. The ones who kind of wish this goes away or who feel some anxiety about change, but also want to be fair. They don’t want to be cruel. They want to do the right thing. So, the book is really aimed at engaging them. Walking through their questions. Each chapter is a question. Giving layer upon layer of answers. [I try to] reason with them and walk them through it.

VOICE: How does your book differ from the numerous other books out there right now about marriage rights for gay couples?

WOLFSON: I don’t want to criticize what’s out there but mine really is organized question by question. Each chapter is a question that over the years I’ve heard people wrestling with. … And I think it’s a strong mix of many voices. There are lots of stories and lots of quotes from non-gay as well as gay people. There’s a little bit of history. A little bit of law. And pretty hefty quotes from the opposition as well.

VOICE: How important are straight allies in this civil rights moment?

WOLFSON: Absolutely crucial. No civil rights movement is won solely by the people who are the primary targets of discrimination, important though their work is. We are a minority and we must reach out to persuade the majority, and to do that we need our non-gay brothers and sisters.

VOICE: Have gay civil rights leaders done a good job in reaching out to their allies?

WOLFSON: Yes, but there’s much more to be done and more that can be done. But this is not just about the leaders and the organizations, though their work is important. This is really about how each one of us, as a person, can do our part. You don’t have to be the head of an organization or the most super political person to help make change happen.

VOICE: In the book and during your appearance here, you seem comfortable drawing parallels between gay civil rights and the civil rights movement led by African Americans. How do you answer critics who object to this comparison?

WOLFSON: In Chapter 9, the second largest chapter in the book, I talk about this. First of all, the major civil rights voices in our country — people like Congressman John Lewis, Coretta Scott King, Julian Bond, the National Hispanic Leadership Agenda, the Asian American Legal Defense & Education Fund, the Japanese American Citizens League, and MALDEF [Mexican American Legal Defense & Educational Fund] — all these major civil rights voices have said they believe this is a civil rights question and they strongly support marriage equality.

Also, there’s something we all take from the African-American struggle: the real mandate and obligation to build on the work they did and continue making our country better. That obligation doesn’t just fall on African Americans and the successors of Martin Luther King. It falls on all of us, and I take that legacy very seriously.

WOLFSON: We have three concurrent tasks, and they are equally important. First, we must secure marriage in as many places as possible to make it a reality rather than a hypothetical. Nothing changes hearts and minds more than people getting to see this for real, rather than just as some scary right-wing rhetoric. When people get to see the couples en masse, or Del [Martin] and Phyllis [Lyon] in San Francisco, and see real families helped and no one hurt, we move people toward acceptance.

At the same time, we must repel attacks and efforts to roll back the gains we have won. And we must do this at the federal level and is as many states as we can.

We’re not going to win every battle, just as there are some states that will move faster toward equality where we are working, so our opponents will succeed in getting some states to resist and even regress. But we must work as hard as we can, and in as many places as we can, to repel attacks.

But it’s not enough to repel attacks, we must also have an affirmative discussion about winning equality and what that means. We can’t just rest on our success in preserving the status quo by defeating an attack.

We have to talk to friends, neighbors, family members, co-workers, legislators, judges, opinion leaders, clergy, and ask them to support marriage equality. Ask them to learn about how this discrimination hurts families and our countries. We should not just ask them to be against attacks, but for equality and explain what equality means.

It’s important to defeat the federal constitutional amendment [opposing marriage equality for gay couples] but that’s not where I want to celebrate.

The work is in the larger advance toward full equality. Otherwise, we’re just responding to the right wing’s agenda, rather than pursing our own.

And number three, we must concurrently enlist diverse messengers with compelling stories as voices for marriage equality who can reach the differing audiences we need to reach.

In particular, we must enlist non-gay champions and allies and gay people who can talk about the denial of marriage and how it’s harmed them and their families.

VOICE: Have you always believed this was the best strategy or did you come to this conclusion at a certain point?

WOLFSON: I’ve always believed that for true societal change in our democracy, political organizing, public education and outreach must accompany litigation.
The courts have a very crucial and valid role to play in this, as in other civil rights movements. But we can’t leave it just to the courts.

I also believe we owe it to our non-gay fellow citizens to give them the information and ask them to be fair. If we don’t ask them, how do we expect them to do the right thing? And sometimes, we have to ask more than once.

This story has been posted in the following forums: : Headlines; COS - Togo; Gay Issues; Speaking Out; Marriage