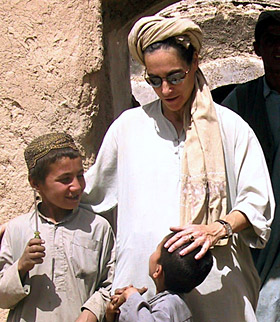 Without a parachute
Ex-reporter finds rewards in relief work

Caption: Sarah Chayes' work to rebuild an Afghan village became the subject of a documentary. (Photo: Eve Lyman for Life After War.)

Former NPR war correspondent Sarah Chayes has traded life on a rural dairy cooperative in Afghanistan for a temporary retreat in Paris to complete her book about the aftermath of war in the bombed-out country she has called home for more than two years.

In a few months, when she’s done with the book and has recovered from the grueling work in Afghanistan, she won’t return to deadline journalism, and doubts that she ever will, she told Current in a phone interview from Kabul. She expects to return to the struggling country to start a second dairy cooperative.

For most of her five years with NPR, Chayes had been a “parachute journalist,” covering ethnic cleansing in Kosovo, violent uprisings by Basque separatists in Spain, Hezbollah fighting in Lebanon and war crimes tribunals in The Hague. In her final reports for NPR, she covered the fall of the Taliban stronghold of Kandahar.

“I absolutely loved reporting. I liked the discipline of the objectivity and the requirement that you not take things at face value,” she said. “But there was this growing sense of ‘How was I helping by just observing?’… I was feeling more and more like a parasite, in a way, to the people who were actually doing something. That was a feeling eating at me over a number of years.”

She also found war reporting for American consumption to be particularly tough in the post-9/11 world, pressed by Washington-based peers and editors to see the conflict as many Americans do back home.

“It was as though, because the 9/11 attacks had taken place in the American nerve center, they had blown out the critical apparatus of the very people we had always trusted to have one. NPR was not entirely immune. …[A]s time went on, I sensed a rising impatience with my reporting,” Chayes wrote in the Columbia Journalism Review last year.

“I love NPR and I think it’s one of the most responsible and intelligent news organizations in the country, but I came under enormous pressure of a direct kind unlike anything I ever expected to experience in my reporting career,” she told Current.

So now Chayes has moved from reporting what sources say to being one herself.

Early in 2002 she began working for Afghans for a Civil Society, a Baltimore-based humanitarian organization run by the brother of Afghan President Hamid Karzai that had had no real presence in the war-torn country until Chayes invented the title of field director for herself. Her first project was to help rebuild houses in a village near Kandahar, in a rocky, barren region of southern Afghanistan.

She and the group also helped launch Afghan Independent Radio in Kandahar, created an income-generating embroidery project for women and held forums on crafting the country’s constitution and other political advocacy work.
Earlier this year Chayes moved on from ACS and began running a dairy cooperative in Kandahar. When interviewed by Current this month, two days before leaving for Paris, she said she had wrapped up that work also.

Chayes said it became clear to her that the investors in the dairy cooperative were using humanitarian assistance to “create assets they can pocket.” When she returns, she would like to start another dairy cooperative, and perhaps engineer other income-supplement schemes for farmers that would provide them with alternatives to growing opium poppies.

The book she’s writing, which has a Dec. 31 manuscript deadline, “is not precisely about my experience in Afghanistan, but I’m an actor in it,” Chayes explained. While there have been piles of books “that have explored how we get into a conflict, like the Balkans, analyzing and experiencing the conflict itself, there are not too many books about the part that comes after war.”

Chayes’ sojourn in Kandahar is not her first stab at relief work. In the ’80s she was a Peace Corps volunteer in Morocco in between earning bachelor’s and master’s degrees (the latter in Middle Eastern studies) at Harvard University. She said these humanitarian inklings—“inklings is exactly the right word”—“were not as blindingly clear to me as I lived my life as they might be to someone looking at my resume. A tendency was there that I groped my way back to.” And although no longer on the NPR payroll, she has talked and written extensively about her experience—for Fresh Air, transom.org. Frontline/World, Columbia Journalism Review and other outlets. Melissa Block interviewed her on All Things Considered in June for a story on aid workers killed by the Taliban in Afghanistan.

Tailor fits Chayes for man's garment.The daily life she has described in these accounts is of Spartan living conditions that are pleasing to her ascetic sensibility—a simple compound with intermittent electricity (and Internet service), surrounded by gardens and livestock, where she subsists on simple stews and luscious fresh fruits like pomegranates and dates. Beginning in her NPR war correspondent days, she chose to adopt the traditional dress of Afghan males, including a turban, rather than Western wear or a burka. Although the intent was to blend in, she turns heads wherever she goes in Kandahar. Her connections with the Afghan president’s family through Afghans for a Civil Society have provided her a degree of security in an environment still hostile to Westerners. She has learned to speak Pashtu, the regional dialect.

Chayes also unexpectedly found herself as a central figure in a documentary by independent filmmaker Brian Knappenberger, Life After War, that aired on the Sundance Channel. Frontline/World carried a half-hour version of the 75-minute film last year as A House for Haji Baba.
Knappenberger said he wanted to make a film about Afghanistan after Sept. 11. “I thought the news we were getting out of Afghanistan seemed fairly superficial to me. We didn’t know what people thought or felt there.”

Chayes was an aunt of a friend, and Knappenberger began to correspond with her by e-mail soon after her transition from reporter to relief worker. Although the heart of the story is the ACS’s rebuilding of the bombed-out village—and the group’s battles to secure building stone from the provincial governor, a warlord who has seized a local quarry so he can monopolize construction in the region—Chayes is the human face with whom Western audiences can identify.

“Here was this woman, a very brash American woman dressing like an Afghan male in Kandahar, and her ambitions for what she wanted to do there,” said Knappenberger. “There is this intelligence of spirit but at the same time a little naiveté of what she wanted to accomplish there. …Here she was bringing this great gift, but … the villagers had other ideas of what’s right for them. And that’s always the issue behind philanthropic work: Do you give people what you think they need or what they think they need?”

Chayes has written in detail on transom.org, the website for radio producers, about her work preparing to start up Afghan Independent Radio. A year after its launch, she told Current, “The radio has been absolutely a remarkable success. According to a recent listener poll, 74 percent of the people interviewed listened to it, compared to 52 percent for BBC. I think it’s really the first local independent radio in Afghanistan ever.”

Though she had the skills to start a radio station, she said, she was ironically the one who dragged her feet the most. “Partly because I knew what it took to get radio on the air. The non-radio professionals were gung-ho.”

Although grants from the Carr Foundation and others provided the equipment, the two-floor building with two soundproof studios was built from scratch, as was much of the furniture, Chayes said.

Chayes emphasized basic journalism in training the staff. “We would do an interview, cut it, and comment on it, working on everything from the angle of the microphone to the substance of the interview,” she said.

“While there is assistance in starting up broadcast media [in developing countries], the assistance is almost entirely technical—using the computers, the digital audio, minidisc machines, but there is very little training in journalism. How do you approach a story; how are you objective in a real way?” said Chayes. “We did a lot of work on that.”

The radio station is now being considered a model for others to emulate, and when she returns, Chayes will continue her mentor role with it.

Though she will continue to write and speak about her work, Chayes said she doubts that she will ever return to daily journalism, “where you parachute into a place, you don’t speak the language and grab an interpreter who has his own agenda. It leaves you very open to being deceived. ... It doesn’t give you time to subject the material to the scrutiny it needs.”

Understanding the country and its culture has required her to climb an enormous learning curve, she said. “One of the more pleasurable aspects of my life now is that I can take the time to come to a real understanding of something.”

This story has been posted in the following forums: : Headlines; COS - Afghanistan; COS - Morocco; Journalism; Service