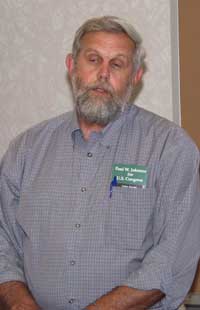 Paul Johnson, Democratic candidate for Iowa's Fourth Congressional District, said health care and foreign policy have dominated the campaign during a meeting Tuesday with the Alliance for Global Justice.

Johnson, flanked by his campaign manager and nephew Kirk Johnson, told the small group it was important that Americans have readily available and affordable ways to cover medical costs.

"This whole issue on health care boils down to the feeling of 'Do people need health care?'" he said. "Our president was talking in front of the United Nations about human rights. In most nations, that means health care."

In the United States, he said, there are more than 45 million people without any access to health care and many more with some form of health care that cannot afford prescription medicines.

Instead of the current system, he said, he was in favor of creating a single-payer health care system, such as that in Canada or Sweden.

One critic of the plan is Johnson's opponent, incumbent Rep. Tom Latham, R-Iowa. During a debate on Iowa Public Television on Sunday, Latham denounced Johnson's plan as a form of socialized medicine.

"I'm not going to socialize medicine, because we've seen what a disaster that can be," Latham said.

Another issue Johnson addressed Tuesday was the importance of foreign policy in the election and social volunteer programs such as the Peace Corps.

Johnson, a former Peace Corps volunteer, said such programs gave him a new understanding of how the world works, something he thinks most Americans lack.

Kirk Johnson explained his views on the flaws of current American foreign policy.

"If our role is to liberate peoples, then we are going to have a big problem finding the number of troops to do that," Kirk Johnson said. "If you use generic terms like that, like state-sponsored terrorism, or an oppressive regime, you can't tell me what country that is.

"We're looking at dozens of countries that meet that criteria."