Astronomer Sheldon Schafer was a Peace Corps volunteer in India, where he discovered an affinity for science education and for another volunteer, a New Yorker named Mary Ann Tesar, whom he later married 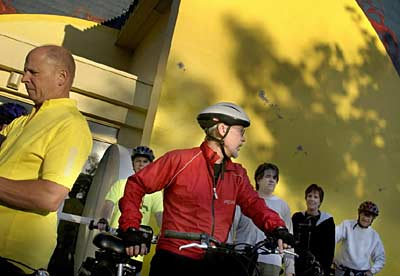 Astronomer Sheldon Schafer was a Peace Corps volunteer in India, where he discovered an affinity for science education and for another volunteer, a New Yorker named Mary Ann Tesar, whom he later married

Pedaling to Pluto
A trek across world's largest complete solar system model: Through cornfields and into stores at the 'speed of light'

Caption: Lakeview Museum Director of Science Programs Sheldon Schafer, center, talks to participants in the Peoria Solar System/History Bicycle Ride Sunday August 15 under the glow of the large sun painted on the side of the Peoria museum. (AP photo for the Tribune by David Zalaznik) Copyright © 2004, Chicago Tribune

PEORIA -- "Meet me at Neptune," said Sheldon Schafer. "Or ride the bus with me to Pluto."

The invitation was intriguing, coming as it did from the curator of the solar system.

The community solar system, that is, a set of sized-to-scale and carefully placed planet models extending as far as 40 miles from the sun, otherwise known as Peoria's Lakeview Museum of Arts and Sciences.

"It is the largest, complete model of the solar system in the world," said Lakeview's vice president of education and planetarium overseer, the down-to-earth Schafer ("Please call me Sheldon"). But he is planning an even bigger one that should silence any doubters.

And here was Sheldon asking whether I wanted to accompany him on the museum's 10th annual Interplanetary Bicycle Ride, a two-day trip in mid-August. Depending on paths taken, a worlds traveler might cover up to 16 billion miles of space -- or 125 miles of central Illinois.

The trip would be no sweat for a serious cyclist, but I had not covered any real distance on a bike in decades. I knew this would be a stern test and wasn't sure my stern was up to it.

But a brochure made the ride enticing. Consider the bragging rights, it said. "Who else can say they've cycled to Pluto?" And by pedaling faster than the speed of light (equal to about 7 miles an hour in this model), riders "will actually return younger than when they started."

As an astronomer and science educator, Sheldon Schafer bristled at popular depictions of the solar system as same-size planets in tight, neat circles about the sun. He wanted to construct a model with planet sizes and distances proportional to space's vast dimensions. He wanted his model to have good-size planets, so the distances would have to be significant.

He knew of other models in cities around the world, but he wanted his to be bigger and more scientifically accurate.

He finally got his opportunity in 1992, 16 years after he joined Lakeview as planetarium director. He proposed a model as a supplement to a big NASA traveling exhibit, and a local foundation gave the museum $10,000 for the show and model.

Sheldon set his scale by using the planetarium's 36-foot-diameter dome as the sun (later painted on an outer museum wall). A mile in his model equals 126 million miles in space.

He got a local firm to build Plexiglas planets -- ranging in diameter from three-fourths of an inch (Pluto) to nearly 4 feet (Jupiter) -- and an artist, Peoria's Walter Kinsman, to painstakingly paint the spheres.

Sheldon plotted orbital paths, and along each he found an area establishment glad to display a planet on its premises.

Lakeview spokeswoman Kathleen Woith said that over the years some models had to be moved as businesses got tired of them or moved away.

Today, for example, Mercury is in a camera store and Neptune in a car dealership. Earth, an insignificant 4 inches in diameter, is mounted, trophylike, at a gas station.

For some establishments, the planets have melted into the surroundings. A large, ringed Saturn hovers over the entrance of the Kroger in East Peoria. An assistant manager told me he had worked at the supermarket two years and never knew why it was there.

Some things I know about Sheldon Schafer: Born 56 years ago in Columbus, Ohio; studied astronomy there at Ohio State University; worked at a planetarium in Yonkers, N.Y., while getting a master's degree at Wagner College; between degrees he was a Peace Corps volunteer in India, where he discovered an affinity for science education and for another volunteer, a New Yorker named Mary Ann Tesar, whom he later married.

And he gets upset at having to replace the "You have reached the orbit of Uranus" sign he posts on a trail outside town. "It has been stolen twice," he said.

The first day of the ride, a Saturday, was a tour of the outer planets: Saturn, Uranus, Neptune and Pluto. The route was drawn away from busy roads, so we wouldn't visit the model's planets but hit alternative points in their orbits.

At the stand-in Saturn, in nearby Dunlap, an early-morning chill kept registration down, to 126 riders from the usual 150. Some would cycle to Pluto and back, or 100 miles. Sheldon, I and 10 others rode with our bikes on a shuttle bus north to Pluto, in Kewanee.

Many doubt little Pluto is a real planet. All I can say is that the sphere in a glass display case at Good's Furniture in Kewanee is not the original Kinsman. That was stolen years ago. Good's put a gumball in its place until Sheldon found out and ordered a replacement.

One of Sheldon's two daughters lent me her mountain bike -- a sturdy mount but too short for me. Other riders sped away, but Sheldon stayed as I fumbled through the gears. We left Kewanee and entered the Kuiper comet belt, hilly back roads along cornfields.

Sheldon suggested we leave the road and take a shortcut, the Rock Island Trail. We rode it nearly to Neptune, a rest and food stop at the historic rail depot in Wyoming.

There, the Peoria Astronomical Society had set up filtered telescopes so we could observe sunspots. Sheldon added some insights on the solar activity.

Chicago-born Jim Richerson is president and chief executive of the 41-year-old Lakeview, the largest private museum Downstate. Almost from his arrival there in 2000, he has worked on plans for a downtown museum complex that would house Lakeview and other cultural groups.

Last year, he said, Peoria designated a two-block blighted area near the Illinois River as the site of the planned Central Illinois Regional Museum. Caterpillar Inc., whose headquarters is nearby, is considering a building there for exhibits on its heavy-equipment business.

Richerson said the cultural complex could help revitalize the area. "Quality of life is very important to us," he said.

He expressed confidence that the $67 million needed will be raised and the complex will open by 2008.

Sheldon's sun will move 5 miles south to the new museum and expand along with the size of a new planetarium dome. So, Sheldon will have to reconstruct his model accordingly.

Sheldon and a student of his at Peoria's Bradley University, where he teaches astronomy part time, have been plotting a new model, using diameters of 50 to 55 feet for the sun.

Such a system would need bigger planets and could stretch as far as 50 miles from Peoria -- depending on where Sheldon situates that ornery Pluto. Its eccentric orbit at time puts it closer to the sun than Neptune.

Some solar system models built after Sheldon's have a larger-scale factor but are not as complete as his.

One in Stockholm extends 186 miles but is missing planets. The University of Maine at Presque Isle's model extends 40 miles along a road; Sheldon's radiates in all directions and is as wide as 55 miles across. Maine's is based on a solar diameter of 49.5 feet, but it has only an arc of the sun, not the full Sol.

"Their sun is lame," Sheldon said. He added that with his new model, "we'll make sure we beat Maine's" in scale factor.

A pause at Uranus, which for today's ride was Princeville, then Sheldon and I rode the final 6 miles to Saturn.

It was midafternoon when we arrived, but night was descending on me. I remember receiving a certificate attesting to my having traveled 5 billion miles -- 40 miles of terra firma.

Sleep and Advil restored me, but I decided not to bike with Sheldon and 14 others as they set out from the museum's sun early Sunday for a 25-mile, roundtrip tour of the inner planets.

I followed, sheepishly, in my car as they traversed the near-empty streets of this city of 113,000. They stopped at the business berths of Mercury, Venus, Earth and Mars, then headed for the giant Jupiter at Bradley. We passed mansions on Moss Avenue, built with 19th Century fortunes made in Peoria's liquor distilling heyday, and the Frank Lloyd Wright and Frank Lloyd Wrong homes (the latter a commission the great architect, in a huff, refused to complete). They swung across the river into East Peoria, past Cat plants and toward the supermarket Saturn.

I said goodbye to Sheldon, gassed up my car at Earth and headed for Chicago. I longed to feel its gravitational pull.

This story has been posted in the following forums: : Headlines; COS - India; Science; Astronomy