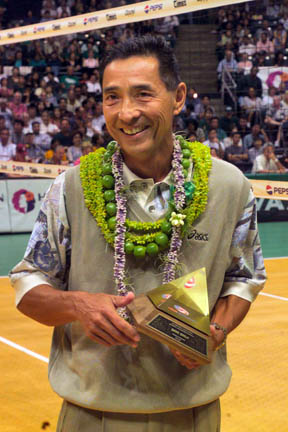 No looking back
Dave Shoji will coach his 1,000th
match tomorrow when Hawaii
takes on Pepperdine
By the numbers | Coach's picks

Longevity on a job says a lot.

Having longevity AND success says even more.


Dave Shoji's record says it all:

Tomorrow night against Pepperdine, Shoji reaches another milestone in his 30-year career with the Rainbow Wahine. It will be his 1,000th match, just the third Division I women's volleyball coach to do so at the same school.

Shoji has 1,000 memories to go along with those 1,000 matches. And just as many colleagues and former players who consider him a friend.

Shoji, a three-sport star in high school, didn't take up volleyball until he was a college freshman. Within two years, he was an All-American.

"I met Dave when he arrived at UCSB in 1965," said Minnesota coach Mike Hebert. "He came to play baseball. I was a senior and he was a freshman. We had some great battles against each other on the intramural-flag-football field at UCSB. He was the quarterback for Sigma Pi and I was a wide receiver for the Sig Eps.

"I remember when Dave first took up volleyball. He would sit around the gym, watch the veterans like me and Dennis Berg play and he wanted to learn. He would get his chance to play and everyone marveled at his jumping ability. He eventually became one of the best setters in UCSB history. He was a big-time player.

"It was a grand stroke of luck that the coaching profession brought us together again. I had been off to Nigeria in the Peace Corps, Dave had moved back to Hawaii. When I started coaching in 1976 (Pittsburgh) I read about Dave's early success. We rekindled our friendship and have stayed in touch ever since."

Hebert has taken three teams to the final four -- Illinois in 1987 and '88, Minnesota last year.

"The greatest treat for me has been the fact Dave's team has been there for all three," Hebert said.

Shoji is four points ahead of Penn State's Russ Rose in winning percentage (.845).

"It is both a testament to his sense of humor and his competitive streak that Dave has not only coached 1,000 games as the head coach of the Wahine, but that he has won close to 90 percent," said Rose, in his 26th season with the Nittany Lions. "More important though is that he has coached in a professional manner and mastered a style of play that has been used as a blueprint for many coaches.

"And I count myself as one."

The trademark of Wahine teams has been the defense. Shoji's stressing of that element has influenced many of his colleagues.

"I was Dave's assistant in 1981 for the Olympic Sports Festival," said Cal coach Rich Feller. "I got the basis of my overall defense philosophy from him that summer and have used it from then on."

"He feels defense is the heart and soul of the game," said UH assistant coach Kari Anderson Ambrozich, a setter for the Wahine from 1991 to 1994. "You can win if you can keep the ball alive and wear the opponent out.

"One of the greatest things about him is his willingness to evolve, to pick up things from coaches and colleagues. He is good about being open and open to change.

Shoji, a purist, eventually accepted rally scoring ... but it was a hard sell.

"He used to call me every time we lost in the fifth game using rally score because I voted for it and still believe in it," said USC coach Mick Haley. "That died with the movement to total rally.

"He's had a really great career and he will be hard to ever replace. He is Hawaii."

Shoji was Alan Kang's assistant in the Wahine's inaugural collegiate season of 1974. Hawaii finished second, losing to UCLA in the final.

"Dave and I go way back to the beginning of women's collegiate volleyball and Dave's teams were at the top right from the beginning," said Marilyn McReavy Nolen, the co-coach at Utah State in the 1970s. "The Hawaiian teams were always respected for outstanding defense, as they could come up with plays on what looked like a certain kill or ace. As recruiting became more and more a factor, Dave brought in some serious contenders while remaining true to the Hawaiian heritage.

"For several years our teams played home and away vs. each other as our two. Those matches were anything but calm. Both teams enjoyed the change of locale and weather, but the real fun started on the court. Emotions were running high. Fans got a real treat watching those battles."

One is the 1979 AIAW national championship match against the defending champion Aggies, in which Hawaii lost the first two games but rallied to win in five.

"He stated the players were so nervous they couldn't perform for two games," said McReavy, who retired last year from Saint Louis after accumulating 800 career wins at four schools. "He must have coaxed them through that because they came back to win.

"I certainly wish Dave continued success and send my sincere respect to a great man, now a living legend in the coaching world."

There are so many stories to tell.

According to Feller, then the Pacific assistant, Shoji was blamed for the power outage during Hurricane Iwa in 1982 that forced UH's matches against UOP at Blaisdell Arena to become a single match played at Klum Gym in a rolling blackout.

art
STAR-BULLETIN / 1988
Dave Shoji tops the list in winning percentage at .849 and is second behind UCLA's Andy Banachowski in total victories.

Stanford's Don Shaw remembers Shoji and then assistant Dean Nowack wearing matching aloha shirts during a match against Stanford. The next night when the Wahine played the Cardinal, Shaw and co-coach Fred Sturm "borrowed" aloha shirts from the Holiday Inn janitorial staff and wore them at Klum Gym.

Shaw is one of several coaches who have gone against Shoji in women's and men's matches. Shoji coached the Warriors for seven seasons, compiling an 81-48 record.

"We haven't gone up against each other in a long time," said UCSB men's coach Ken Preston. "There was one time when he was lamenting the fact that his (male) players would show up at practice with sand on their feet. I don't think he was too happy about that pre-practice routine and the difference between men and women."

Shoji's love is volleyball, but his passion is golf -- he plays to a 6 handicap. Many a time a visiting coach has ended up on the golf course after losing to, or beating, the Wahine.

"I'm looking forward to some golf with him in the offseason," said former UOP coach John Dunning, now at Stanford. "He's going to have to give me a few strokes, since I have not been playing much or very well.

"It's hard to believe Dave's that old (57). He looks 25. But, seriously, I think Dave is the best game-day coach in our sport. I obviously have enormous respect for him as a coach in a general sense, but specifically he deserves lots of credit for the outcome of matches his team plays because of his involvement during the matches."

"Dave has definitely influenced my coaching style," said Wallace, the assistant coach at Texas-San Antonio. "More than any other coach, I learned so much from him. Probably the biggest influence is game coaching. To this day I follow the game plan that he used while I was working for him. This includes detailed scouting report on each opponent, developing practices to defend their (offensive) tendencies and exploit their (defensive) weaknesses, and adjusting our game plan as needed during the match.

"Dave has incredible insight to the game. He never ceases to amaze me with his coaching. To top it all off he is the most humble coach I know. He has a great respect for opponents -- coaches and players alike -- and isn't afraid to show it."

When asked his thoughts on his 1,000th match, Shoji asked, "When is that? Saturday?"

Then he replied, "It's just a number."

One thousand and counting.

This story has been posted in the following forums: : Headlines; COS - Nigeria; Sports; Volleyball