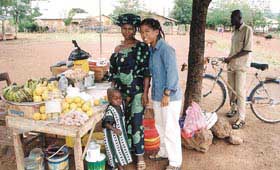 Editor's Note: Published on page C1 of the September 8, 2004 issue of the Philippine Daily Inquirer

A LOT of people born into the lap of comfort would be content to just enjoy a laidback and easy life.

But not Cristina Dela Rosa.

She abandoned her comfortable life in the United States for two years and found a new home in West Africa as a Peace Corps volunteer.

Born in Los Angeles to Filipino parents, hers was a happy childhood of good schools (she studied at Marymount, a reputable private Catholic school), piano and clarinet lessons and basketball games.

Passionate and zealous, Tina's drive to excel was evident early on.

She spent her college life at the University of California, Irvine, where she was part of the women's rowing team. Although she wanted to pursue her dreams of becoming a lawyer, she realized that she wasn't ready to plunge into post-graduate studies right after leaving the university.

Inspired by a friend

Peace Corps and left for East Africa to teach. She inspired me. I looked into it. After each thing I read, it just sounded better and better."

She spent a long time making her decision. "I'm gonna be selfish and say that I love to travel and see new things and try things out of the ordinary. I thought it was the perfect way to take a break, do something different, sharpen my language skills and dip my feet into the international sector and see how that feels for me."

But selfish isn't a word people would use to describe this twenty-five-year-old.

She has always been active in volunteer projects, tutoring inner city kids and working for At/Risk Youth, an organization that takes care of adolescent boys who are taken away from their parents because of neglect, child abuse and sexual abuse.

Given her background as a volunteer, her decision to apply for the Peace Corps shouldn't have been a surprise. In the beginning, her parents were apprehensive but Tina knew they would understand. After all, the giving spirit is alive in them as well. Her mom Becky, a nurse in the US, has projects of her own. "She is active in sending medical supplies to hospitals in the Philippines," her daughter says.

In her senior year at the university, she began her application. "I filled out a general application and sent that in. Then I set up an interview with the regional recruiter in Santa Monica, Los Angeles. He asked me about my job and volunteer experiences, why I wanted to go there, basically my whole life story," she recalls.

After the interview, the recruiter went through a file database from the Peace Corps Headquarters in Washington DC to nominate Tina for a position. "I was hoping to go to West Africa. I knew I could probably teach high school there," she says.

When she was nominated, Tina had to go through medical, dental and legal clearance. But that wasn't the hurdle. It was unfortunate that right after she sent her forms to Washington DC, the anthrax scare started. She had to resend everything. By the middle of January, her application was cleared. All she had to do was wait for the invitation to go overseas.


It came in April. Just eight days after receiving her degrees in Psychology and Sociology, at the age of 23, Tina began her journey. "I did as much research as I could on Guinea, I had to pack and say goodbye. It was really fast, almost too fast."

To many, the thought of packing for two years may sound like hell, but Tina had no problems leaving excesses behind. "You only need sandals and rubber shoes--that's all. You can get clothes there. I brought journals because I write a lot, I brought tapes and a Walkman, I brought a lot of pictures. It was mostly the pictures--it was important to show the people there my family and where I come from."

After her orientation in Philadelphia where she met 20 other Peace Corps volunteers who would leave with her, she was on her way to Guinea.

"It was raining really hard when we got there. Guinea is a very poor country, probably one of the poorest in the world. There's really no building maintenance, you see a lot of beggars on the streets. The whole setting was something I had never seen before--maybe just in a magazine. I was really wondering what I was getting myself into. I just couldn't say anything, I just stared."

Still, Tina took a head-on plunge into the training. "It took twelve weeks. Each person had to live with a host family. They helped you see the typical African lifestyle, they helped you get used to the food, helped you with the language."

Tina speaks French well but she soon realized that wasn't enough. "French is the national language but they have different dialects. I learned Pular. The best way to do it is throw yourself into a community," she says.

After the intensive training, that's exactly what she did.

"My assignment was in a little village called Fatako, which is eleven hours away from Conakry, the capital. I taught close to a hundred students--10th, 11th and 12th graders. I taught high school English grammar and conversation, I got them into writing."

But before she could actually begin teaching, she had to face another challenge. "One of my biggest problems was discipline. That was the barrier to getting things done. In the beginning, no one took me seriously. Discipline in the classroom was shot to hell. There were no other female teachers and I was the only one who wasn't African. The fact that I'm female and I'm short and that some of my students were older than me made a huge difference. I really had to figure out how I was gonna do it."

Tina had to get tough. "I figured I couldn't be nice anymore, I had to crack the whip. I had to raise my voice, I sent them out. It was really the only way to get any work done. They needed it to get into college--that was my responsibility. It worked."


Adjustments needed to be made outside the school too. "In the beginning, it was very lonely, I didn't know anybody. There was no electricity, no running water. To get to the closest big city to go to the bank, the post office, use the phone and go online if the Internet was working, I had to ride at the back of a truck. It was a cattle truck but it's the way people go. The four-hour ride was very uncomfortable."

Because of the difficult ride, she only took the trip once every four to six weeks. The rest of the time, she rode a bike to get to other nearby cities. "During weekends, I would ride 15 km to visit my other American friends who were also teaching," she said.

The bike also came in handy when Tina needed the luxury of a cold drink. "If I wanted a cold soda, I had to bike 20 km from my house to a place where they had generators. But it was worth it."

Despite the major changes, Tina remained strong and determined. She held on to the things that helped her get used to what she calls "basic living." "They found me a house next door to an old woman who lived with her fourteen-year-old granddaughter. She kind of became my mom there. She cooked lunch for me every day. It was nice to have someone there."

Her monthly phone conversations with her mom were essential. And in faraway Africa, getting in touch with her loved ones played an important role. "Writing letters was one of the things that got me through. I must have written two hundred letters."

Soon, Tina grew accustomed to her life in Guinea. "The best times were in the classroom. Getting to know the kids was good. Teaching was the best part because I really enjoyed it. If all else failed, the classroom was my domain. That's where I felt the most comfortable."

Her bed was a mattress on uneven planks and her toilet was not indoors, but she had grown used to life in Fatako. She spent her free time running, reading and writing. Days at Fatako ended early. "There's no point in staying up if you don't have light bulbs. I didn't want to waste candles so I'd be in bed by 8:30 or 9 if I was really tired."

In the friendly village, her ten-minute walk home from school stretched into two hours. "It's always nice to greet the market women who sit by the side of the road. I had to greet and chat with everybody."

Everyone knew Ms Tina, or Katija, as they called her outside the school. The women braided her hair. Little kids invaded her porch and she spent afternoons playing with them. "They were obsessed with crayons and coloring books."

She made good of her life in Guinea but it couldn't be denied that she also missed life in Los Angeles. "I missed my family. I also missed being anonymous. When you're in a village where everyone knows who you are, you just miss the privacy. I grew up in a big city and I missed that anonymity."

This story has been posted in the following forums: : Headlines; COS - Guinea; COS - Philippines