For the past year and a half, Meghan Driscoll has spent much of her time in the Kavola village health clinic in Uzbekistan 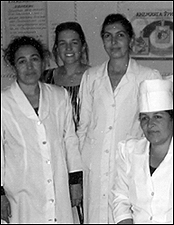 For the past year and a half, Meghan Driscoll has spent much of her time in the Kavola village health clinic in Uzbekistan

Getting a healthy dose of helping others

Caption: Peace Corps volunteer Meghan Driscoll, 25, second from left in the back row, joins her coworkers at a health clinic in Kavola, Uzbekistan. (Courtesy photo)

For the most part, the weather in Kavola echoes that of New England. But there are times when the Uzbekistan summer sees the mercury climb as high as 110 degrees and wintertime lows see temperatures sink below zero.

For the past year and a half, Oak Street resident Meghan Driscoll has spent much of her time in the Kavola village health clinic. Only one of the clinic rooms has heat and when the temperatures drop, patients huddle there to keep warm. The electricity works about 40 percent of the day. The clinic nurses proudly boast that they have a microscope but it doesn't work. They have a sink and a toilet but no running water.

"The conditions are surreal sometimes," says Driscoll, during a recent trip home to Beverly.

Driscoll, 25, is a Peace Corps volunteer. Her clinic, she explains as she flips through an album featuring snapshots of the facilities, is a rural outpost which serves a population of 1,600. Uzbekistan has a population of more than 35 million.

She has less than seven months left in her tour of duty - seven months to gather the remaining $2,000 needed to help open the doors to a new health clinic in the Kavola village, outside Bukhara, Uzbekistan.

"We take so much for granted it's amazing," says Driscoll. "These people have nothing but they don't despair."

"It was a hard time," Driscoll says. "We weren't sure what to do. Most of the Peace Corps paperwork was lost."

But the college grad stuck with her gut and re-filed the copious amounts of application materials, letters of recommendation and the like, needed to pass Peace Corps inspection.

"Really, though," Driscoll says, "it's not that bad. You just do it and move on."

Besides, she adds, the extra effort is important for both the Corps and the individual since "it is such a commitment on everyone's part."

Once accepted into the Corps, there's a long process of learning the particularities of the language, understanding cultural norms and behavior modifications that can mean the difference between understanding and the lack thereof.

"Without that training there's no way to communicate and if you can't communicate how are you supposed to help?" Driscoll says.

Driscoll could have gone into the Peace Corp to teach English. She could have been stationed at some school or other and spent her off hours hobnobbing with fellow Americans. Not that she doesn't do her fair share of traveling and hanging out with new friends she's made through the Corps, but when she enlisted Driscoll practically picked both location and vocation.

She'd taken Russian when she was a student at Beverly High School with teacher Lisa Chernyak. When she graduated, Driscoll headed to Union College where she studied foreign languages and political science. It was that experience which sent her to Uzbekistan, but it was the time she spent working for the state's Department of Public Health that pushed her into the health care field.

Roughly the size of California, Uzbekistan consists primarily of plains and desert. Bordered by Kazaekstan, Tajikstan, Turkministan and Afghanistan it is no wonder American armies base here. Freed from the confines of Union of Soviet Socialist Republic in 1991, the country nevertheless follows a theory of communist politics.

But Driscoll is comfortable here within the strange surroundings offered her by the Corps, her host family and the village clinic.

"They couldn't be more wonderful," she says. "I think that when I come home, that's what I'll miss the most the people and the friendships I've made here.

Building the foundation for a healthy community

"Some people have shown a great willingness to improve their community," says Driscoll. "These people [nurses] have kids of their own at home. They aren't getting paid and yet they come here. They have the foresight to realize that although this isn't going to give them more money it will give them and their families a better quality of life."

Driscoll, and the health care providers she works with, need a facility that had grounded electrical lines, hot and cold running water, heating units, sanitation, tiling and washable construction materials for the floors and walls. Only once all this is in place will the World Bank then concede to help the facility introduce new medical technology, education and additional staffing.

The clinic provides only basic, primary care for an otherwise impoverished area.

Aside from worrying about the elementary needs of heat of running water, Driscoll and the rest of the staff struggle with the primary reason for the clinic's existence - the health of the population.

"Things that we would never think of as problems are matters of huge health concern here," says Driscoll.

For example, tuberculosis or TB is prevalent throughout the region primarily because of poor medical supplies and lack of understanding among the residents.

"We may give them the medicine that will help stop the spread of the disease," Driscoll says, "but maybe they don't finish the medicines and the strains comes back, stronger than ever. The virus becomes resistant to the drugs. A new strain is born. We are on the verge of an outbreak that there's no cure for."

"There are so many basic things that locals simply don't understand about their own bodies," Driscoll says. "It doesn't matter how much money you throw into the medication... it's not going to benefit them without education."

Beverly residents have done their part to help Driscoll. When her mother Ann Driscoll mentioned her daughter's efforts to a friend, he brought the concern to the Beverly Hospital board of trustees which in turn led to an outpouring of support from various Northeast Health System related doctors.

In her request, Driscoll wrote: "Please do not discount any supplies as possible donations. We will be able to find a good use for anything and everything you are able to spare. Even if the equipment may seem outdated to American standards, it will still be superior to the clinic's current situation."

"Within 24 hours the news was in the hands of more than 50 doctors," says Ann Driscoll. And before left to return to Uzbekistan at the end of August the hospital teams had gathered nearly 20 boxes of medical supplies.

"The support we've seen from the local community has been wonderful," Driscoll says. "It's just an amazing opportunity and I'm really glad to be a part of it."

Well wishes may be sent to Driscoll in an e-mail at megjdriscoll@yahoo.com.

This story has been posted in the following forums: : Headlines; COS - Uzbekistan; Health Care