RPCV Allison Batdorf says "When I spent 27 months in Ukraine as a Peace Corps volunteer, I'd hitchhike two hours for a pizza." 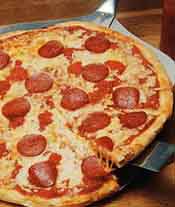 RPCV Allison Batdorf says "When I spent 27 months in Ukraine as a Peace Corps volunteer, I'd hitchhike two hours for a pizza."

My kitchen looked like a horror-movie murder scene. The white countertops were splotchy red with beet blood. Gory clots of beets, carrots and cabbage hung down from my cabinets like scraps from a massacre. As for me, I had fuschia fingers - caught red-handed in the act of making borscht.

I'd forgotten how labor-intensive a bowl of beet soup can be. Borscht is no two-minute meal. A good borscht takes two days and an infernal amount of grating, chopping, soaking and sauteing. But the pivotal ingredient to every Ukrainian meal is patience - my girlfriends used to write it on the recipes. "You'll need a double helping," they would tell me. "You Americans are always rushing."

Well, it had been five years since I departed Ukraine, and I had left my patience there. But 160 Ukrainians were about to descend on Cody, and there was going to be borscht, by God. I had to bring these members of the Kiev Symphony a taste of home. I could only imagine how homesick they might be.

When I spent 27 months in Ukraine as a Peace Corps volunteer, I'd hitchhike two hours for a pizza. Processed cheese in a cellophane wrapper brought tears to my eyes. I loved my time abroad, but a reminder of home was always welcome.

And now, Ukraine had returned to me, in the form of a line of musicians standing before my soup pot. My Ukrainian was so rusty at first that I felt that I was giving people aural tetanus.

Within minutes, the beet soup was gone in a mad dash that would rival a Communist bread line. Then the chatting began. At first, the Ukrainians were surprised to see this Amerikanka speaking the language of a western Ukrainian village girl. But they were touched, and treated me like one of their own.

Marta came up and hugged me. She was born in a village just a stone's throw from where I had lived and was thrilled to hear a familiar accent. When I told Gena how much I missed Ukraine, he painstakingly wrote down his Kiev address and contact information in English so I could come to visit his family. And after talking with Vassiliya for just 30 seconds, she took it upon herself to clean up my act by ripping off the scraggly ends of my weather-beaten purse.

It was almost like being there, except for the cowboy hats on the tables.

When I asked them about the current state of affairs, several people reminded me, "You know how it is. You were there. Life is hard. And nothing has changed since you left."

Yes, I remember. It was hard. Creative, intelligent people could find no work. The teachers at my school hadn't been paid for months. Older people and babies would die in the wintertime because they had no heat. Just about all those I knew were living off their gardens. The former prime minister was living in the United States after stealing millions of dollars from the country's treasury. The mafia, shaking down babusyas selling cigarettes on the street, was quickly becoming the preferred way of doing business, because the government was so inefficient. Folks were seriously questioning if independence was all it was cracked up to be.

In hard times, hope is quickly replaced by hate, and faith is usurped by fatalism. As a wide-eyed American idealist, hopelessness was much harder to abide than no running water or electricity.

Yet, "Moshna djevesh" - "You can live"- is a favorite saying among Ukrainians. You can live. You can work. You can tell anecdotes and laugh. You can dream of better days. You can make borscht and invite your loved ones to share it.

I thought of this as I looked at the borscht shrapnel coloring my kitchen. After dinner, I attended Kiev Symphony's concert. It was a tribute to Ukrainian independence. Throughout the performance, they reminded us that they were free - they weren't "The Ukraine" or "the breadbasket of Russia" anymore. They brought out the bendura, the Ukrainian national instrument, and sang folk songs in national dress. They also played American songs, their talents and accents making them their own. And when the string bass players threw on their sunglasses for a 9/11 tribute to "New York, New York," I could have cried, if I hadn't been laughing and clapping with the rest of the audience.

"You can live," they reminded us. You can make borscht. Even if it is messy.

Copyright © The Billings Gazette, a division of Lee Enterprises.

This story has been posted in the following forums: : Headlines; COS - Ukraine; Pizza; Humor