Christina Hedges first tried the hookah when she was serving in the Peace Corps in Togo, West Africa 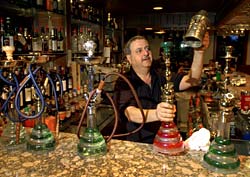 Christina Hedges first tried the hookah when she was serving in the Peace Corps in Togo, West Africa

Caption: Alex Khoury prepares a hookah at Khoury's Mediterranean Island at 1850 E. Broad Ripple Ave. Use of the pipe is traditionally known in the Middle East as a social activity. -- Matt Kryger / The Star


Tony Khal, a 53-year-old investment broker, is doing it.

Joe Ruesewald learned how to do it when he was studying at Indiana University.

Christina Hedges, a graduate student, and her mother, Laura Hedges Byram, do it.

What they're doing is hitting the hookah.

Also known as "narghila," "argeela," "shisha," "water pipe" or "hubble-bubble," a hookah is a pipe filled with flavored tobacco that is filtered by water and smoked, often before or after a meal.

The trend is now moving into some local restaurants that have set up hookah bars. Night crawlers are smoking flavored tobaccos at eateries in Indianapolis and Lafayette, as well as in Pittsburgh and Chicago.

"I do it about three times a week," said Khal, who was born in Lebanon and now lives in Westfield. He smokes at Khoury's Mediterranean Island, 1805 E. Broad Ripple Ave.

"In the Middle East, we usually smoked when we went to the mountain for dinner," he said.

Mina Khoury, who owns Khoury's with his brother, Alex, says "people who have been traveling to the Middle East come back here and they want to smoke the hookah."

Two years ago, the brothers introduced a hookah bar to complement a menu that includes lamb kabobs, taboule, gyros and imported lagers. For $15, guests can choose from more than 40 tobacco flavors -- sweet blends of fruit pulp, molasses and honey. Apple, strawberry and cola are among the favored choices.

Smokers must be at least 18; for first-timers, restaurant staff will explain the process. Hookah kits are sold at the restaurant, starting at $119.

"My uncle lived to be 98, and he smoked a hookah all his life. His last wish from his deathbed was to smoke the hookah," said Mina Khoury, who was born in Bethlehem and moved to the United States 37 years ago.

Most say the bubbling sound of the water pipe and the sweet aroma of the tobacco help to relieve stress.

"It's relaxing. You don't want to smoke it in a hurry," said Khal, whose favorite flavor is cappuccino. "There's an art to it. I have taken friends to dinner and everybody loved it."

Hookahs were first introduced as a popular social practice in India nearly 400 years ago, and quickly spread to Iran and the rest of the Middle East. Later, hookahs became part of the Turkish coffee shop culture.

Flavored tobacco is placed in the ceramic top of the pipe. As many as three people can smoke from one pipe, and the tobacco lasts about two hours.

Hedges, 25, first tried the hookah when she was serving in the Peace Corps in Togo, West Africa.

"There was a large Lebanese population there, and I dated a Lebanese man who introduced me to the hookah. It's different than typical smoking. They don't look at it like cigarettes," said Hedges, who owns a hookah given to her by a friend from Syria. Her mother, a dance teacher, recently tried the ritual.

While many restaurants throughout the country now ban smoking, hookah use remains popular -- especially in college communities.

College friends in Bloomington introduced Ruesewald, a data programmer, to the hookah. But it wasn't in a restaurant that Ruesewald first spotted the hookah. (A year ago, Monroe County passed an ordinance banning smoking in most public places; the ordinance will be fully implemented by January 2005.)

"I was passing a dorm and saw some guys smoking. I was intrigued so I went over and talked to them, and they explained the whole thing. It was a great bonding experience," said Ruesewald. "Over my four years at IU, I saw it catch on among a diverse group of people.

"There were no cultural boundaries when it came to the hookah," added Ruesewald, who does not smoke cigarettes. "It's not something you do all the time, and it's not addictive. One of the first questions people ask when they see it is if we're doing drugs. It's 100 percent legal."

Fadi Boulos, formerly of Chicago, opened "Hookah!" a Mediterranean restaurant in the trendy Chauncey Hill area of Lafayette in January. The restaurant serves a variety of rice dishes, pita sandwiches and appetizers. About 90 percent of the restaurant's customers are Purdue University students.

Boulos, 48, who grew up in Lebanon, said his mother, who smokes about once a month, introduced him to the hookah when he was 10.

A graduate of Northwestern University, Boulos said the hookah is a form of entertainment at his restaurant, which also offers belly dancers and a variety of Middle Eastern music.

Patrons can choose from 50 tobacco flavors, and Boulos offers something extra -- fruit hookahs filtering the tobacco through watermelon, cantaloupe and apples.

"We put the tobacco in a bowl on top of the fruit so the smoke goes from the bowl through the fruit and picks up the flavors of the fruit," said Boulos. "It's so rich. It's like eating the fruits."

Hookah etiquette
• Never pass the hookah directly to another person. Just put it down and allow the other person to pick it up. As a courtesy, turn the hose connection of the metal stem toward the next person.
• Never light a self-lighting charcoal on top of the hookah -- the extra smoke will overwhelm the tobacco flavors.
• Never share your plastic mouthpiece with another person, as it does not promote good hygiene.
• When you are finished smoking hookah, wrap the hookah hose around the metal stem.
Source: www.saharasmoke.com

Smoking dangers
Like those who smoke pipes, hookah users do not inhale the smoke, as is the case with cigarettes. However, that doesn't mean it's a safe practice.
The American Cancer Society released a study in June comparing 15,000 male pipe smokers to non-tobacco users. The report, written by Jane Henley, an American Cancer Society epidemiologist, indicates that pipe smokers have a greater risk of certain types of cancers and tobacco-related diseases than nonsmokers.
Henley said tobacco sellers attempt to make smoking seem more attractive by offering new flavors and pipes. "For example, in the last few years, hookah has been marketed as a trendy, fun and less hazardous alternative to cigarette smoking. The significant risks we found should leave no doubt that all tobacco products cause death and disease."

This story has been posted in the following forums: : Headlines; COS - Togo; Hookah