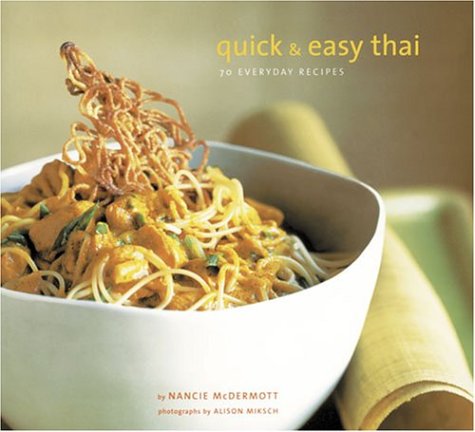 Match made in Thai heaven

Nancie McDermott learned about Thai food during three years as a Peace Corps volunteer teaching English in Thailand. By her own admission, she fell in love with the street food and palace cuisine she encountered. Her love affair continued, long-distance, when she returned to North Carolina. Like any besotted suitor, she went to mad lengths with good cheer to spend time with her beloved, and minded not a whit the hours she spent tracking down tools and ingredients.

By the time McDermott married and moved to southern California, the great influx of Southeast Asian immigrants and the markets they inspired there made pursuing her consuming passion for Thai foods much easier. In the following years, she began to teach Thai cooking, and wrote two cookbooks: "Real Thai: The Best of Thailand’s Regional Cooking" and "Real Vegetarian Thai." But the births of McDermott’s two children enlightened the new mom, she said.

"I began to understand the despair I had seen on some of my students’ faces as I presented a recipe with 23 ingredients and 19 steps," she writes in the introduction to "Quick & Easy Thai" (Chronicle Books, $18.95). "I gravitated toward dishes I could cook with one hand while the other hand held a telephone, a Raffi cassette (by the Canadian children’s entertainer) or a cookie."

Such is the difference between the idealism of the dreamy swain and the pragmatism of the happy parent. But pragmatism a la McDermott implies no compromise.

Instead, she collected 70 recipes for the kind of everyday meals that Thais eat at home, and encounter at the street vendors’ and night market stands. Here, too, are favorites from Thai restaurants, reproduced in home-kitchen proportion and technique. Where she found shortcuts for simpler versions of Thai classics, McDermott also included those.

"I wrote this book because I want to enjoy the dazzling flavors of Thai food even on a weeknight, to be able to cook Thai dishes as easily and happily and quickly as I make other favorite dishes for our table," McDermott writes.

Well, thank God for that.

Many of us have reveled in the pleasures of the Thai table, if only at restaurants. The lively, sensual pleasures of Thai food, with its complex mixes of sweet-hot-salty-sour flavors, refresh and intrigue even jaded palates. But cooking Thai at home, especially for the novice, has been intimidating. To cook that kind of Thai requires a pantry deep with specialty ingredients and a refrigerator chockablock with pricey perishables.

McDermott’s book makes it possible, however, to introduce Thai flavor profiles with easily found ingredients like fresh cilantro, chilies and limes. These recipes permit canned coconut milk and cream, rather than requiring the cook to start with coconut and hammer. McDermott thoughtfully includes mail-order sources too.

The recipes are well-written, easy to follow and quick to prepare; all three of the recipes we tried received raves from tasters. McDermott plays matchmaker with this book, cheerfully introducing you to a cuisine she suspects is just perfect for you. Later, if interest deepens and friendship turns to love, you may want to cement the relationship by exploring other, more scholarly cookbooks like McDermott’s earlier works and Su-Mei Yu’s spectacular classic, "Cracking the Coconut: Classic Thai Home Cooking."

Still, "Quick and Easy Thai" may become your closest Thai confidant and companion.

First dates are for fun, not forever. McDermott says that the Thai philosophy of food is "playful and varied, delicious and diverting, full of energy, surprises and wit."

"Seaside cafes all along the Gulf of Siam make hearty, delicious crab cakes with pork, garlic, and pepper. Fresh crabmeat is spectacular in this dish, but canned also works fine," writes Nancie McDermott in "Quick & Easy Thai." "Serve with a simple spicy sauce, such as sri rachaa sauce ...or mayonnaise spiked with either roasted chili paste (nahm prik pao) or red curry paste and chopped green onions." Asian markets sell cilantro with roots attached; if you can’t find it, substitute an equal measure of chopped stems and leaves.

1. In a small food processor or blender jar, combine the garlic, cilantro roots, water, fish sauce, soy sauce, salt and pepper and blend well until fairly smooth. In a medium bowl, combine the garlic-cilantro mixture with the crabmeat, pork, bread crumbs, cilantro leaves, and egg and mix gently. Shape the crabmeat mixture into 8 plump cakes, each about 3 inches in diameter.

2. Put the flour on a dinner plate, dip each crab cake in the flour to coat it lightly, and place it on a platter by the stove.

3. Heat the oil in a large skillet over medium-high heat for about 1 minute, until a pinch of flour sizzles at once. Add 4 cakes to the oil and fry, turning once, until golden brown and cooked through, 5 to 7 minutes. Drain well on paper towels, and then repeat with remaining cakes. Transfer the cakes to a serving platter and serve hot or warm.

This story has been posted in the following forums: : Headlines; COS - Thailand; Writing - Thailand; Food