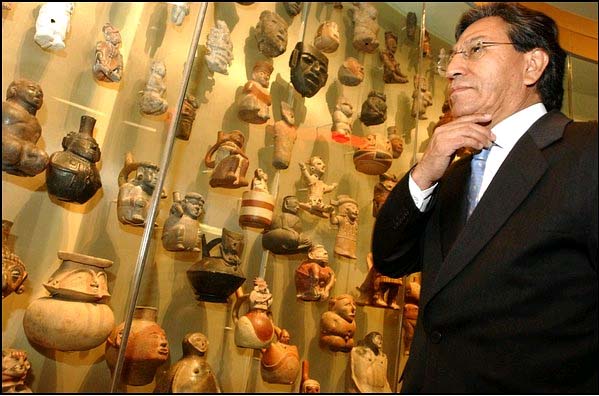 Indian museum is alive -- and working toward a brighter future

Caption: President Alejandro Toledo of Peru views some pre-Columbian art at the National Museum of the American Indian. (Jonathan Ernst For The Washington Post)

WASHINGTON -- I saw the sun come up over the Capitol the other day. It was the last day of summer, ideal weather, the kind of day some used to call "Indian summer." A friend of mine even spotted a pair of eagles flying over the Washington Mall.

This is a season finale, of sorts. But it's a different kind of equinox, marked by the grand opening of the Smithsonian's National Museum of the American Indian on the mall.

Thousands of Native Americans, representing some 400 tribes from North and South America, traveled to Washington for this festive beginning.

"Today, Native American tribes take their rightful place on the national mall in the shadow of the Capitol building itself," said Richard West, the museum's director and a member of the Cheyenne and Arapaho tribes of Oklahoma.

"History seems to stand still, silent in honor," West said, calling the hope for the museum "four centuries in the making."

Sen. Ben Nighthorse Campbell, R-Colo., a sponsor of the original legislation, said the museum is symbolic of an American Indian re-emergence. "The sacred hoop has been restored, the circle is complete," said Nighthorse, a Northern Cheyenne.

The president of Peru, Alejandro Toledo, said the understanding of indigenous people and issues is critical to the understanding of the Americas. Toledo is Andean, the first elected native leader in the hemisphere. He said cultural respect is an essential element for national stability, democracy and freedom.

At their best, museums tell stories. They show an artifact, a piece of jewelry or photograph. Those images, items and people are frozen in time. They represent a past, perhaps something forgotten. But the challenge of an American Indian museum is to do more. It must change the story, not just reflect the past.

Sen. Daniel Inouye, D-Hawaii, said he first understood the importance of the native story when he read about the Smithsonian's collection of some 18,000 Native American skulls and other human remains. "I went to see it for myself," he recalled. "There in neatly arranged green boxes were the remains." These remains were collected on battlefields or from desecrated graves.

"How would Irish Americans or Japanese Americans react if their ancestors were in green boxes?" Inouye asked. "Long after the Indian wars, Indian people were still arranged in green boxes."

But the warehouse of human remains fit America's national mythology in one way because the story so often told identified the American Indian as an "obstacle" to progress. Some tribal people were removed to distant lands. Others were killed in such great numbers that their very presence in a particular place was erased.

The news media told this story often. One 19th-century Northwest newspaper editorial called for a treaty council, followed by a grand feast. "Then just before the big feast, put strychnine in their meat and poison to the death the last mother's son of them," the newspaper said.

A less lethal version of this story was the directive from many government or mission-run boarding schools to "save the child," by killing the Indian.

The story of conquest -- or the American Indian as an obstacle -- was told alongside the story of the noble savage. This story has its roots in popular fiction of the 19th century. But versions of this story have been amplified by Buffalo Bill Cody's Wild West show, television and movies. The Wild West show retold Cody's fanciful accounts of a pristine native world destroyed.

The significance of the National Museum of the American Indian is that it challenges these worn-out narratives. American Indians are not forgotten, displaced or dead. The people are here. There is a future for Indian Country -- and it's a path that's woven into the stories about the future of the United States.

The name "National Museum of the American Indian" is almost a misnomer in that sense.

The stories are from the Americas, not just the United States. The stories are plural, reflecting a diversity of cultures from the Arctic shores to the tip of South America. The stories will be specific, told by the very people that most museums purport to represent.

In that sense, Washington is the ideal spot for such a museum. Since its first days as a capital city, American Indian leaders have been going back and forth to conduct business.

I remember my grandmother showing me a picture when I was a child. It was a photograph of father, wearing a stylish suit. The U.S. Capitol was in the background. The year was 1908.

My grandmother showed the picture -- and told the story of how her father, an Assiniboine tribal leader, viewed Washington and how tribes needed to succeed there for their people back home.

The museum story of American Indians should be told in a future tense, not just a frozen past.

NMAI director West put it this way at the grand opening when he said we must insist that Native American culture "is alive" and the museum will "use the voices of Native people themselves in telling that story."

That insistence, he said, goes beyond Native America, because the first Americans are a part of the "cultural future of America."

The future narrative of Native America is the most important role for the new museum. But the museum's opening already missed one part of that story. The entire grand opening platform presentation was about the role of men in starting the new museum (with the exception of a woman who chaired a board that donated a huge collection).

Indian Country's past, present and future needs to include the extraordinary contributions of American Indian women. The first staged story of NMAI did not do this: It was a story told by and about senators, big donors and other powerful players. But the efforts of many -- especially women working in staff jobs or with intertribal organizations -- made this museum happen, too. Even the design of the museum, including the habitat and crops, invokes images of a home.

Suzan Shown Harjo, a citizen of the Cheyenne and Arapaho Tribe of Oklahoma, along with George Horse Capture, a member of the Gros Ventre Tribe of Montana, opened the public doors to the museum for the first time after the ceremony.

"This is the way it should be," Harjo said, a balance between male and female.

Earlier in the day, she said, she saw a pair of eagles flying over the mall, male and female. "That was the right way."

That is the right way to open a museum -- and more important, it's the right way to shift the narrative going forward. This is a new story for the country, a story of hope, of complexity, and of the future. It's also a story of less conflict, success and a shared journey. This is an Americas story -- and an Indian summer story.

This story has been posted in the following forums: : Headlines; COS - Peru; Native American Issues