Gov. Jim Doyle has set a goal of generating 10 percent of total state power from renewable sources by 2015 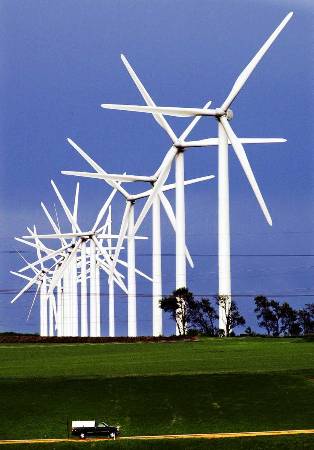 Gov. Jim Doyle has set a goal of generating 10 percent of total state power from renewable sources by 2015

Caption: Alliant Energy, which gets 30 megawatts from this wind farm in Iowa County, will add 230 megawatts of wind generation with a boost from new tax credits. (FILE PHOTO)

The credits, which are popular on both sides of the political aisle, expired at the end of last year after the overall energy bill failed to pass Congress. After a variety of efforts, supporters finally ended up attaching them to the family tax cut bill.

The tax credits, which were restored retroactive to Jan. 1 and through the end of 2005, put wind power on a "level playing field" with other energy resources and have helped foster development of wind power technology, said Frank Greb, Alliant Energy general manager of wind business development.

Madison-based Alliant said it now will move forward with plans to add 230 megawatts of wind generation that had been stalled by the demise of the credits. Alliant already gets 30 megawatts from the Montfort wind farm in Iowa County.

Alliant also hopes to benefit as other utilities move forward with wind projects, since Alliant's WindConnect division is a major designer, engineer and constructor of the electrical infrastructure for wind power facilities.
Advertisement:
The Phantom of the Opera at Overture Hall Jan. 5-30

"All of the state's utilities had a number of wind projects on the drawing board, and the story is the same across the country," Greb said. "I would say nearly all wind projects were at a standstill because this bill was languishing. I think uncertainty was worse than the bill not passing: business needs a certain degree of certainty to make investment decisions and people were waiting."

Greb said extending the credits another year or two beyond 2005 would provide an even stronger boost.

"I believe we'll see fairly robust growth in the wind industry through the end of 2005, but it would be a substantial benefit to extend another year or two," he said. "People are thrilled (the credits) finally made it through but another year or two would really bring wind into the forefront across the United States."

The Citizens Utility Board also welcomed the restoration and extension of the tax credits.

"We're very supportive of wind but we still want to know how much, where and why," Higley said. "They may not be building enough wind. They could do more wind and less coal. We want more information on all their proposals so we can determine what the best mix is."

Alliant announced earlier this year that it was requesting proposals for 100 megawatts of wind power in Wisconsin and 130 in Iowa.

"We're very confident that when announcements are made (CUB) should be pleased," Greb said. "The projects will be cost effective and environmentally responsible."

At the end of 2003, Alliant already was providing its customers with nearly seven percent of the total wind capacity in the United States.

Madison Gas and Electric Co. also welcomed the extension of the tax credits.

The project, which could be on line next year, will provide enough electricity to supply about 14,000 homes annually. And it means nearly 5 percent of MGE's annual energy demand can be met with Wisconsin-based renewable energy sources.

An affiliate of Chicago-based Invenergy Wind LLC will build and operate the proposed Dodge County facility, which also would supply 20 megawatts to Wisconsin Public Power Inc. of Sun Prairie.

MGE made the deal independent of the fate of the tax credits, but the company said tax credits reduce the cost of the power by nearly one-third.

"The credits will encourage more wind generation and keep the clean, renewable energy competitive with other traditional sources of power," said Greg Bollom, MGE assistant vice president of energy planning. "Additionally, our representatives in Washington have shown a strong commitment to the environment and the future of alternative energy projects."

This story has been posted in the following forums: : Headlines; COS - Tunisia; Politics; Energy; Renewable Energy; Wind Power