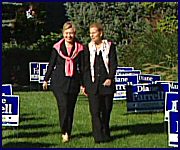 (WTNH, Oct. 3, 2004 10:00 PM ) _ Election day is now less than a month away and while many eyes are on the presidential candidates, a Connecticut candidate running for Congress is getting support from U.S. senator from New York.

New York Senator Hillary Rodham Clinton joined Westport First Selectwoman Diane Farrell at a private residence in her hometown to give her a boost in a tight race for US Congress.

Clinton says,"It is a close race for a good reason there is a great candidate running for the Democratic party."

Clinton says,"We have a choice here between an independent effective representative and someone who has increasingly voted with the extreme right wing agenda of Tom Delay and Dennis Hastert in the House which is not good for New York and not good for Connecticut."

Congressman Chris Shays says,"Well first off I don't represent New York. I do care deeply about New York City. Bottom line, I vote each issue on its merit and what's interesting is this is an old argument without specifics about what I voted."

Representative Shays says he votes independently because the people in his district are independent but Diane Farrell claims he's out of step with the fourth district, which includes most of Fairfield County. Her charges are answered by Rep. Shays.

Diane Farrell says,"Voted for no child left behind, did not support the funding."

Shays says,"We're spending 40 percent more then we did just 4 years ago. In my book that's a significant increase."

Diane Farrell says"Voted for every one of these budgets that took us from the $5.6 surplus 4 years ago to a $2.7 projected deficit in just 4 years time."

The economy of Farrell's campaign improved today. 600 people showed up at the fundraiser, bringing in more than $100,000 to her campaign. Representative Shays also has some powerful supporters.

On Columbus day, Senator John McCain will hold town hall style meeting with shays in Westport about the 9/11 commission's report.

This story has been posted in the following forums: : Headlines; COS - Fiji; Politics; Election2004 - Shays; Congress