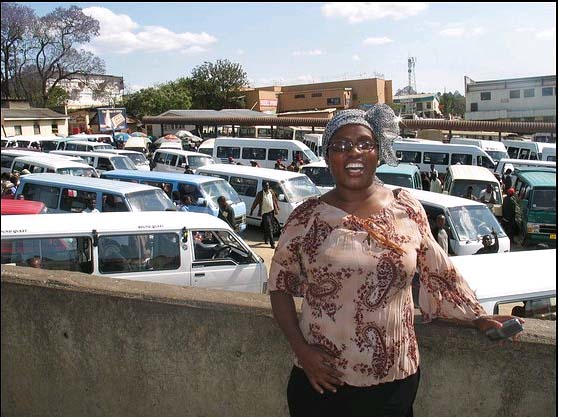 
Caption: Pressed by her 18-year-old daughter, Gugu Pungwayo helped organize a protest at the taxi depot in Manzini, Swaziland, where another 18-year-old was assaulted for wearing a miniskirt.
camera works Photo Credit: Craig Timberg -- The Washington Post


MANZINI, Swaziland -- Gugu Pungwayo couldn't bear to read the newspaper article. She recalled that she glanced at the headline, then put the paper down. Picked it up again. Put it down. Again. And again.

An 18-year-old woman had been sexually assaulted last month, brutally and repeatedly, by a gang of young men who worked at the chaotic, fume-choked taxi depot a couple of blocks from Pungwayo's office. The reason the men gave for the attack: The young woman was wearing a miniskirt.

By the time Pungwayo finished reading the article in the Times of Swaziland, she was crying, she later recalled. Her daughter -- age 18 like the victim -- demanded: "Mama, what are you going to do about this?" Pungwayo said.

Over the next few weeks, Pungwayo answered that question by helping to organize the first-ever women's march in Swaziland, a mountain kingdom of 1.2 million people. She also successfully lobbied for police and other authorities to take action. Three men have been arrested, but the activists are pressing for dozens more to be charged.

Fueling the outrage of activists such as Pungwayo is their conviction that the traditional subjugation of women is one reason that Swaziland has an HIV infection rate of nearly 40 percent, the highest in the world. Their protests of the assault have initiated uncommonly passionate public debate over what it means to be Swazi in the age of AIDS.

"We are losing the battle against HIV if we sit and allow this," said Pungwayo, 40, a union activist with a bright smile and sleek tortoise-shell glasses. "It's not a matter of short skirts."

Swaziland, a tiny landlocked country surrounded almost entirely by South Africa, is ruled by sub-Saharan Africa's last absolute monarch, King Mswati III. Political parties have been illegal since 1973. Women are regarded as distinctly subordinate to men. Married women cannot own land in rural areas, for example. And each year the king selects a new bride at a ceremony featuring thousands of dancing, topless virgins.

Many women say they lack the power to refuse sexual advances, and if they request that a condom be used to protect against HIV, their husbands or boyfriends accuse them of being unfaithful. Sexual assaults, by both acquaintances and strangers, have also increased.

"Most of the time," said Gcebile Ndlovu of the International Community of Women Living with HIV/AIDS, "it's up to the men to make the choices, as to the how, the when and the where."

The victim of the attack at the taxi depot here was from Mbabane, the capital, a quaintly formal town where full-length dresses and three-piece suits are common. Manzini, a city of 100,000, is the country's bustling industrial center, with factories that attract men and women from rugged mountain villages where traditional ways dominate. Young men from these areas run the taxi depot, which is little more than an oversize parking lot where hundreds of passengers are directed in and out of dozens of vehicles.

Several of the taxi conductors said that a grown woman should cover her legs. Anything less, they say, is un-Swazi.

A conductor, 16-year-old Kati Tsela, said, "When they wear those short things, they want us to buy. They are advertising."

The men at the taxi depot traditionally have whistled and shouted at women wearing what they consider improper clothing. The attack last month started that way, according to witnesses.

A group of about 20 conductors ripped the denim miniskirt from the girl's body, as well as her sleeveless top and underwear, witnesses said. The men assaulted her with their fingers and a scrub brush used to clean the ramshackle minibuses that serve as taxis throughout southern Africa.

A bystander ended the attack after about 15 minutes by wrapping the girl in a piece of cloth and putting her in a taxi that was driven to a police station, witnesses said. She was then taken to a hospital and treated for serious bleeding.

The day the article appeared in the newspaper, Pungwayo recalled, she and other activists started making urgent phone calls to one another. Pungwayo also called the prime minister -- who is the brother of her ex-husband -- at home. He issued a statement condemning the attack.

The makeshift group of activists met in person two days later to organize the march, which they publicized by phone, fax and text messages from their cell phones. And two days after that, the women started marching toward the taxi depot. Organizers estimate their crowd exceeded 1,000, a number that included hundreds of female students led by their teachers from nearby schools.

"We're fed up. Enough is enough," said Doo Aphane of the Women's Legal Rights Initiative, another organizer of the march. "The powers that be have realized that women are angry."

But at the taxi depot, hundreds of drivers and conductors had what amounted to a counter-protest with placards of their own, including one that, according to one news report, threatened more attacks, saying, "We'll get them with our brushes."

Dozens of women, mostly vendors who sell fruit and vegetables by the taxi depot, joined in the protest -- on the side of the conductors. Together, they blocked the entrance to the depot, forcing the women's march to stay on an adjacent street, according to the reports.

There was more backlash elsewhere.

A member of Swaziland's Parliament, whose every action is subject to approval by the king, made a speech criticizing what the press here has dubbed the "miniskirt march."

"We are tired of this. There should be a law against public indecency which would ban the wearing of anything that would expose a woman's thighs, her navel and also the wearing of G-strings," Ernest Dlamini said to rounds of applause, according to the Times of Swaziland.

One day last week, the newspaper ran 19 letters about the miniskirt controversy, seven of which supported the taxi conductors or criticized the victim of their attack.

"It is public indecency to show your underwear!" read one. "This is what promotes immoral behavior in all age groups. HIV is real and you tell me how we are going to fight it?"

Pungwayo said the activists have scheduled another protest for Saturday. They are also preparing other actions, including civil lawsuits against the conductors and a boycott of taxis unless owners create a code of conduct and institute rigorous training for conductors and drivers.

But the bluster has died down among the conductors, whose friends and colleagues are suddenly facing the possibility of jail time.

Many interviewed at the depot maintained that the victim violated something quintessentially Swazi in wearing a miniskirt. But most agreed that the attack went too far.

"This thing," said 21-year-old taxi driver Mugabe Mabuza, "it would not happen today."

This story has been posted in the following forums: : Headlines; COS - Swaziland; Women's Issues;