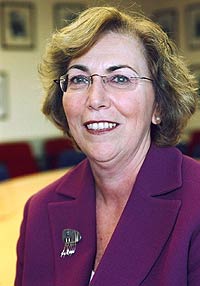 MCC board names a new president

MIDDLESEX COUNTY: Middlesex County College officials named Joann La Perla-Morales as the college's new president after a unanimous vote last night by the board of trustees.

La Perla-Morales will be paid an annual salary of $147,000. She has previously served as dean of instruction at Nassau Community College and associate dean for academic affairs at Bloomfield College. She has also held administrative posts at Union County College and Montclair State University.

"I'm at heart an ESL teacher," La Perla-Morales said. "I know all the issues of students who come to an institution with English not as their first language."

La Perla-Morales called community colleges "the most exciting, dynamic area of higher education," and said, as president, she hopes to reaffirm the college's mission to support student success.

"We really need to take a look at the way students are moving through the curriculum at the college and make sure they are moving along toward graduation," La Perla-Morales said. "The retention and graduation rate at community colleges is a nationwide issue, so much of the focus is to support students through their studies."

She could potentially begin her term in the midst of a contract dispute between college faculty and administration.

Faculty contracts expired June 30, and negotiations have been ongoing since March. In September, faculty members of Local 1940 of the American Federation of Teachers voted to authorize a strike if contract negotiations remained stalled. Union members also voted to suspend all voluntary services.

La Perla-Morales said she hoped an agreement could be reached before she took office.

"I certainly hope both sides will come to an agreement soon because that would be in the best interest of all parties," La Perla-Morales said. "If that does not happen, I would just have to consider that as the first thing I'd need to do in my role."

Patricia Payne, president of the faculty union, weighed in on how a new president could affect negotiations:

"It's hard to say at this point whether it would be a positive or a negative," Payne said. "I can't imagine it would make it any easier."

College spokesman Tom Peterson declined to comment on negotiations, except to say, "Negotiations are continuing, we're trying to get them done as quickly and fairly as possible."

This story has been posted in the following forums: : Headlines; COS - Colombia; University Administration