Though Amy Smith has displayed an inventive imagination since childhood, it was only after four years as a Peace Corps volunteer in Botswana that she found her true calling 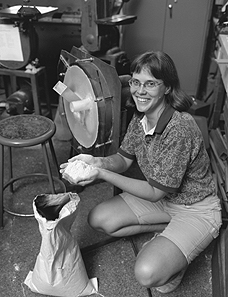 Though Amy Smith has displayed an inventive imagination since childhood, it was only after four years as a Peace Corps volunteer in Botswana that she found her true calling

A MacGyver for the Third World
KARI LYNN DEAN

AN engineer who is uninterested in advancing technologies is, to put it mildly, a rarity.

So rare, in fact, that the MacArthur Foundation awarded one such engineer with US$500 000.

Her award-winning feat? Using old technology in fresh ways to improve the lives of entire communities.

The MacArthur committee seeks dedication to original, creative pursuits that could affect the future.

Smith has a stable of old-fangled technologies that she has reconfigured and applied to underdeveloped areas around the world.

Her solutions -- including new grain-processing techniques, alternative cooking fuels and water-quality tests -- sound like answers to problems that should have been solved a century ago.

To Smith, that's the point.

"Looking at things from a more basic level, you can come up with a more direct solution, and a lot of people go well, duh, that's really obvious!" Smith said.

"But that's what you want:people saying it should have been done that way all along.

It may sound small in theory, but in practice it can change entire economies."

Alternative fuels are one way to cultivate that change.

The first method she developed after visiting Haiti was simple:First, the juice is squeezed from the widely grown sugar cane.

Next, the remaining fibres, called bagasse, are sealed inside a 55-gallon drum.

After the bagasse carbonises from lack of oxygen, it is combined with a cassava-root porridge to bind it.

Voilà:charcoal that can be used to cook, and manufactured as a business enterprise.

This new charcoal source can save lives in Haiti, where thousands die annually from massive flooding associated with the country's almost total deforestation.

Until Smith began developing this alternative source of charcoal, Haitians had been forced to use trees as their sole source of cooking fuel.

Smith hopes other countries will benefit from local variations on her charcoal production method.

"We are adapting it for India, where the problem is the use of cow dung for cooking fuel," Smith said.

"It's so abundant, but it also produces a lot of smoke.

Breathing indoor cooking fumes is the No 1 cause of children's death in the world.

So if you can produce a cleaner-burning fuel, then you impact public health and the environment, as well."

The next phase for Smith and her graduate-student team is to create a press to improve the briquette's density.

She expects it to be simply designed and created with the local environs in mind -- something akin to the grain mill she also produced, which reduces the daily labour of grinding grain from four hours to just a few minutes.

Smith has said that a motorised hammer mill could grind grain into flour in a minute, but its flour screen is expensive and usually can't be built locally in rural areas.

So last month she built a screenless mill prototype for one-fourth the cost of a conventional mill.

"A lot of people look at where technology is right now and start from there, instead of looking at the absolute functionality," Smith said.

"If you go back to the most basic principles, you can eliminate complexity.

The stuff I do is just very simple solutions to things, which is critical when you are developing applications for the third world."

Smith and her students have worked on an array of simple solutions to basic problems in the underdeveloped regions of the world:a water-testing kit that costs US$20 instead of the usual US$1 000, a phase-change incubator that tests for micro organisms in water supplies, peanut shellers and early-warning systems for flooding.

Shawn Frayne, one of Smith's former engineering students, likes a solution to a water problem that was making people ill in Honduras.

"A village in Honduras was getting over-chlorinated water because their chlorination tank did not have a way of controlling the flow of chlorine into the stream water," Frayne said.

"So, Amy and her students solved the problem using the parts of a toilet tank.

That's not a connection most people would make.

"The coolest thing is, she solved it on the spot.

What's more, her solution not only works, but it is something that can easily be understood and repaired by people in that village, which means that it can be kept functioning long after Amy and her students have left," Frayne said.

Smith is now on a mission to bring her ideas to more people both inside and outside MIT.

She hopes her affiliation with MIT will lend credence to the idea that innovating with the very basics of technology can effect major change in the world.

Her half-million-dollar fellowship should help with that, too.

"I've always wanted to have funding to help the people with good ideas who I see and think, 'If only they had the resources, they could do this cool project'," Smith said.

"I'd like to use a significant portion of the money to enable people who have the potential to make a significant impact in places like Haiti and India, the ability to just say, 'Hey, that sounds good, lets do it'."

African experience the turning point Though Smith has displayed an inventive imagination since childhood, it was only after four years as a Peace Corps volunteer in Botswana that she found her true calling.

Struck by the fact that "the most needy are often the least empowered to invent solutions to their problems", Smith decided to apply her engineering and design skills to invent low-tech devices with appropriate technologies for use in developing countries.