After 19 years, Kenya RPCV James Cloutier draws a modern version of his poster map of Eugene 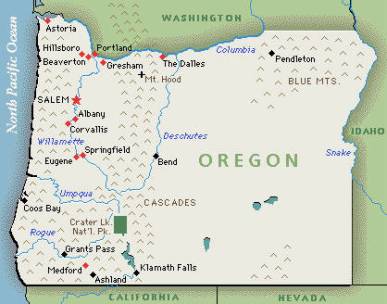 After 19 years, Kenya RPCV James Cloutier draws a modern version of his poster map of Eugene

After 19 years, University alumnus James Cloutier draws a modern version of his poster map of Eugene

The Eugene Poster Map is famous around town for its pen and watercolor depictions of local businesses and landmarks. That the map is covered with little ducks should not be a surprise, since map artist James Cloutier first came to Eugene to attend the University.

Cloutier was born in Portland, but has lived in Eugene since 1958, when he started his freshman year at the University. He attended the University on a baseball scholarship and served as the student body vice president in 1962. However, art was always his academic focus. "I knew when I was about ten years old I was going to be an artist," he said. "I also did a lot of art while I was here -- I was doing cartooning."

After obtaining his undergraduate degree in art, Cloutier spent two years in Kenya as a Peace Corps volunteer. While he was there, he painted watercolor pictures of Kenyan people and photographed wildlife. When he returned to the University for graduate school, he was given the opportunity to do a one-person show of his paintings and photographs at the EMU. When he learned that it would cost him an exorbitant amount of money to have eight by 10-inch prints of his photographs made for the show, Cloutier resolved to learn to print his own photographs. He took a photography class and got a C because he spent too much time in the darkroom making prints and not enough time taking photographs, he said. That winter, he took the photography class again and changed his major from painting to photography.

At that time, photography was exclusively the domain of the journalism school and not the art department. However, before Cloutier graduated, the dean of journalism and the dean of art met and agreed to let Cloutier and one other student get Master of Fine Arts degrees in photography, rather than the masters in journalism degrees that they would have otherwise received. They were the first photography students to earn MFA degrees at the University. Cloutier's masters thesis is still in the library, a photo-documentary that he spent a year and a half making about the tiny town of Alpine, located between Eugene and Corvallis. Cloutier entered the publishing business in 1977 and made books and greeting cards featuring his cartoons. However, his big break came in 1985 when he was commissioned to make the first Eugene Poster Map by a small company that a friend of his worked for.

"They gave me a list of all the businesses and I had to go out and photograph all the businesses," he said. After churning out the map under the tight deadline of six to eight weeks and enjoying its success, Cloutier spent the next decade and a half doing freelance art.

Then, about two years ago, a customer at Capper's Frame Shop in downtown Eugene asked an employee about obtaining a copy of Cloutier's old poster map. The employee, who was a friend of Cloutier's, passed along the question to Cloutier. Cloutier told him that there were no copies of the old map left and not even he had one.

"His response was, 'Why don't you do a new one?' which was easy for him to say," Cloutier said. To make a new map, Cloutier needed to see a copy of his old map for inspiration. He convinced Register-Guard columnist Bob Welch to print a plea in his column, which yielded one call -- a young man with a different Eugene poster map produced in 1988 by David Funk. Cloutier then found some photos that his brother took of him working on the old map. "I looked at these businesses up close, and a lot of them had moved, but Bradford's Hi-Fidelity was still downtown, so I called them up," Cloutier said. "They said, 'Oh yeah, we've got one in the bathroom.'" The business of mapping Once ready to start his new map, Cloutier began recruiting local businesses to fill it. Businesses bought a spot on the map plus twenty copies for $149. Some non-profit organizations were invited to participate at no charge or at a discounted rate. While he expected 75 to 100 businesses to sign on, similar to the original map's 75 businesses, he got over 300. "Seven out of ten businesses I called on signed up," he said.

"The primary criteria was that they were a business that's locally owned," Cloutier said. Only one or two franchises were included, he said, and he also looked for businesses that are of historical significance or tend to remind people of Eugene.

"I was also interested in businesses that had interesting logos," he added.

In addition to the local shops, the map includes various secret references. The little airplane with the pilot shouting, "Go Beavs!" should not be interpreted as treason towards Cloutier's alma mater, but as a greeting to Cloutier's brother's stepson, who went to Oregon State University and is now an Air Force pilot. The poker hand on the east edge of the map is a shout-out to Cloutier's poker group that meets every other Wednesday. Cloutier included himself as the duck pitching a baseball on the South Eugene High School athletic fields.

Over the summer, when Cloutier worked on the map, he often stopped at the University Bookstore to buy supplies. Every time he went to the store, a bookstore employee named Fred asked him, "Am I on the map yet?"

Finally, Fred was granted his wish -- he appeared on the map as a duck with a T-shirt saying "Fred," and was depicted joking around with a duck in a doctor outfit who was represented Cloutier's urologist.

Now that Cloutier is less busy after the completion of his map, he has time to consider future projects.

"When I finished this map a year and a half after I started, I vowed I'd never do another map, but unfortunately it made me some money, and I need some money, so I'm thinking about doing a map of Cottage Grove," Cloutier said.
Eva Sylwester is a freelance reporter for the Daily Emerald

This story has been posted in the following forums: : Headlines; COS - Kenya; Art; Photography; Maps