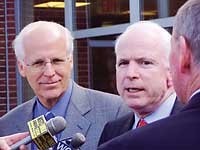 The pair are on a campaign tour of the district to rally support for Shays four days before voters will decide to either send him back to Washington for his 18th year, or elect his challenger, Westport First Selectwoman Diane Farrell.

But as McCain greets two breakfast-eating business partners, one from Stamford and the other from Bridgeport, the topic turns to the presidential race. The two men tell the senator they support President George W. Bush, and to that end, McCain says, "(Osama) Bin Laden may have just given us a little boost. Amazing, huh?"--referencing the al-Qaida leader's new video broadcast by the media Friday.

The two men, who requested anonymity, nod their heads in agreement. Later, while riding with Shays on an RV to a rally at the Stamford Government Center, McCain further explains, "(The video) is helpful to President Bush because it puts the focus on the war on terrorism." Whatever the focus, the re-emergence of bin Laden's image, appearing healthy and safe, has thrown a wildcard into the election season late in the game, perhaps juggling voter perception about national security. And judging from early reaction by local candidates and voters at two Get Out the Vote events Saturday -- the Shays rally in Stamford, and a Farrell event at her Stamford campaign office -- reaction to McCain's view that bin Laden's return to the public eye helps the president is a polarizing take.

"How sad that they characterize what's obviously a threat to national security as a political tool," Farrell said. "What an exploitative statement. The fact of the matter is bin Laden is still out there. And it's unfortunate that their leadership and this administration has not been able to capture him." Mary Fetchet of New Canaan, whose son Brad, 24, an equity trader, was killed in the World Trade Center attack, spoke on behalf of Shays at the congressman's rally. She praised him for his efforts in pushing for the formation of the 9/11 Commission, and for keeping up the pressure to implement its recommendations. She said seeing the face of bin Laden Friday reminded her that the government has more work to do.

"He's still alive, and yet the administration, whose platform is the war on terror, has no system in place to deal with threats," she said. "How can you evaluate what government failures there were and not implement a strategy immediately? It's been three years and we've seen absolutely no action ...there is no domestic focus." Fetchet said she is impatient that the 9/11 Commission's four recommendations -- to appoint a national intelligence director with budgetary authority, create a counterterrorism center, a civil liberties board, and declassify intelligence budgets -- have not been set into action. She added that officials from the Department of Defense are the ones she holds accountable for blocking the recommendations, as well as the Bush administration for "not really giving full support." McCain took unnamed politicians to task as well for blocking the recommendations. "People are more interested in their own turf, their perks ... their own little empires ... than in national security, particularly in the Senate," he said. "Intelligence reform pressure will be intense when we go back to lame duck session ...These people ought to be held accountable, no matter what party they're in." Another of the senator's targets Saturday was Farrell, whom he accused of negative campaign ads that mischaracterize Shays as a Republican party loyalist. "I say to his opponent -- I don't know her -- shame on you for the bitter campaign you've run." Responding to the charge at her own rally, Farrell dismissed the criticism. "Chris just doesn't like being challenged," she said. "He hasn't had a tight race in 17 years. Chris has never disputed the facts being presented. It's not a case of personalities. It's positions." The core of Farrell's case against Shays -- who maintains he is more of an independent than a partisan Republican -- is that he has abandoned his moderate stance and become increasingly right-wing. A "Congressional Quarterly" study of Shays' voting record from 1987 to 2000 shows he voted along party lines 63 percent of the time. But In 2001 and 2002, 78 percent of Shays' votes were with his party.

Shays' backers counter that only one Republican congressman, Jim Leach of Iowa, has voted across party lines more than Shays over the past two years. Shays strays from his party on key positions such as his pro-choice and environmental advocacy work.

The war in Iraq is one issue where Shays' support of the president has attracted the most criticism from Democrats. But his support for the war's justification has not precluded him from breaking party lines in voicing opposition to the way the war has been fought.

While riding with McCain, Shays cited flaws in the administration's war plan. He said it was a mistake to completely disband the Iraq army and government in the war's early stages, and that U.S. forces were not properly led to contain caches of explosives in the conflict's beginning. "We knew Saddam had deployed caches of weapons all along the Iranian border ... We did not secure enough, absolutely not," Shays said.

A study by the Lancet medical journal released this week found that 100,000 Iraqi civilians have been killed since the U.S.-led invasion. Half of those dead are women and children; most of them victims of airstrikes by coalition forces, according to the study -- the first of its kind to examine the death toll by enlisting both Iraqi and U.S. public health experts.

McCain rejected the finding. "When you look at who's doing the killing, it's the insurgents -- a brutal group of people," McCain said. He added that the war will go on for a "lengthy amount of time, and be very expensive" in order to be a success.

The Pentagon reported on Oct. 19 that the US military death toll in Iraq has topped 1,100. The average number of insurgent attacks has risen to 87 per day this month, The Associated Press reports. Farrell said the political leadership that led the nation into war needs to be held accountable. "Foreign policy is ... supposed to be their side's strength," Farrell said. "But they didn't think the war through, so we have no exit plan and continue to struggle, and insurgents have taken over parts of the country." A University of Connecticut poll of likely voters released Tuesday found Farrell trailing Shays by five percentage points with a four-point margin of error. Two weeks ago Farrell was trailing Shays by seven points. Of the likely voters polled, 10 percent said they are undecided. "People tell me 'just tell them you're going to win.' How do I know I'm going to win? ... I don't," Shays told the crowd of approximately 100 supporters inside the government center. "I told my staff in January, 'We're in for the political fight of our life, and we'll get elected based on the job we do. If we don't do a good job, then we'll have to spin.' But we haven't had to spin." Asked on Saturday if she will win Farrell said, "Yes...Because we are on the right side of the issues." She added that the record number of voter registrations this year "shows that people are motivated to vote for change, not the status quo."