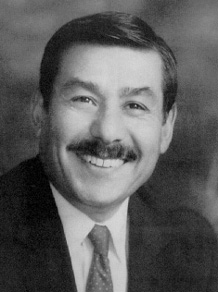 First Latino in the job, loyal ally of Cesar Chavez

Sacramento Mayor Joe Serna Jr., who rose from his roots as a farmworker to become Sacramento's first Latino mayor in modern history, died yesterday of kidney cancer and complications from diabetes.

Serna, 60, had briefly slipped into a diabetic coma Wednesday and asked to return home from the hospital Friday. He died at 3:47 a.m. surrounded by his family, said Chuck Dalldorf, a spokesman for the mayor.

Serna was a city councilman for 18 years and became mayor in 1992. He may best be remembered for helping reinvigorate downtown Sacramento and reforming his city's public schools by campaigning on behalf of new school leadership and a $191 million school bond.

Serna was a loyal friend of the late Cesar Chavez and the United Farm Workers Union since the 1960s, when he organized one of the state's first food caravans to feed striking grape pickers.

``He continued in every way he could to fight for the low-income (people), for the farmworkers, for the people that, for whatever reasons, were not being provided the respect and dignity they deserved,'' said United Farm Workers Union President Arturo S. Rodriguez.

``He was never thought of in Sacramento as anything other than Mayor Joe, everybody's mayor,`` said Ross.

Serna was born in Stockton and used to tell how his parents, poor Mexican immigrants who worked the fields, brought him home from the hospital in a cardboard box. He grew up in Lodi, picking grapes and tomatoes as a youngster to help support his family.

He earned his bachelor's degree from Sacramento State University, and attended graduate school at the University of California at Davis. He served in the Peace Corps in Guatemala as a community development volunteer specializing in cooperatives and credit unions.

Serna dubbed himself an ``activist'' who hoped to ``be the best mayor I can be so that the next ethnic person who . . . wants to be mayor can become the mayor, and it won't be a big deal.''

``Joe was a true giant in the Latino community, and a visionary leader for all of Sacramento,'' said Lt. Gov. Cruz Bustamante in a statement. ``He leaves a great legacy of public service, whether he was standing in the fields fighting for farmworker rights or visiting the White House advocating for the city he so dearly loved.''

Serna served on the Sacramento- area support committee for the United Farm Workers, and was a former member of the Sacramento Central Labor Council.

He also served on an array of municipal bodies, including the Sacramento Regional Transit board of directors, the Employment and Training Agency, the Metropolitan Cable Television Commission, and the Air Quality Management Board.

Serna and his wife Isabel have two grown children, Philip and Lisa. The family lived in Sacramento's Curtis Park neighborhood.

The mayor announced to the public in June he would not seek a third term because of his deteriorating health.

Since Serna died with more than a year left in his term -- a year and a day to be exact -- a special election will be held to determine a successor.

Serna's supporters expect a large turnout Wednesday, particularly from among farmworkers, for a funeral march from Cesar Chavez Plaza across from Sacramento City Hall to the Cathedral for the Blessed Sacrament. Serna's family requested that all donations be directed to the UFW union.