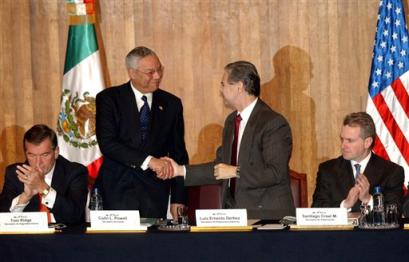 
President Vicente Fox's administration on Monday said they would renew their push for migration reform during bilateral meetings with top level U.S. officials this week.

Secretary of State Colin Powell and Homeland Security Secretary Tom Ridge arrived Monday, along with four other cabinet members and lower level officials for annual talks with their Mexican counterparts on security, immigration and economic issues.

Foreign Relations Secretary Luis Ernesto Derbez on Monday told reporters Mexico hoped to reach an agreement to regularize the possibly 5 million Mexicans living illegally in the United States before the end of Fox's term in 2006.

Derbez also said Mexico wanted to negotiate a new temporary worker program that would provide a legal alternative for Mexicans determined to work in the United States.

Many analysts have ruled out the possibility of negotiating a complete amnesty for Mexicans already in the United States, saying the best Mexico can hope is that U.S. President George W. Bush makes good on his campaign promise to pass a renewable, temporary work visa program.

Last January, in a an apparent bid to win the votes of Hispanics and U.S. business owners dependent on migrant labor, Bush said he would back a migration reform plan that would match migrants with U.S. employers who could not find Americans to fill jobs. The plan remains vague and has not been followed up with a concrete bill, although Bush did repeat his commitment to the proposal during the presidential debates.

While Fox has promoted the idea of expanding the North American Free Trade Agreement, his rhetoric has not been matched by either the United States or Canada.

Last week during a trip to the north-central state of Zacatecas, one of the leading sources of Mexican migrants, Creel called U.S. immigration policy "absurd." "It's absurd that (the United States) is spending as much as it's spending to stop immigration flows that can't be stopped, that flow in a natural manner, instead of using that money on real threats that pose risks for both countries," Creel said.

Zacatecas Gov. Amalia Garcia recently said some 18,000 Zacatecans migrate every year to the United States and already an amount equal to one-third of the states 1.3 million residents are living there.

Fox began his term promising to win the so-called "whole enchilda" of migration reform: an amnesty for Mexicans currently living in the United States and an increased number of temporary work visas.

While headway on migration seemed possible at the beginning of both presidents terms in 2001, negotiations were derailed by the terrorists attacks and the shift of the U.S. administration's priorities to Afghanistan, Iraq and the fight against extremist Islamic terrorism.

However, Bush's reelection and Republicans gains in the U.S. Congress and Senate have raised hopes that Mexico may return to the administration's list of priorities.

Powell and Ridge are being accompanied by Interior Secretary Gale Norton, Transportation Secretary Norman Mineta and Housing and Urban Development Secretary Alphonso Jackson, as well as the head of the Environmental Protection Agency and the Peace Corps.

Experts assembled at a forum held by EL UNIVERSAL last Friday said Fox's administration should change its negotiating strategy with the United States if they want to make headway during Bush's second term.

Some said Mexico should take advantage of the U.S. focus on security to sell a migration plan that would help reduce illegal crossings at the border. Increased security on the U.S.-Mexican border has led migrants to chart new routes through the deserts of Arizona and has increased their reliance on human smugglers. Some fear terrorists could easily pass through Mexico into the United States with the aid of criminal organizations currently guiding migrants.

"We should speak a common language and strategy guided by the theme of security in order to translate that into concrete benefits for Mexico. If we don't do this, we will continue to be irrelevant," said Guadalupe González. "We need to change the focus of the bilateral relation, placing migration within the context of security."

José Luis Valdés Ugalde, director of the National Autonomous University of Mexico's Center for North American Studies, disagreed, saying Mexico should not bow completely to the U.S. focus on security, but rather place the emphasis on economic integration.

"This could help prevent U.S. protectionists from disrupting the process of trade integration," Valdés said. From the point of view of national development, of prosperity and modernity, we can insert the issue of security. Security doesn't put food on the table."

Franciso Gil Villegas, a political science professor at the Colegio de Mexico, said the amount of disorganization within Fox's Cabinet due to upcoming presidential elections in 2006 made him doubt that Fox's team would be able to mount successful negotiations during the next two years Creel is widely expected to seek his National Action Party's nomination for the presidential race, and could soon resign from his post.

"We have to consider that everyone who conducts the domestic and foreign policies of Mexico are players in the presidential elections and are looking more towards 2006 than towards constructing common policies with George Bush's administration," said Javier Treviño, former undersecretary of foreign relations during the term of Ernesto Zedillo and currently an executive at Cemex.

This story has been posted in the following forums: : Headlines; COS - Mexico; Diplomacy; State Department