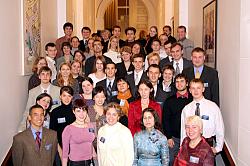 Caption: The first group of volunteers from the U.S.-Russia Volunteer Initiative meeting at the U.S. ambassador's residence last week. Valeriy Yevseyev / For MT

For Shoshana Billeck, it's a chance finally to indulge her passion for Russian studies and computer programming at the same time. For Alexei Vennediktov, it means a chance to enhance his prospects in the IT field, meet new people and hone his English-language skills. For Dan Winetsky, it's a chance to make a difference in the fight against HIV/AIDS in Russia while there's still time.

Billeck, Vennediktov, Winetsky and more than 40 others are the first to sign up for a new Russian-American exchange program that takes young volunteers across the Atlantic for monthlong work projects.

The new U.S.-Russia Volunteer Initiative, which in some ways is a replacement for the defunct Peace Corps program in Russia, will send 18- to 30-year-old volunteers to help fight HIV/AIDS, work on technology access programs and restore cultural sites in the United States and Russia.

Organizers say they hope that the lessons learned abroad can be put to good use back home.

"There is a common thread connecting the Peace Corps program to this one, and that is the spirit of volunteerism," U.S. Ambassador Alexander Vershbow said at a reception for the volunteers at his Spaso House residence last week.

Unlike the Peace Corps, the new U.S.-Russia Volunteer Initiative takes volunteers from both countries. The types of work are also more varied; Peace Corps volunteers in Russia had two-year standard tours, and mostly taught English.


The Peace Corps began sending volunteers to Russia in 1992, but the program was abruptly canceled last year after Russian authorities decided it was unnecessary and declined to reissue visas to volunteers. Federal Security Service director Nikolai Patrushev implied in December that Peace Corps volunteers in Russia were surreptitiously gathering intelligence. The program's leadership denied the charge.

Billeck, who graduated from a U.S. college in 1996 with degrees in Russian studies and computer science, is traveling to Ryazan to help design adaptive computer workstations for disabled children. She will be working under the direction of local children's charity Our Children.

"I've dreamed of finding a way to combine these two passions," she said. "I believe technology should be available to everyone, especially to those for whom it's most useful, and particularly the disabled."

Lepshin said he would observe and assist in counseling patients who have only recently discovered they are HIV-positive and are learning to cope with the illness.

Many of the American participants said fighting HIV/AIDS in Russia was a special priority.

"It's really exciting to have a chance to fight AIDS in Russia just as the epidemic is really beginning," said Winetsky, 23, who studied neuroscience at Oberlin College in Ohio.

Katayoun Bahramian, 31, who works with intravenous drug users at a clinic in Seattle, is headed for Irkutsk to run HIV/AIDS awareness programs and help promote safe sex with the Red Cross program there.

Vennediktov, on the other hand, a recent graduate of the Urals State University of Railways Transport, is headed for Spokane, Washington, to help design web access portals for Russian immigrants to the United States. Although his education is in information security, his hobby has long been designing web pages, he said.

Others are headed for cultural heritage sites to learn the nuts and bolts of taking care of historic buildings, and tips for promoting tourism.

Five of the American volunteers are headed to Yaroslavl to work on the restoration of the Cathedral of St. Peter and St. Paul.

Russian volunteers are headed to Newport, Rhode Island, to work on restoring early 20th-century homes, and to Jekyll Island, Georgia, to work with a late 19th-century hunting retreat for wealthy families of that period.

Although the program only involves about two dozen volunteers from either side now, organizers said they are hoping to expand it much further if the pilot version is successful.

This story has been posted in the following forums: : Headlines; COS - Russia; Exchange