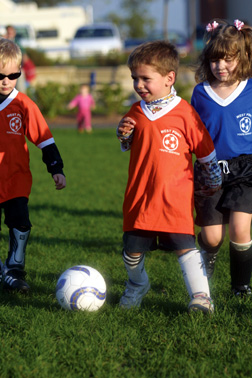 ALBANY -- A Richmond soccer coach who witnesses said assaulted a referee Saturday may face criminal charges and a lifetime ban from the sport.

Jerry Nelson, referee coordinator for the Alameda-Contra Costa Youth Soccer League, said the Richmond Cabritos coach, who has not been identified, could be banned from soccer across the country.

Albany Police Lt. Daniel Adams said no arrests have been made in the case and a criminal complaint would be filed with the Alameda County District Attorney's Office as soon as the investigation is complete.

Local soccer officials have already filed a complaint with their state organization.

"Anytime there is an event like this, which is very infrequent around here, it's taken very seriously," Nelson said. "I've seen the list of people banned 15-20 years and it's always related to an extreme case of assault on a sports official."

The incident apparently stemmed from a routine check on player eligibility. Coaches are required to submit "passes" of registered league players at each game for insurance reasons and age verification.

The passes were being checked at halftime of a game between the Richmond Cabritos and the El Cerrito Hurricanes when referee Bruce Greenlee, 56, found one player from the Cabritos didn't have one.

Nelson said the Cabritos coach had been warned about using ineligible players, and the appropriate thing was to terminate the match.

"(The referee) had abandoned the match, the coach came unglued and attacked and kicked him," Nelson said.

"Bruce needed five stitches and was under observation for concussion."

A report filed by the league with the California Youth Soccer Association is expected to be forwarded to the national body governing soccer at every level -- United States Soccer.

There, a nationwide database records persons involved in acts of violence at any level of competition. Results could lead to a lifetime ban from the game in any capacity, Nelson said.

"From coach to player to referee," Nelson said. "Indoor, outdoor, youth, adult. That's how serious the soccer organization in this country takes this stuff. It's already been put in motion by the fact that we filed this report."

About 2,600 children from the Oakland-Berkeley border to San Pablo play on teams in the Alameda-Contra Costa Youth Soccer League. Starting in September every year, the league hosts upwards of 60 games every weekend until Thanksgiving.