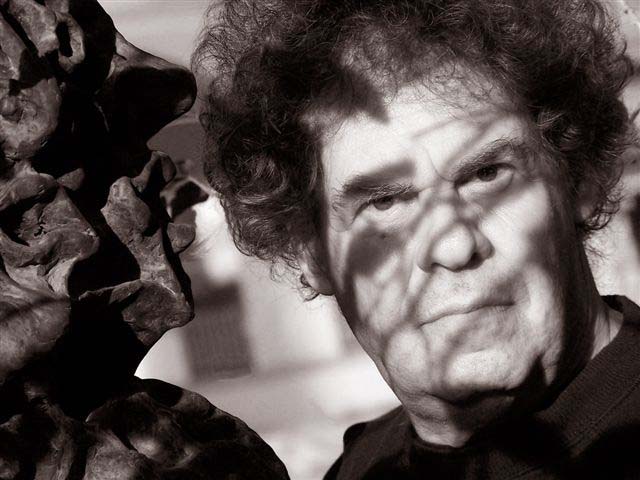 Ho Baron’s family moved from Chicago to El Paso in 1950, when he was eight years old. He attended the newly-opened Mesita Elementary, graduated EPHS in ‘59, and got a degree in English at Texas Western in ‘63. He recalls life in El Paso as sweet and naive in those days: ‘Nobody locked their doors.’

Baron went for a Masters in English at the U of A in Tucson, and that’s where his ideas about art, literature and life began to gel. “I wrote my thesis on Joyce Carey’s ‘The Horse’s Mouth,’ a novel about an artist who believed in William Blake’s idea that the artist is a child and the child is an artist. Herman Hesse also had a strong impact on me. His characters were truth-seekers, but it wasn’t until years later that that I realized that they were unfulfilled and womanless. Because of these writers’ influence, and a couple of other factors, I think I always stayed a little childlike, I stayed young. I spent several years just wandering, and I was noncommittal. I never had children and I didn’t have to play a familial role, so time didn’t pass for me the way it did for other people; I had the freedom to be creative.

“I don’t think I consciously did it to avoid Vietnam, but after I got my Master’s, I joined the Peace Corps and was sent to Nigeria where I got caught up in two coups and a civil war. After being caught in the crossfire between the Biafrans and the Nigerians, I was evacuated and transferred to Ethiopia where I stayed another six months – this was in 1968, I was 26 – and then I went to Israel and got a job on a kibbutz. When it started getting shelled, I returned to the U.S., and everything was in turmoil here too. Students were rioting on the campuses, the blacks were rioting in the cities, but I was back in El Paso where nothing was happening, so I moved to New York. I worked for the welfare department in the city, but then I moved up to Woodstock. The festival was coming and everyone was saying that it was going to ruin Woodstock, so I left and missed the festival.

“Actually, I missed a lot of what happened in the 60’s because I was a little older than the hippies, and I wasn’t into the music. I was more solitary, and I read continuously. I was more into the Beats, but the Beats were elusive, the Beats was just a handful of guys, it was more of a myth.

“When I left Woodstock, I went to the Virgin Islands, and became a teacher, but the students were having race riots and I was the wrong race so I quit and became a night clerk in a hotel, and then I went back to New York again and moved into a commune in Brooklyn.

“All this traveling really sparked my imagination and inspired me to write. I wrote three or four novels but I don’t know that any of them were successful. My characters were archetypes, they weren’t developed. My problem with writing was that I had preconceptions of what great literature was and I tried to write great literature, and my writing wasn’t free.

“One night in the commune, a guy named Freddy was doing some pen and ink drawings and he reached over and handed me the pen, and that’s when I started drawing. I liked the line, I liked the way the Chinese ink flowed from the pen, and I probably did 500 to 1,000 drawings over the next ten years. I felt I could fantasize and go in any direction in the visual arts because I had no preconceptions. When I did that very first pen and ink, I signed it ‘Ho’ at the bottom, because ‘Howard’ didn’t have a ring to it, and that’s when I became ‘Ho.’

“It was 1970, and everyone was quitting their jobs, and I quit mine to travel in Europe, but I met a group of cartoonists in Antwerp the first couple weeks I was there and I stayed with them for over two years. They were putting out comic books and living in a communal situation, and I became their photographer.

“I met a Belgian woman who had a daughter, and we moved back and forth between the U.S. and Belgium, trying to get our visas straight, and get her divorced. We moved to Austin together so I could get a degree in library science and we finally got married there, but after I finished school, she wanted to study at the Fashion Institute of Technology and I didn’t think I could get a job in New York, so I took a job 300 miles away in the mountains of western Pennsylvania, and we separated.

“After a year, I was offered a better job in Philadelphia, so I moved there with a schoolteacher I had met in the mountains, and we lived together for two and a half years, but then my dad and brother asked me if I wanted to make some good money with them in their pawnshop on South El Paso Street, so in 1980, I moved back down, by myself. In ‘82, I got married to an art student and we bought a house on Piedras Street. My second wife and I were together for three horrendous years, but I’ve stayed in the same house, and now it’s filled with an incredible amount of stuff.

“Before I moved back to El Paso, I took a sculpture class at the Philadelphia College of Art and I became intrigued by the three-dimensional. When I returned to El Paso, I enrolled in art classes at UTEP, really just for social reasons, just to be involved in the community while I was working in the pawnshop, and I went through all the sculpture instructors. I got into modeling, but all the UTEP instructors were welders and gluers.

“I did some pours at UTEP, but then I started casting in Santa Fe and stopped going to UTEP. Then I found the foundry in Juarez and started casting there. I follow the whole process throughout, but I don’t do the actual pours anymore, because doing the foundry work interferes with the creativity of modeling. I’ve developed an intuitive style. I don’t do any drawing first, I improvise with the clay, and the pieces just grow.

“I’m in no hurry to produce a piece so I make them intricate. If I sold my work, I’d be producing them quicker, they wouldn’t be so involved, and I wouldn’t have developed the surrealistic style that I have. I use the human form, and all the noses and tits and asses and eyes, because it reflects my philosophy about the multiple-self, who we are. I like them to look like they’re the ruins of other cultures, or like they’re from the ocean, and I call them ‘Gods for Future Religions.’ When society’s tired of its existing gods, it’s going to need new ones, and I’m ready.

“I make art primarily to make art. When you read a novel or you go to a museum, you’re the recipient of the creative act, and I have a desire to be the creator; I don’t want to be the passive recipient; I’m an active person. Even though making sculptures is very physical and a hard thing to do, it’s not work to me, it’s play.

“I probably have 250 sculptures around my house. I do four or five sculptures a year, and I produce two or three of each before I go onto the next one. When I finish one piece, I start on another. I have sculptures all over the house; I’ve created my own museum.

“I worry that the floors in my house can’t hold all the bronze, there’s probably a couple tons of it, and I feel like I have to keep making more.

“I don’t know what’s going to happen to all these sculptures when I die. They might be melted down for bronze or they might just drift around. They’ll exist on their own one day, or they’ll disappear, like me.

Richard Baron is a writer and photographer, writing and taking pictures in his hometown of El Paso. He can be reached at rbaron@elp.rr.com. Ho Baron is his brother.

This story has been posted in the following forums: : Headlines; COS - Nigeria; Art; Sculpture