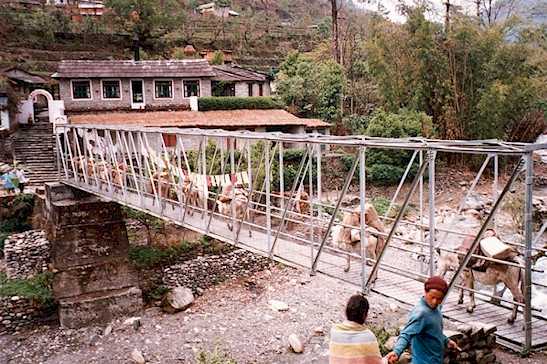 "I joined the Peace Corps because I was pretty sold on their mission," said Smukler, a Peace Corps volunteer between 1997 and 1999. "I wanted to help a community with new ideas and energy, and to experience another culture by living in a community and speaking their language. There's no other volunteer organization that's quite like it."

Since the Peace Corps began under the Kennedy administration in 1961, some 1,170 UCD graduates have served the two-year commitment in a foreign country.

In 2000, UCD Chancellor Larry Vanderhoef formalized an agreement with the Peace Corps to create four new master's degrees in international programs. In the new programs, Peace Corps volunteers may choose to study horticulture and agronomy, soil science, plant biology or preventive veterinary medicine, get two years of field experience in the Peace Corps, then return to finish their degree for a final quarter.

Last year alone, more than 55 UCD graduates became Peace Corps volunteers, making it the 20th most volunteer-producing university in the nation. This year there are 46 former Aggies serving abroad.

Smukler was drawn to the Peace Corps while finishing his undergraduate degree in environmental biology and agriculture. He wanted to do something substantial to help the world.

Spending two years in the shadow of Mount Everest, Smukler was a forester and agricultural developer in two different villages in Nepal. In one village, he lived in a a local family's barn, next to agricultural fields, with oxen as roommates.

He describes the main town as "a bad Hindi film meets a bad western," with dusty roads and Hindi music blaring at all hours. He said the Naples people have a special zest for life.

"One of the benefits of living with a family was being a part of the community and enjoying the celebrations," he said. "Every week they are always throwing some kind of crazy celebration. It was fun when I got to join in."

In addition to enjoying celebrations, being integrated into the community gave Smukler the opportunity to create strong friendships with the people of the village. He befriended a Buddhist monk in the region who became Smukler's confidant and translator as he tried to assimilate into a new culture.

"Whenever we got together, he would use it as an excuse to drink beer and eat meat," Smukler said with a laugh. (Buddhists' five precepts are to abstain from harming living beings, stealing, sexual misconduct, lying, and intoxicating drinks or drugs.)

"Here I was trying to be culturally sensitive and here was a monk who wanted to eat meat and drink beers with me."