Chris Matthews discussed Arafat succession with Lawrence Eagleburger: "I saw that working the Peace Corps, the whites preferred dealing with a strong black leader who controlled the negotiating and controlled the country once they gave back their colonial power to him, to the people themselves." 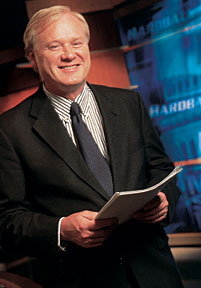 Chris Matthews discussed Arafat succession with Lawrence Eagleburger: "I saw that working the Peace Corps, the whites preferred dealing with a strong black leader who controlled the negotiating and controlled the country once they gave back their colonial power to him, to the people themselves."

Lawrence Eagleburger served as secretary of state under the first President Bush. Lawrence, it does seem like general hospital. Some kind of strange daytime soap opera.

What—first, do you believe that Suha, the wife of Yasser Arafat, means it, when she says the Palestinian leaders are going to literally bury her husband alive?

LAWRENCE EAGLEBURGER, FMR. SECRETARY OF STATE: I don‘t—I doubt it very much. I suspect what she really is saying here is that they want him to die and get it over with so they can go on from there. I suspect that‘s what she means. But you know, who can predict this silliness?

MATTHEWS: What are the rumors in the Arab street that the Israelis had a hand in this guy‘s condition?

Even Keith Miller‘s report there was a bit murky at the end.

What mystery disease is this, is it a blood illness? Is it cancer?

EAGLEBURGER: I was going to say, given everything that just preceded us here talking, it should be fairly clear that nobody knows what‘s going on. I very much doubt that the Israelis have given him some particular disease. They‘ve had more opportunities to do that sort of thing than not. I think it‘s—he‘s running out of gas.

MATTHEWS: And they could have knocked him off any time they wanted to, the Israelis and a lot cleaner than this.

Let me ask but the competition for his successor, the succession. Is it going to be Mahmoud Abbas?

What amazes me is he was the guy whose power was undermined by Yasser Arafat.

Why would he be seen as a credible replacement?

EAGLEBURGER: What‘s going to decide that, I think, is how the members of the Palestinian movement as such see the conditions and who they think would be most successful. I have to tell you, I think while the prime minister, you know, while he may for a while be—seem to be in charge, I think it‘s much more likely, first of all, that this will get bloody before it‘s over in terms of who takes over. And it will probably be unfortunately, a more radical type that will end up being in charge.

MATTHEWS: Well, sometimes the tougher guy is the better negotiator, because the tougher guy can control his people. I saw that working the Peace Corps, the whites preferred dealing with a strong black leader who controlled the negotiating and controlled the country once they gave back their colonial power to him, to the people themselves.

And I was wondering whether in this power struggle, between—certainly involving Hamas and Islamic Jihad and the remnants of the PLO, who‘s going to win?

EAGLEBURGER: Thank you very much. I will tell you right now, the best I can tell you at this stage is, if I had to bet money without trying to name a person, I would bet you that it will end up that the more radical elements within the Palestinian movement, not necessarily the worst—the most, most radical, but they will be certainly leaning in the direction of more radical than moderate. And I think they will probably win. Who that is, I don‘t know. But I will also bet you that it won‘t be settled in a short period of time. I suspect it will take some time and there may well be some deaths before it‘s finally settled.

MATTHEWS: Well, let‘s catch up on a couple of facts. Suha, this purported wife of—I say purported because she hasn‘t seen him in three years. She apparently has something to do with his financial arrangements. Is that the presumption in the Middle East, that‘s she‘s sitting on a barrel of money in some French bank?

EAGLEBURGER: Whether she is or not, I‘m not sure. But it is certainly around the Middle East and certainly as far as I can tell here in the United States, there‘s a strong assumption that there is a great deal of money in the banks or a—well, banks, probably, that Arafat has had use of and can control. Whether she is able to get at it right now, I‘m not sure. But I wouldn‘t be at all, again, all surprised if what she‘s angling for now is some way of getting at that money.

EAGLEBURGER: I guess not. And there it wouldn‘t make any difference anyway.

MATTHEWS: Well, the question is, is there a presumption in the Middle East that Arafat has a ton of money in Paris?

EAGLEBURGER: Oh, sure. I‘m not at all sure that his own Palestinians believe it, but everybody else does. And there‘s just I think, no question he‘s got millions in banks around in Europe and probably in the Mediterranean.

MATTHEWS: Well, I went over there and interviewed him, Mr. Secretary, a couple of years ago. And it is such a strange environment, Ramallah. You go into it, it‘s like a gas station, a bunch of guys walking around in repairman costumes. There‘s no real army. There‘s no real anything, except a fleet of Rolls Royces or Mercedes hiding—hidden in the garage there. You have to check into a motel before you can see him, and you can‘t see him until like midnight.

And then you see him, and you‘re like meeting this guy, looks like Ringo Starr, who‘s got this strange, almost papal quality. He‘s so—so quiet and what‘s the right word, special in the way he talks to you. And if you raise any issue of violence or terrorism, he acts like, I would never think of such a thing. All I want is peace. Is that just a self-deluding masquerade or just a masquerade pure and simple or what is it?

EAGLEBURGER: I think it is a combination. I met with him only once. I can‘t give you any real expertise on it. But I suspect that this is a very complicated gentleman. I suspect he does think he is doing something for his people. But I also think he thinks he is doing something for himself. And if you look it, if you look at it, Chris, he had a real opportunity in the last, remember the last six months or so of the Clinton administration.

MATTHEWS: I remember, tub and everything. And it looked like he had a shot of cutting a deal.

EAGLEBURGER: He had a real shot at it and he couldn‘t do it. And the reason I think he couldn‘t do it was multifold. But for one thing, I‘m not at all sure he was able to bring his people along. But more important than that, I suspect he recognized he couldn‘t run a country if he had one. Certainly the way he‘s run the PLO, the Palestinian...

MATTHEWS: I want to talk to you about a theory that‘s been developed about why he won‘t cut a deal, why Arafat will look at a deal that includes the peace of Jerusalem and means a chance to get back to the shrines of Jerusalem, it means a chance to have a real country in the United Nations with a Palestinian flag and a Palestinian diplomatic reality in the world from which he could launch a long term effort to enlarge that nation.

We‘re going to come back and talk to Lawrence Eagleburger, the former secretary of state about that and later, Senator John Breaux, one of the real charmers of the Democratic party, a real cajun who is leaving the United States Senate but we want to hear what he thinks before he leaves. We‘ll be right back with Johnny Breaux and former secretary of state Lawrence Eagleburger. You‘re watching HARDBALL on MSNBC.

MATTHEWS: We‘re back with former secretary of state Lawrence Eagleburger. Mr. Secretary, one theory about Yasser Arafat is that he would never sign any deal with Israel that prevented the ultimate extinction of that country. In other words he would sign a deal in the short run but he would never agree to something for example that wouldn‘t include the right of return for Palestinians born in Israel proper. Not including the West Bank. Because he doesn‘t want to be known as the guy that sold out the possibility of someday creating a Palestinian state which might include a lot of Jewish people still there. But he certainly doesn‘t want to agree to anything that looks like a long term deal, establishing permanently a Jewish state. That is his deal. He won‘t sign the deal.

EAGLEBURGER: I think what you‘ve just said is correct. You will recall again, and when this time it looked like we might get a deal, that the right of return with one of the issues that never got settled, I think you are correct that he doesn‘t, he wouldn‘t want to sign it for that reason. As I say, I think there are a whole host of reasons. Not least of which is I suspect he recognized if he ever got a state and had to run it, he couldn‘t. That that would come down around his ears. Look. This all right now looks like sort of a semicomedy what‘s going on at the moment. But we should remember that this fellow, over very, very many years has caused the death of very, very many people. And I must tell you, my sorrow over his departure will not be very great.

MATTHEWS: Let me ask you about that. In other words, it is an objective fact. You seem like an objective public servant. This isn‘t an argument, one of these endless arguments you get in the Middle East where there‘s no such thing as a straight report. Even a medical bulletin is argued over as we‘re seeing these days. But you say it‘s an objective fact in the world community that Arafat was behind terrorism. This isn‘t arguable?

EAGLEBURGER: Not for me it isn‘t. But a lot of people will argue it, I suppose. I just don‘t see how anybody can argue that case. I am not saying, by the way, that the Israelis are without some responsibility for everything that‘s gone on. But what I am saying is that Arafat as such has been a, historically, I think, a bad character and he will be judged as such. And he has been responsible for terrorism. He‘s been responsible for the fact that they have not been able to reach an agreement with the Israelis. He bears a great deal of responsibility for the mess.

MATTHEWS: I think the worst thing he did for my own part is destroy the confidence in the Israeli middle. The moderate, the voter like most of us would be against the hope for peace. He turned them off when they wanted peace. They still do but they‘ve lost heart. Anyway, we‘ll talk to you again. Please come back again, former secretary of state Lawrence Eagleburger. Up next, what will take the Democratic party to appeal to southern voters? Louisiana Senator John Breaux will be here. You‘re watching HARDBALL on MSNBC.

This story has been posted in the following forums: : Headlines; COS - Swaziland; Journalism; Television; Palestine