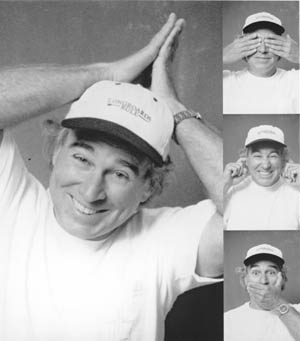 THERE is a fine line between fiction and nonfiction, and I believe Jimmy Buffett and I snorted it in 1976. The two of us are among the few musicians in the Western world who make a regular habit of writing prose, which may also explain why this newspaper decided upon me to review this book rather than, say, Philip Roth. Maybe it was God who selected me to review Buffett's book. Whoever sent it to me, however, has created a happy circumstance because I think ''A Salty Piece of Land'' is very possibly Buffett's best work to date.

In many ways this novel is pleasantly evocative of another maritime adventure story originally serialized in 1881 under the title ''The Sea-Cook.'' Two years later, of course, the title was changed to ''Treasure Island.'' Though Robert Louis Stevenson, who was a big crowd-pleaser in his day, has assuredly weathered the test of time, it is a little too early perhaps to make a judgment on Jimmy Buffett. What the two writers share, however, other than a deep and abiding love of the sea, is an unabashed and unequivocal desire to create and to view each of their works first and foremost as an entertainment. In any literary era, in any latitude, this attitude must be considered as refreshing as it is rare.

''A Salty Piece of Land'' is a tangy tale, at times turbulent and unpredictable as the ocean, at times as wistful as the whitecaps on the waves. Every book, I suppose, can be said to be a voyage of words, but in this novel the reader will encounter a colorful crew indeed: cowboys and Indians, sailors and pilots of seaplanes, treasure hunters, ghosts, and, of course, those ubiquitous pirates. Yet the book revolves around an old abandoned lighthouse on the mythical island of Cayo Loco, a lighthouse that, in true Stevensonian fashion, becomes something of a spiritual beacon in a world remarkable for its unwillingness to be led to the light.

Perhaps it is because Buffett has long been a writer of lyrics that his prose style now seems to flow in a fresh, fanciful, finely imagined fashion. Tully Mars, for instance, is a troubled cowboy from Heartache, Wyo. who takes his pony to the shore, where he sees a 142-foot schooner emerging from the mist, with a 101-year-old female sea captain named Cleopatra Highbourne at the helm.

Buffett knows better than most that life is all about how we mix our metaphors. And yet the nonfictional aspects of the book appear to be as grounded and well constructed as, for want of a better image, a lighthouse at sea. Buffett has clearly researched his subject. But I suspect the true research for this novel has already been done on land and air and sea in all the years the author has spent as a highly active participant-observer of life. What makes the incredible so credible to the reader, what makes the old lighthouse shine again, is the spiritual savvy Buffett has gleaned from the beach of life as he's wandered in the raw poetry of time.

I would be remiss if I did not mention that, just as Jimmy Buffett was indubitably influenced by the seagoing adventures of Robert Louis Stevenson, R.L.S. himself was inspired by the work of another great writer, Herman Melville, whose ''Moby-Dick'' was published in 1851. For the remaining 40 years of his life, he watched it languish in the whaling sections of libraries and bookstores. ''The important books,'' said Melville, ''are the books that fail.'' Yet even Melville couldn't have predicted that his character Starbuck would lend his name to a giant corporate necklace that would one day seek to strangle America. All the more reason to follow Jimmy Buffett's footprints in the sand and look for that light on ''A Salty Piece of Land.''

Kinky Friedman's most recent books are '' 'Scuse Me While I Whip This Out'' and ''The Great Psychedelic Armadillo Picnic.''

This story has been posted in the following forums: : Headlines; COS - Malaysia; Writing - Malaysia; Humor; Music