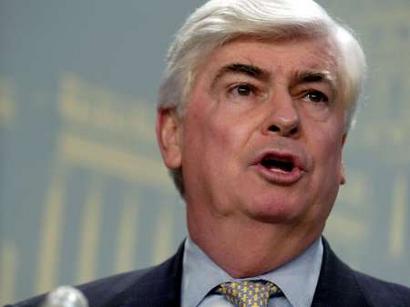 Caption: Sen. Christopher Dodd (news, bio, voting record) (D-Ct) briefs the press on his concerns over reports of equipment and protective gear shortages by U.S. troops in Iraq (news - web sites), December 8, 2004 on Capitol Hill. Dodd said he was greatly disturbed by remarks made by Defense Secretary Donald Rumsfeld, who responded to a question on the subject by saying 'You go to war with the Army you have.' REUTERS/Mike Theiler

Dec. 9 (Bloomberg) -- U.S. Senator Chris Dodd demanded answers on military preparedness from Donald Rumsfeld, describing the defense secretary as ``cavalier'' in his response to a soldier who said troops in Iraq are reduced to scavenging for materials with which to protect their vehicles.

In a letter to Rumsfeld, and in comments yesterday to reporters, the Connecticut Democrat asked when the Defense Department will meet last year's commitment to ensure all military vehicles in Iraq are adequately armored. That pledge was to have been met by July 31, Dodd said in the letter, posted on his Web site. He also asked whether the Pentagon will be asking Congress for funds to address equipment shortfalls.

Rumsfeld yesterday told U.S. soldiers in Kuwait who are part of the military coalition in neighboring Iraq that ``you have to go to war with the Army you have.'' He was replying to Army Specialist Thomas Wilson, who asked, ``Why do we soldiers have to dig through local landfills for pieces of scrap metal and compromised ballistic glass to up-armor our vehicles?''

The number of U.S. military members killed in action in Iraq topped 1,000 yesterday, according to a Pentagon tally. Half the casualties were caused by insurgent attacks on vehicles with homemade bombs left on roads or by rocket- propelled grenades, according to Representative Ellen Tauscher, a California Democrat on the House Armed Services Committee.

The defense secretary's response was ``unacceptable,'' Dodd wrote. ``Our troops go to war with the Army that our nation's leaders provide. Our military should spare no expense to ensure the safety of our troops, particularly as they confront a hostile insurgency and roadside bombs throughout Iraq.''

Dodd, who last year wrote an amendment to a bill to require that the Defense Department reimburse soldiers and their families for buying their own equipment, questioned Rumsfeld on how that policy would be implemented.

``It is not our soldiers' responsibility to equip themselves with the protection they need,'' Dodd wrote. ``It is the solemn duty of the military's civilian leadership, members of Congress, and the commander-in-chief to outfit our troops with gear critical to their safety and combat effectiveness.''

A total of 1,001 members of the U.S. military had been killed in action in Iraq as of 10 a.m. New York time yesterday, according to the Defense Department's toll. Including deaths in non-hostile incidents, such as road accidents, the toll rises since last year's invasion rises to 1,276.

To contact the reporter on this story:
Alex Morales in London at amorales2@bloomberg.net.

To contact the editor responsible for this story:
Peter Torday at ptorday@bloomberg.net.

This story has been posted in the following forums: : Headlines; COS - Dominican Republic; Politics; Congress; Iraq; Military