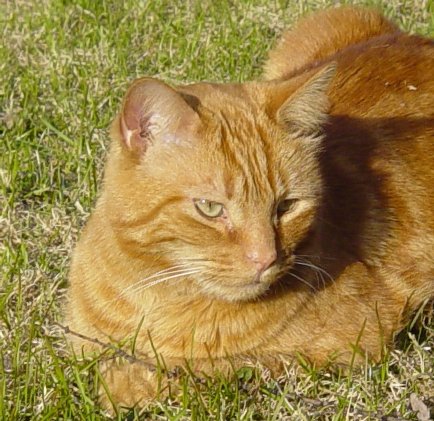 Note: The orange cat shown above is *not* Fred and is for illustrative purposes only - editor.

Faye Farmer expected to take away many things from her stint as a Peace Corps volunteer in Lesotho, a small country in southern Africa. A cat, however, wasn't one of them.

But a cat is what she ended up with. A woman in her compound raised kittens to chase and eat mice, and would then sell them to the locals. Farmer, who loves cats, started feeding them. At the end of her stay, the woman offered to give Fred, an older male cat that no one wanted, to Farmer.

"There were so many reasons not to ship a cat to the States. My mother thought I was a complete idiot," Farmer says. "On the other hand, there are no extra cats in Africa. Well-fed cats tended to end up as hats or clothing in some villages."
advertisement


So Fred flew as cargo from South Africa to Miami. After a small problem with Customs in Miami, Fred was cleared to fly to Sky Harbor, where Farmer met him.

"He looked whipped," she says. "He'd been traveling for two days."

He quickly recovered and, as it turned out, Fred wasn't the only one who benefited by the arrangement. When Farmer returned from Africa, she found it difficult to readjust to life in America. The people and the pace of life were daunting and hard to get accustomed to.

"Fred kept me from going completely mad when I got home," remembers Farmer. "He was just there, and it's always nice to have that unconditional love.

"Shipping him back was the stupidest thing I've ever done, but he's great."

What is your pet's name and breed?

My pet's name is Fred. He was one of two orange cats born to a calico.

How did you choose your pet's name?

I named one of the orange cats Fred and the other Ginger. He is actually Fred the second, as Fred the first was sold with Ginger the first.

Where did you get your pet?

I served as a Peace Corps volunteer in Lesotho, a country surrounded by the Republic of South Africa. As a lonely and pet-trained American, I insisted on feeding the cats that were on my compound. As a result of my feeding the calico, Fred's mom, regularly with nutritious food, she was incredibly fertile for the two years. When I was preparing to leave Lesotho at the end of my tour of service, the grandmother in the compound offered me Fred.

He walks on everything: the TV, the tables, shelves.

Has your pet ever embarrassed you?

I lived for almost two years in a condo, where I didn't want Fred to be loose. This was a difficult arrangement for him to adjust to. I decided that I could walk Fred every weekend. The condo was about 10 feet from the Scottsdale green belt. I began walking Fred with a leash and a harness in the park. I got lax and walked him into the condo complex without the leash on. He saw another cat and immediately took off like the wind. He ran eight or nine times around the parking lot, with me following like a crazy woman yelling, "Fred, stop!" I finally found him and removed him from the other cat, who looked fine, just scared. When I looked up, Fred in arms, I noticed that about 10 people were staring at me, some smiling. I heard from neighbors for weeks afterward. He was leashed everywhere after that.

How do you celebrate your pet's birthday?

Fred was born between Sept. 22 and Oct. 13, 1998. I had been evacuated (along with all Peace Corps volunteers) from Lesotho for three weeks due to the arrival of soldiers from Botswana, who were instructed to quell political unrest that occurred as a result of elections in May. Lesotho was never the same in many respects, specifically economically and security-wise. Thus, Fred's arrival in the world is a little difficult to celebrate, but it is always honored.

What's the best thing about your pet?

He looks like any other orange tabby cat that ever was, but his story says it all. He is an exceptional cat, with about six more lives to go, and I hope to enjoy all of it with him.

This story has been posted in the following forums: : Headlines; COS - Lesotho; Cats; Pets