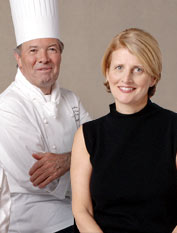 The founder of Manhattan's French Culinary Institute, Dorothy Cann Hamilton, loves going to restaurants, giving parties and cooking for her family. To do all this—and still lose weight—she asked the FCI chefs and alumni for a flexible, doable diet.
By Jennifer Tung

Dorothy Cann Hamilton, the founder of the French Culinary Institute (FCI) in New York City, is sitting in her office and describing the event she attended last night in tones that alternate between delight and resignation. "I was at Eleven Madison Park," she tells André Soltner, the dean of classic studies at the FCI and the former chef and owner of Lutèce. "First I had a glass of Champagne, which made me really hungry. Then came lobster soup with caviar. Then foie gras risotto, guinea hen, lamb. There were fantastic wines with every course. There was no way I wasn't going to eat it all."

"The only way to avoid it is to not go," Soltner replies with a shrug. Since skipping such events (in this case, a benefit for the anti-hunger, anti-poverty organization Share Our Strength) is not an option for Hamilton, she tells Soltner how she manages to indulge and still control her weight: "I just write off a meal like that and jump right back on my diet the next day. I exercise control so I can lose control."

It's an unconventional approach to weight management, but it accommodates Hamilton's passion for great food—the same passion that inspired her to open the French Culinary Institute in 1984. Under her leadership, the FCI has established itself as a place where serious cooks come for training in classical French technique, then leave with a strong foundation for developing their own style. New York City-based alumni, for instance, include Bobby Flay at Mesa Grill, Dan Barber at Blue Hill and Wylie Dufresne at wd~50 (Barber and Dufresne are both former F&W Best New Chefs). And Hamilton is constantly expanding and improving the school. Recently, she added wine courses to the curriculum and invited award-winning writer Alan Richman to launch a food journalism course.

Several months ago, Hamilton, who has flirted with fad diets like Scarsdale and Atkins in the past, set a new health goal: to lose 15 pounds and keep them off without giving up restaurant meals. To guide her on her mission, Hamilton, 55, turned to the experts around her, the FCI chefs and alumni. Gayle Reichler, a dietitian and FCI grad, would give Hamilton personalized dietary guide-lines. Robert Surles, a.k.a. Chef Bobo, an FCI alum now working at Manhattan's Calhoun School, would contribute quick, healthy recipes that would also appeal to Hamilton's husband, Douglas, a venture capitalist, and her 11-year-old daughter, Olivia, a fifth grader at Calhoun. And Soltner would provide light, elegant recipes for entertaining.

At their first meeting, Reichler began by asking Hamilton what she refused to change about her diet. "My must-have is a glass of wine at the end of the day," Hamilton said. She usually skips breakfast, so Reichler suggested that Hamilton eat a piece of fruit in the morning ("Her natural hunger doesn't kick in until later, so I was okay with not adding much more," Reichler says). Then she created a plan with a total daily intake of 1,450 calories that includes wine. Rather than focusing on just protein, carbohydrate or fat, Reichler's program prescribes combining all three at each meal. Because the body digests carbs first, then proteins, then fats, this regimen would help Hamilton feel satiated longer.

"Dorothy's goal was to lose weight while still being able to eat out at restaurants," Reichler says. If she was going out for a big dinner, say, she'd need to cut back at lunch to compensate. Regardless of meal size, Hamilton learned, "I have to eat something delicious, because then I eat more slowly. That's important because Gayle taught me it takes the body about 20 minutes to feel full. It's like having a $100 bottle of wine: You can't drink it quickly."

For breakfast, Hamilton followed Reichler's advice and began eating fruit—in her case, grapefruit mail-ordered from Red Cooper, a citrus company in Alamo, Texas. "It's so sweet you don't have to add sugar," she says. "Fruit has to be fantastic or I won't touch it." For lunch, she switched from eating sandwiches to having a three-egg omelette with mushrooms and tomatoes ("Large eggs are only 75 calories each," she points out, "and having protein at lunch helps carry me through the day") or a chopped salad of greens, cucumbers, celery, chickpeas, peppers and feta. "This diet is very French," she says. "I like fresh foods, and I never snack."

Despite her busy business dining schedule, she cooks dinner for her family three or four nights a week. Bobo gave her a recipe for a Thai-style dish of boneless, skinless chicken thighs sautéed with garlic, fish sauce and chili powder. That appealed to Hamilton, who speaks Thai. "I was a Peace Corps volunteer in Thailand," she says. "Olivia—who's a demanding, picky eater—likes Thai food too." Bobo also suggested pork chops stuffed with shiitakes, Vidalia onion, rosemary and thyme. At first, Hamilton was concerned that chopping the ingredients would take too much time on a weeknight. "It's so easy—it'll take you 10 minutes," Bobo assured her.

On weekends, Hamilton often throws informal dinner parties. Soltner offered a recipe for artichoke hearts, cauliflower and mushrooms stewed in white wine, a lovely first course. "This seems labor-intensive," Hamilton said. "Trimming eight artichokes will take me half an hour." "Don't use a dull knife," quipped Soltner. Hamilton enthusiastically approved of halibut roasted en papillote with asparagus and snap peas. Hamilton had an idea to toss back at Soltner too. "I often make a whole red snapper in a salt crust," she said, leaning forward in her chair and gesturing with her hands. "I put it in a roasting pan with salt underneath and on top, and sprinkle it with rosemary and lemon juice. I wrap it in foil and bake it for an hour. You peel back the skin, drizzle it with olive oil and it's the most succulent fish." For dessert, Soltner suggested skewers of pear, mango and banana brushed with a rosemary-infused syrup and broiled until delicately browned, then drizzled with a caramel sauce.

After a month of following the diet and continuing to squeeze in workouts on most days (30 minutes on a stationary bike, 20 minutes of calisthenics and 10 minutes of stretching), Hamilton lost about seven pounds. And she figured out some more strategies for controlling what she eats at restaurants and on the road. At business events, she'll sip diet ginger ale or club soda with bitters and a squeeze of lime. ("It's a great diet cocktail that Julia Child told me about.") When traveling for work, she'll bring a few containers of Greek yogurt in a small insulated bag. She's been planning a culinary tour through Spain and Italy: "I'd like to lose three or four pounds extra before I go, because I know I'll gain them back when I'm there."

That flexibility is central to Hamilton's diet, as is old-fashioned willpower. Occasionally, she still has to resort to an emergency coping mechanism; a trick no expert taught her. "In tough moments," she says, "I sit on my hands."

Jennifer Tung is a contributor to In Style and often writes for the New York Times.

This story has been posted in the following forums: : Headlines; COS - Thailand; Food; Cooking; Culinary Arts; Art