When Jose Ravano's phone rang in Washington, D.C., the Plum native heard his wife, Irene Fraser, in Sri Lanka. Something terrible had destroyed the lagoon on which she lived, sweeping her inland and drowning her neighbors.

She was bleeding and in shock, but had found a phone at the Norwegian Peace Mission.

"She didn't think she was going to make it. She said, 'If it comes again, I am just calling because I love you,' " he said.

When Ravano switched on his television, he realized what had nearly killed his wife, a relief worker with Save the Children. And he knew he would be called to return to Sri Lanka, where he once cared for refugees from the civil war. 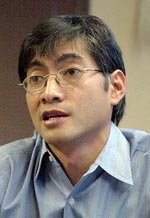 Today, Ravano begins the 29-hour journey to become relief coordinator for CARE in Sri Lanka. Yesterday, he visited the North Side warehouse of the Brother's Brother Foundation, which transports relief and development supplies. There he learned that an international transportation company in Moon, Panalpina, had offered to take two shipping containers of supplies to Sri Lanka. He was especially pleased because the magnitude of the Dec. 26 disaster may force CARE to ask transport companies for help.

Ravano, 38, is a graduate of Central Catholic High School who joined the Peace Corps after graduation from the University of Notre Dame. He earned master's degrees in public health and international relations from Johns Hopkins University. CARE then hired him to work war zones, sending him from Kosovo to Sri Lanka in 2000.

He worked inside the largely forbidden area held by the Tamil Tigers, who waged a separatist war for two decades. He set up camps for displaced persons and oversaw the rebuilding of schools. In 2001, he married Irene, a Scot who had worked on the rehabilitation of children in war zones for Oxfam and UNICEF.

Relief work caused long separations. In 2003, with a fragile truce in Sri Lanka, they moved to the United States. By night he studied human rights law at Georgetown University, while working for the Congressional Hunger Center.

But the peace stalled in Sri Lanka, in part because of problems with child soldiers. Irene accepted a 10-month contract from Save the Children to demobilize them, and returned to Sri Lanka in November.

Ravano was preparing to visit her when the calls came from his distraught wife and his former employer.

The scope of the disaster in the nation of 20 million is staggering. During the war he aided 80,000 displaced persons. Estimates of Sri Lankans left homeless by the tsunamis range from 700,000 to 1.5 million.

Most roads were terrible before the tsunami.

There are minefields in the north and flooding in the south. The most obvious immediate priorities are creation of refugee camps and clean water supplies. But long-term planning to rebuild must also begin.

Coordination with the government, the Tamil Tigers and among myriad relief agencies poses the biggest challenge. They meet daily to share information and resources, but tensions arise.

"It's expected. People are still trying to find their way on how to coordinate, where to go, what is needed," he said.

There are signs of hope. Both the army and the Tamil Tigers have been heroic, he said.

"Political parties that have caused tension in the country have come to the rescue of their opposition," he said.

This story has been posted in the following forums: : Headlines; COS - Sri Lanka; Service; NGO's; Tsunami

Dear Sir,
With the appretiation for your great work in the last 10 months with the disatreaous situation caused by the Tsunami, this I wish you to bring you with great expect, for inviting you to another good work, which you can contribute alot.
We are conducting a Cricket Academy in the Kurunegala district, for the benifit of the younger gegeration in and around the Kurunegla district. With the poverty and unbalanced economical structure most of the children in this part of the island have been refrained from involving in this game. As a result of that they are not given enough opportunities to play this game. They have got lots of skills and talents to play in higher standards.
So I have started this Cricket Academy in the Kurunegala district to serve them to the best of I can. No need to say that this is not a simple task as an individual and I expect lots of contributions people in and around Sri Lanka.
So if you have a chance of making some contribution, I am very much be pleased and will be grateful.
Yours faithfully,
Baratha Herath